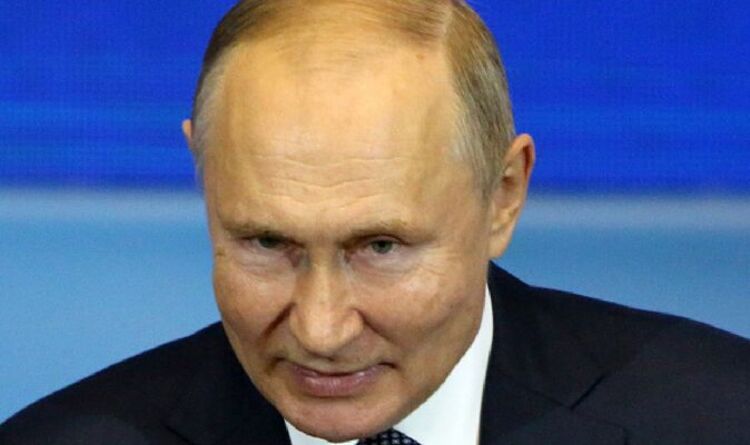 Russia will extend military drills in Belarus that were due to end on Sunday, the Belarusian defence ministry announced, in a step US Secretary of State Antony Blinken said made him more worried about an imminent Russian invasion of Ukraine.

NATO says Russia could use the troops in Belarus as part of an invasion force to attack Ukraine. Moscow denies any such intention.

But according to Mark Urban, Diplomatic Editor for BBC Newsnight, observers are noticing the possibility the Russian President may be employing NATO’s own tactics against Yugoslavia to troll the West.

He said: “Some Russian observers have mentioned that Putin may be planning to pattern operations closely on NATO’s 1999 campaign against Yugoslavia over Kosovo.

“Early steps seem to confirm this: Putin’s use of ‘genocide’ plus the creation of a ‘refugee crisis’ by removing Donbas citizens.

“If Russia goes for this NATO ‘Kosplay’ we can expect strikes throughout Ukraine as an instrument of coercion, thus Biden suggestion on Friday that Russia would ‘strike’ Kiev (not drive there), may mirror NATO actions against Belgrade and infrastructure targets like Novi Sad bridge.

“It should be noted that the Russia military build up includes Iskander missiles, kalibr cruise missiles, and squadrons of jets, all of which could be used to strike targets deep in Ukraine in an attempt to break Zelensky government.

“In this Russian Kosplay scenario, ground forces would move into the Donbas to drive back Ukrainian forces ‘avert the risk of genocide’ and might even use ‘peace-keeping’ tactic deployed in other post-Soviet interventions.

“By mirroring the tactics and messages employed by NATO in 1999 the Kremlin might hope not just to troll the western alliance on a historical scale, and underline the aggressive character of NATO seen from Moscow, but to maintain that its actions were justified by precedent.”

Kremlin spokesman Dmitry Peskov said the repeated warnings by the West that Russia was about to invade were provocative and could have adverse consequences, which he did not spell out.

Russia says the West has raised tensions by sending NATO reinforcements to eastern Europe during the crisis.

Western countries are preparing sanctions they say would be wide-reaching against Russian companies and individuals in case of an invasion.

British Prime Minister Boris Johnson said in a BBC interview that such sanctions could include restrictions on Russian businesses’ access to the dollar and the pound. However, he acknowledged such threats may not deter Moscow.

Ukraine’s Foreign Minister Dmytro Kuleba said it was time for the West to implement at least part of the sanctions it has prepared.

He said: ”Russia has to be stopped right now. We see how events are unfolding.”

The focus of tensions in recent days has been on the swathe of eastern Ukraine that Russian-backed rebels seized in 2014, the same year Russia annexed Crimea from Ukraine. More than 14,000 people have been killed in the conflict in the east.

Ukraine’s President Volodymyr Zelenskiy called on Sunday for an immediate ceasefire in the eastern part of the country.

Kiev’s Western allies are concerned Russia might use the escalation as a pretext for wider conflict.

On Sunday, a Reuters reporter heard explosions in the centre of Donetsk city in the eastern Donbass region controlled by separatists. Heavy shelling was heard elsewhere in the region.

More than 30,000 people from Donetsk and nearby Luhansk have crossed the Russian border in the past 24 hours, TASS news agency said, quoting authorities in Russia’s Rostov region. The separatists began evacuating residents on Friday saying Ukraine was planning to attack – which Kiev denies.

Local military forces in one of the separatist areas, Luhansk, said on Sunday that two civilians had been killed and five buildings damaged in shelling by the Ukraine military.

Russia’s Investigative Committee will investigate the case, the RIA news agency quoted it as saying.