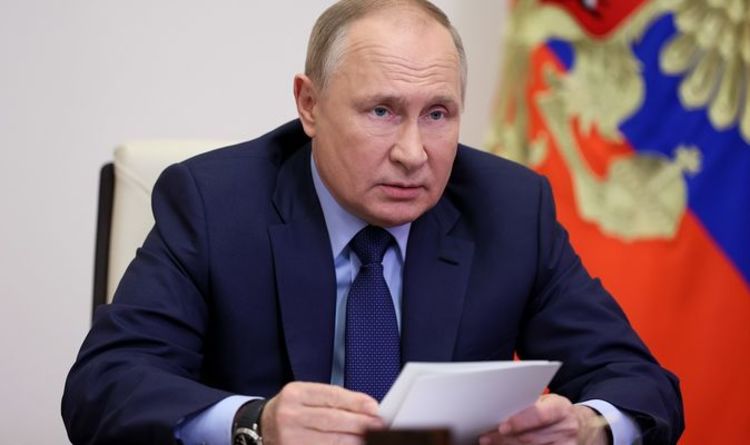 The new drone swarm control system was presented by the Russian tech firm Kronshtadt at the Dubai Airshow 2021. The drones can be mounted on an aircraft or a warship to create an integrated information space for Russia’s combined armed forces.

A representative from Kronshtadt told Russian News Agency, TASS: “The new automated operator’s workstation to control a swarm of drones presented at the Dubai Airshow 2021 can be mounted on an aircraft or a warship.

“Therefore, this makes it possible to outfit airborne and shipborne carriers with this equipment and exercise control of groups of drones in the interests of Russian combined arms forces.”

This new technology will make it possible for the Russian military to create network-centric systems for combat operations.

The representative added: “This will ensure integration into the single information space of combat data and control systems of aircraft and ships.”

This comes after Mr Putin boasted Russia’s new hypersonic nuclear weapons is capable of wiping out US cities.

The Russian leader revealed his country has developed a weapon that flies more than five times faster than those being developed in the US.

While addressing an energy forum, Mr Putin said nowhere is directly under threat.

He said: “This is not just a hypersonic, this is an intercontinental missile.

“This is a much more serious weapon than you just said.

“And they are already on alert in Russia.”

The Russian President continued: “There is nothing unusual here.

“The high-tech armies of the world will have such systems, they will, and in the near future.

“We do not abuse this, we do not threaten anyone.”

This came just days after Moscow revealed it had successfully test-fired its new Zircon hypersonic missile from a submarine for the first time.

Footage from the launch showed the 6,679mph rocket being fired from the submarine Severodvinsk before streaking into the sky.

Fears erupted earlier this month after it was suggested Moscow could sell China and India advanced weapons.

Under the terms of new export deals being considered by military-industrial bosses in Moscow, the advanced S-500 launcher could soon be shipped to China and India.

Speaking to business daily RBK, Dmitry Shugaev, director of the Federal Service for Military-Technical Cooperation, said the weapons would first be deployed in Moscow’s defence forces.

He said: “When the system has been delivered to the Russian Army in the required volume, it will also be possible to support it for export.

“We consider India, as well as China, and all the states with which we have long-standing and predictable partnerships, as potential future owners of the system.”

Mr Putin announced the first of the S-500 anti-aircraft launchers would be handed over to combat troops within the next few years.

This comes under his plans to modernise his country’s military equipment.

Moscow has claimed the S-500 is the most advanced weapon of its kind and is capable of taking out high-speed warplanes.

It could even have the potential to take out hypersonic weapons in near-Earth orbit.