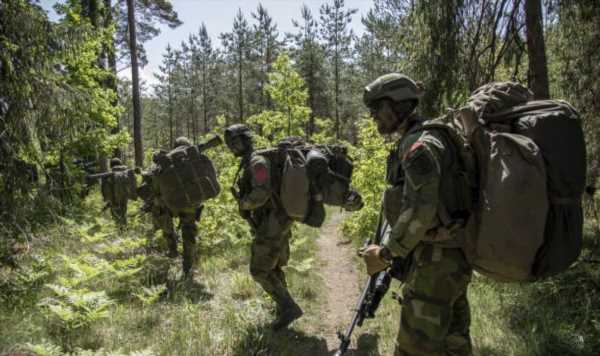 Jets pretending to be hostile flew over Poland and the Baltic states as part of the display, as fears continue to grow that the war in Ukraine could spill over into NATO territory.

Defence ministers from the “northern group” of countries, including the UK, gathered in Iceland for talks on the ongoing crisis.

Iceland’s foreign minister Thordis Gylfadottir warned those gathered that they must prepare for the “worst-case scenario” when it comes to Putin’s intentions.

She said: “The threat of a direct military aggression against a NATO country can no longer be excluded.”

Around 30,000 NATO troops are thought to be taking part in the exercises from 17 allied countries, with the British contribution including 100 soldiers from the 7th Air Defence Group based at Amari in Estonia and Ustka in Poland.

The commander of Allied Air Command General Jeffrey Harrigian said: “Given the current security situation following the Russian invasion of Ukraine, large-scale training exercises like this are now more important to NATO than ever.”

Defence secretary Ben Wallace added that it was important for NATO to be “deeply wary” of Moscow due to their disregard for the independence of Estonia, Latvia and Lithuania.

He added: “He feels no compulsion about breaking people’s borders.

“Whether he would be silly or foolish enough to do that in an overt manner with a cruise missile remains to be seen but he would be dealing then with NATO.”

Polish deputy defence minister Wojciech Skurkiewicz said: “We realise the threats and the dangers that are lurking not only in connection with the Russian aggression in Ukraine but also the hybrid activities in Belarus.”

The Russian President has been accused of perpetuating Nazism through the setting up of filtration camps and carrying out mass executions.

However, Mr Wallace noted that Russia was lacking in sufficient troops to occupy Ukraine, adding that he needed as many as 800,000.

He continued: “Occupying people who don’t want to be occupied is not an easy thing to do. The Nazis learnt that all over Europe.”

Russia has now been accused of stealing grain from Ukraine for resale, as President Zelensky has asked for more anti-ship missiles to protect vessels carrying grain from the Black Sea.

The invasion of Ukraine has impacted food supplies to countries around the world, as the country exports over 40 million tonnes of grain per year.