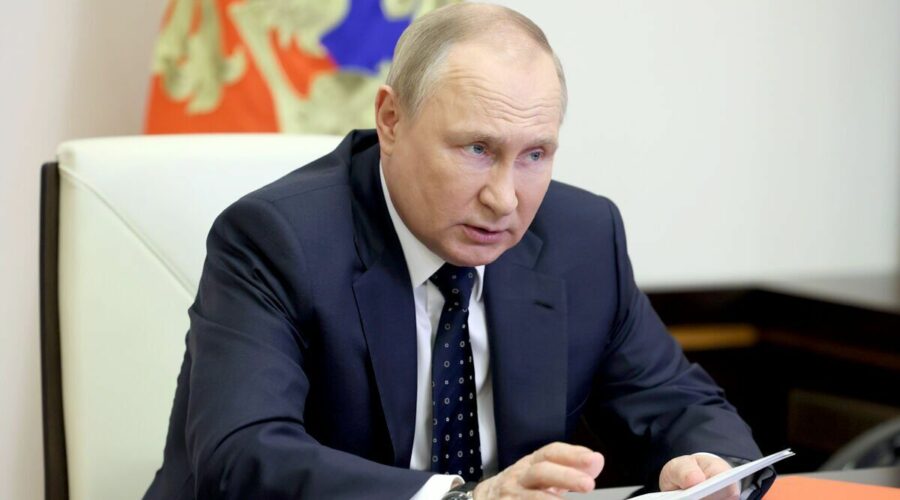 The claims were made by Christopher Steele, who was in charge of the Russian desk at MI6 for three years between 2006 and 2009. Speculation about the Russian leader’s health has reached fever pitch in recent weeks. An unnamed Russian oligarch reportedly said Putin was “very ill with blood cancer” in a leaked audio recording that was published by the US magazine New Lines.

Despited repeated assertions by the Kremlin that the Russian despot is fighting fit, the rumours have refused to go away.

In an interview this week with LBC, Mr Steele said the Russian president was “increasingly ill” and had a team of doctors on hand at all times.

The former spy also claimed that Putin’s illness was creating a power vacuum at the heart of Russian politics, which threatened to undermine his regime.

He explained: “Our understanding is that there’s increasing disarray in the Kremlin and chaos.

“There’s no clear political leadership coming from Putin, who is increasingly ill, and in military terms, the structures of command and so on are not functioning as they should.”

He added: “What we do know is that he’s constantly accompanied around the place by a team of doctors.”

He noted: “It’s certainly having a very serious impact on the governance of Russia at the moment.”

Major General Kyrylo Budanov told Sky News last week that a coup was underway and could not be stopped.

He said: “This process has already been launched.

“They are moving in this way and it is impossible to stop it.”

It comes as fierce fighting continues across the Donbas region between Ukrainian and Russian forces.

Putin’s army is reported to be making a major push to capture the city of Severodonetsk.

In their daily war briefing for May 20, analysts at the Institute for the Study of War (ISW) wrote: “Significant Russian offensive operations are confined to the area of Severodonetsk.

“Russian troops have made marginal gains to the north, west, and south of the city, especially around Popasna, in order to attempt to take control of Severodonetsk.”

Local governor Serhiy Haidai said the Russians were “destroying” the city as they gradually surrounded it.

Writing on the messaging app Telegram, he said his troops had repelled 11 attacks on the frontline – with eight tanks among the Russian vehicles destroyed.

Meanwhile Ukrainian president Volodymyr Zelensky said today that the war can only be resolved through “diplomacy”, amid a deadlock in negotiations between Kyiv and Moscow.

Speaking on Ukrainian TV, he said: “The end will be through diplomacy.

“The war will be bloody, there will be fighting, but it will only definitively end through diplomacy.”