Once upon a time, a playground was complete if it had a metal slide, monkey bars and a big concrete pipe. 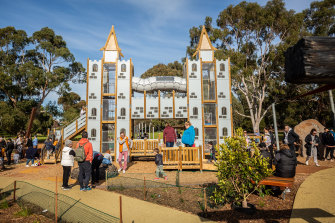 There’s a castle, too: the centrepiece of Thomas Street Playground in Hampton is a three-level castle.Credit:Scott McNaughton

Budgets for these schmick mini-villages often exceed $1 million. Users share intel on social media and will cross Melbourne to visit a hotspot.

But when the Thomas Street Playground in Hampton opened two weeks ago, it raised the bar for a “destination playground”.

Bayside City Council shelled out $3 million on this play paradise, whose centrepiece is a three-level castle.

The playground also has a giant turning barrel — already dubbed the hamster wheel — a parkour course and a DJ booth.

Yes, there is a water feature (with a water-spurting dragon kids can sit on), along with trampolines, a child-propelled merry-go-round, and quirky animal sculptures. 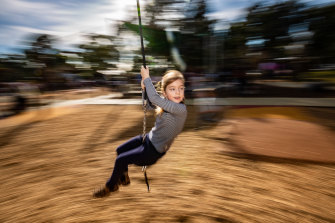 Nothing but fun: Ava Ansalone, 6, on the flying fox at Thomas Street playground in Hampton.Credit:Scott McNaughton

Many features, such as the flying foxes and the swings, are all-abilities accessible.

The playground is attracting rave reviews on social media, but also comments about big crowds and full car parks.

Said herladyfitz on the mammaknowssouth Instagram page: “that looks amazing! Might have to wait a couple of months for the crowds to die down but looks epic!”

It’s the latest in a string of mega playgrounds springing up. Glen Eira council and the state government funded the sprawling, $1.5 million Booran Reserve playground in Glen Huntly. 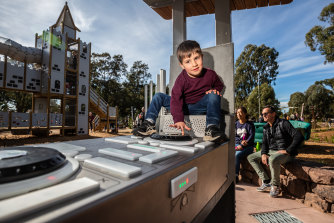 Alexander, 4, plays on the DJ booth at the new Thomas Street playground in Hampton.Credit:Scott McNaughton

Ms Jeavons said destination playgrounds could accommodate more people without a backyard at home and were good spots to meet friends or relatives. She said playgrounds were offering more plant and water features, and better access for people with disabilities.

Ric McConaghy, designer of the Thomas Street Playground, said playgrounds today were more thoughtful and inclusive than in the past.

The Hampton site, for which there was extensive community consultation, didn’t set out to be the biggest or boldest.

The sentiment was echoed at Thomas Street on Sunday.

Alex Ansalone, 44, his partner Kerstin Villanueva, 33, and Alex’s daughter Ava, 6, drove for 30 kilometes — 40 minutes — from Altona, in Melbourne’s west, to meet Ava’s auntie and two cousins, (who live in Bentleigh) at the new Hampton playground.

Ava fell in love with the flying fox, lining up for it again and again and zipping along in bliss.

Mr Ansalone said it was “a stunning park”, and a lot of thought had gone into its design. “I think it’s ‘the park to be at’ in Melbourne at the moment,” he said.

He said maybe instead of lots of little parks, it would be better to have one big memorable park “like a Disneyland” in every suburb.

Ross Burt, of Brighton, said his sons Alexander, 4, and Lucas, 2, couldn’t get enough of the DJ booth — a mock console of turntables, and of buttons that light up and emit tones when pressed.

Mr Burt said Alexander is “quite fascinated because he’s never seen anything like this before”.

Mr Burt said the council paying $3 million for the playground was “a lot of money” but was worth it, especially during the COVID-19 pandemic. “I think it allows us to get children outdoors and not being in front of the television”.

His rates may be paying for the playground, but he said, “I’m quite happy for them to be contributing towards this”.