The protesters, many in masks and wearing black, threw several petrol bombs, some taking off down narrow side streets in the pouring rain. Water cannon have never been used until now in years of anti-government protests.

The MTR rail operator had suspended some services to try to prevent people gathering. But tens of thousands of protesters, calling for democracy for the former British colony, made it to a sports stadium in the vast container port of Kwai Chung, from where they marched to nearby Tsuen Wan.

Some dug up bricks from the pavement and wheeled them away to use as missiles, others sprayed detergent on the road to make it slippery for the lines of police. Clashes spread in many directions as protesters broke shopfront windows and threw tear gas canisters back at police.

The vast majority marched peacefully as a large contingent of protesters split up, radiating out to at least four other locations across Hong Kong to launch smaller, wildcat demonstrations that police sought to disperse, sometimes with tear gas.

There was a sense of chaos across swathes of the Kowloon peninsula, over the harbor from the main island of Hong Kong, with police sirens blaring, tear gas wafting throughout densely populated areas and running clashes on the streets.

The clashes on Saturday and Sunday marked a return to unrest after days of calmer demonstrations. The protests, which started in June over a now-suspended extradition bill, have rocked Hong Kong for three months, occasionally causing serious disruption including unrest at the airport.

Police in Tsuen Wan had warned earlier they would launch a “dispersal operation” and told people to leave.

Hundreds of protesters remained long after nightfall, discussing what to do next, surrounded by empty tear gas canisters, bricks, metal railings and other debris.

Some “radical protesters” removed railings and set up barricades with water-filled barriers, bamboo scaffolding, traffic cones and other objects, police said in a statement.

“Such acts neglect the safety of citizens and road users, paralyzing traffic in the vicinity,” they said.

One policeman fired a pistol shot into the air, police told media. There was no response from the police on whether it was a live round. 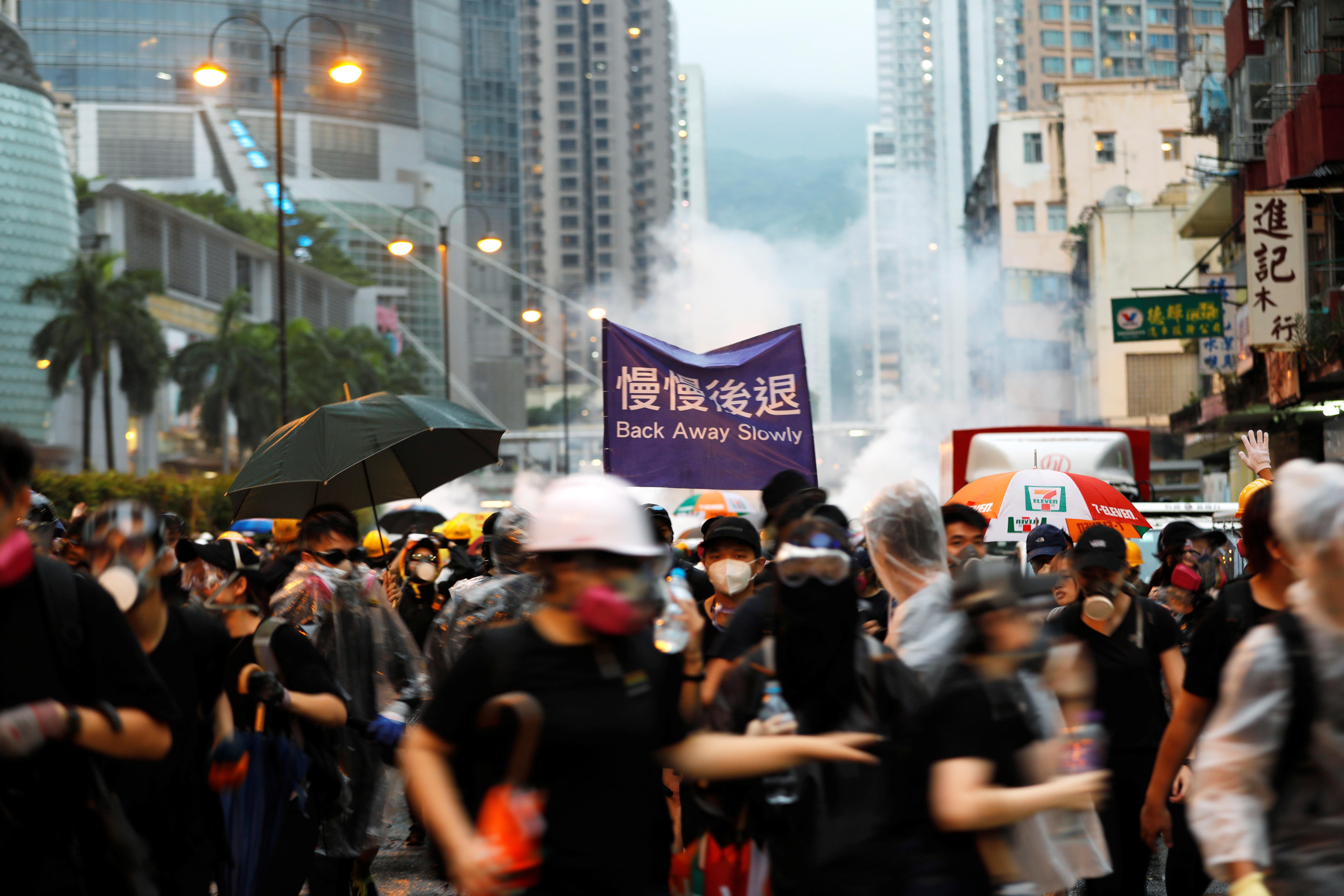 Activists threw petrol bombs and bricks on Saturday in the gritty industrial district of Kwun Tong, on the east of the Kowloon peninsula.

The city, a major Asian financial center, is facing its biggest political crisis since the handover of power from British rule in 1997. Protesters say they are fighting the erosion of the “one country, two systems” arrangement under which Hong Kong returned to China with the promise of continued freedoms, not enjoyed on the mainland, for 50 years.

M. Sung, a 53-year-old software engineer in a black mask like many of the older, middle-class citizens at the march earlier on Sunday afternoon, said he had been at almost every protest and would keep coming.

“We know this is the last chance to fight for ‘one country, two systems’, otherwise the Chinese Communist Party will penetrate our home city and control everything,” he said.

“If we keep a strong mind, we can sustain this movement for justice and democracy. It won’t die,” Sung said.

Police said they strongly condemned protesters “breaching public peace” and that 19 men and 10 women had been arrested after Saturday’s violence. More than 700 have been arrested since the demonstrations began in June.

The protests pose a direct challenge for Communist Party leaders in Beijing, who are eager to quell the unrest ahead of the 70th anniversary of the founding of the People’s Republic of China on Oct. 1. 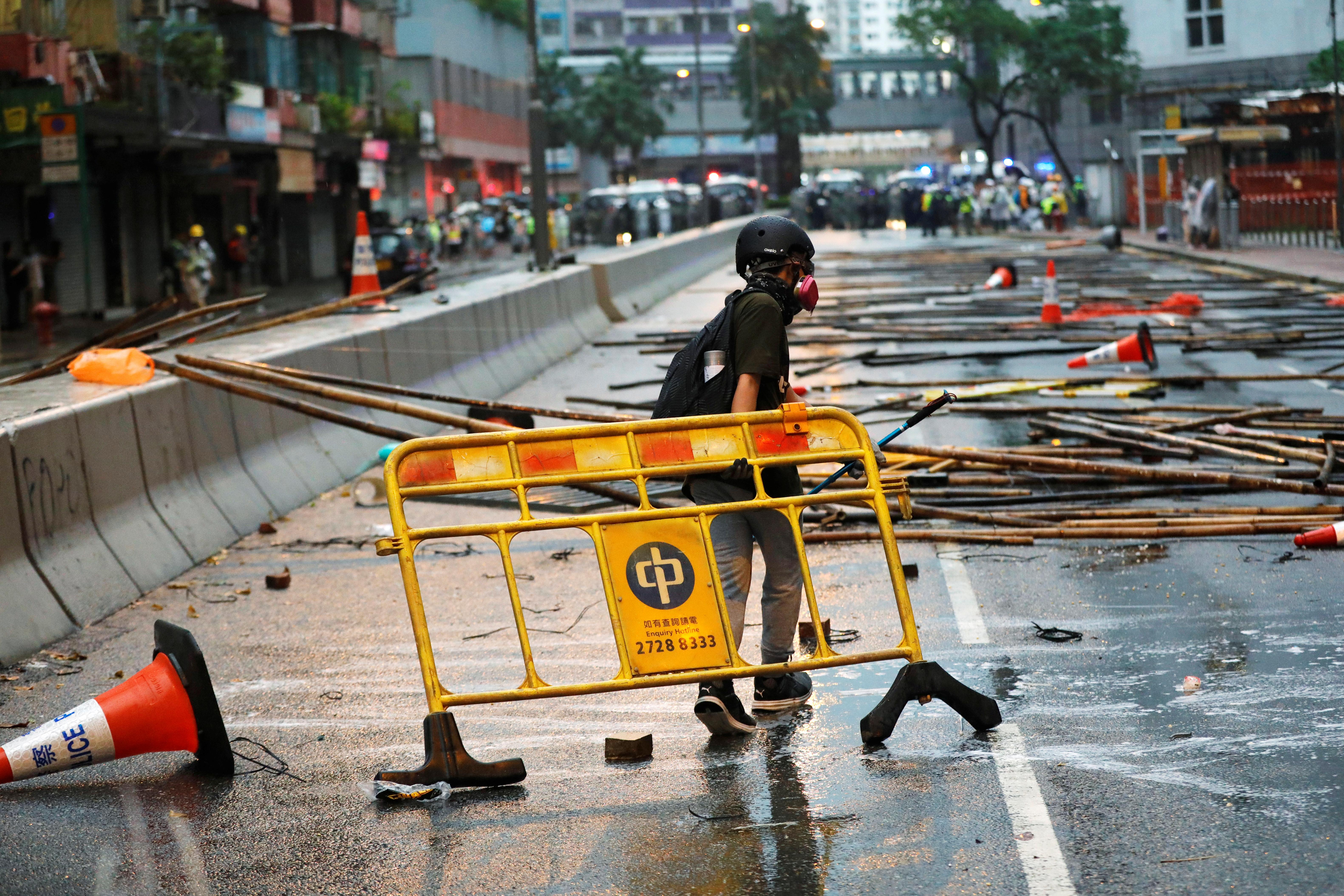 Beijing has sent a clear warning that forceful intervention is possible, with paramilitary forces holding drills just over the border.

The neighboring gambling territory of Macau, a former Portuguese colony that returned to Chinese rule in 1999, elected former legislature head Ho Iat Seng as its leader on Sunday – the sole approved candidate.

Ho, who has deep ties to China, is expected to cement Beijing’s control over the “special administrative region”, the same status given to Hong Kong, and distance it from the unrest there.