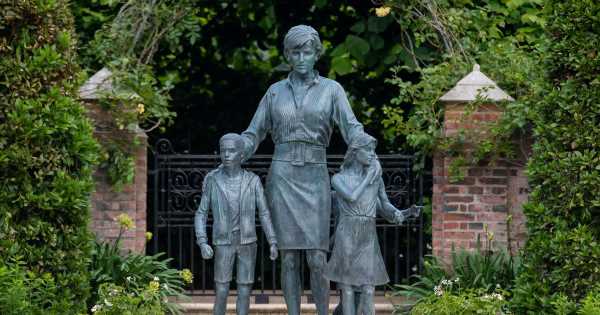 A statue of Princess Diana standing with her arms around two children was unveiled to mark what would have been her 60th birthday – but there was a third child hidden behind her.

The new memorial of the Princess of Wales was unveiled today by her two sons, The Duke of Cambridge and Duke of Sussex.

Prince William and Prince Harry reunited for the unveiling of their late mother's statue which shows Diana surrounded by three children representing her passion for humanitarian work.

But the third child seems to be hidden in the background, as it is only visible from the side and back – did you spot it?

Diana is portrayed with her hands resting on the shoulders of a boy and a girl, while another boy appears to be trailing behind them.

Social media was abuzz with royal fans trying to glimpse the third child, as the first official photos released from the private event only showed the statue head-on.

According to Kensington Palace, the children represent the “universality and generational impact” of the late Princess' work.

They also said Diana had “gained confidence in her role as an ambassador for humanitarian causes” and that the statue “aims to convey her character and compassion.”

The statue was first commissioned by her two sons several years ago in 2017 to later be unveiled on what would have been her 60th birthday.

Harry and William said in a joint statement: “It has been twenty years since our mother's death and the time is right to recognise her positive impact in the UK and around the world with a permanent statue.

"Our mother touched so many lives. We hope the statue will help all those who visit Kensington Palace to reflect on her life and her legacy.

It was created by sculptor Ian Rank-Broadley, who is well known to the royals and also designed the Queen’s head which can be seen on UK coins.

Ian's statement about the unveiling said: “We wanted to capture her warmth and humanity while showcasing the impact she had across generations.

"I hope that people will enjoy visiting the statue and the Sunken Garden, and taking a moment to remember The Princess.”