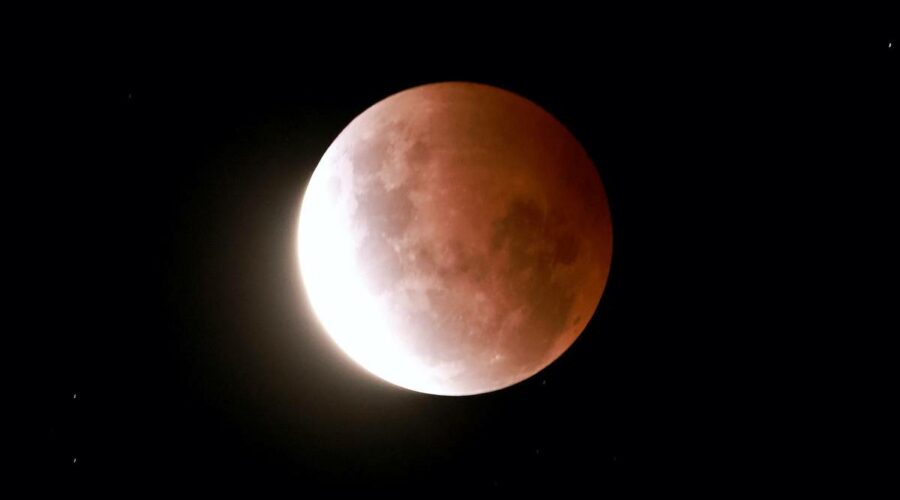 Kiwi stargazers were treated to a “spectacular” and “once-in-a-lifetime” lunar spectacular overnightas the blood supermoon rose into the night sky.

Amateur astronomers across the country spent much of the night gazing into the stars to catch a glimpse of the event.

“The incredible thing was not just the moon but the whole night sky, the stars. As the moon got darker, you could see more and more stars. The sky began to light up in a way I’ve never seen before in Auckland.

“We looked at it through binoculars, it was stunning to see that glowing orange colour.

“Just seeing the night sky reminds us of how big the universe is and for me personally, this is god’s creation and fully on display.”

At 11.35pm, a slither of light remained on one side of the moon while the rest of it had an orange glow, he said.

Invercargill resident Stovan Campion has been watching the moon all night.

“It was really moving.”

Renee Mason in Pureora Forest, north of Taupō, said just after the 10pm the moon was turning a deep red colour.

“It’s red on one side and white on the other.”

She said there was also a “ridiculous” amount of stars.

“I’ve never seen the Milky Way in this detail. There are thousands of stars out.”

Weather conditions were good for viewing the moon, with clear skies across much of the country.

Images of the glowing white sphere low on the horizon have been sent in by Herald readers.

One shows it silhouetted against Auckland’s Sky Tower. Another shows it hovering above Wellington’s Oriental Parade.

The lunar eclipse started officially at 8.47pm but the real show did not happen until 11.11pm when a total lunar eclipse made the giant moon flush red.

Steven, an astronomer near Kaitaia, earlier told Newstalk ZB the moon would most likely be a salmon pink colour, rather than red.

“I could be wrong, I don’t think it will be real red. Salmon pink more likely,” he said.

“The moon is in the constellation of Scorpio and just to the right of the moon is a bright red star called Antares.

“If people are seeing a halo, it’s because of the moisture in the atmosphere and the moon’s light being refracted through those drops of water. But if the sky is clear there’s no halo.”

He said he didn’t think you’d be able to see any colour until the moon had fully eclipsed as the light of the moon would be too bright.

“It’s coming into the final stage [of the eclipse].”

Blockhouse Bay resident Divesh Azad said at 10.45pm he could see a halo around the moon and a small amount of red.

Auckland resident Joey Withers said at 10pm around a quarter of the moon was under the shadow of the eclipse.

About 50 people were at Ward Observatory in Whanganui, with queues out the door of people waiting for their turn to take a peek at the moon.

The observatory is home to the largest unmodified refractor telescope still in use in New Zealand, built in 1901.

Whangamatā resident Bronnie Baxter said the moon was massive as it rose over the ocean near Hauturu/Clark Island.

“It’s just really clear and white and beautiful. It definitely has a nice aura about it.”

The moon was so bright it could be seen through the clouds, she said.

“We can’t wait to watch it do its thing later,” she said, adding that she was keeping her kids up for the 11.11pm viewing.

“There was much awe- inspiring sounds from the little kids.”

The first thing Joe – who is obsessed with stars, planets and dinosaurs – said was ‘wow the moon [is] orange’.

What is a blood supermoon?

We can think of it as the combination of two lunar spectacles.

Blood moons – also known as total lunar eclipses – occur when the Earth lines up between the Moon and the Sun.

This hides the Moon from sunlight and blocks most of the blue light, with the remaining light refracting onto the Moon’s surface and causing a red glow.

“Red light is often seen during sunset because we view it through the thicker parts of Earth’s atmosphere, and being of a longer wavelength, more red light gets through,” Stardome Observatory expert John Rowe said.

“When the Moon goes into Earth’s shadow, the reddish light passing through Earth’s atmosphere around the limb of Earth refracts onto the Moon, creating a blood-red colour across the lunar surface.

“Unlike solar eclipses, lunar eclipses are completely fine to view with the naked eye.”

A “supermoon”, meanwhile, occurs when the Moon is at the closest point in its orbit around Earth – making it appear about 14 per cent larger than a normal full Moon and around 30 per cent brighter.

How rare is it?

Total lunar eclipses are relatively common – the next one after tonight’s is May 15-16, although it won’t be visible from New Zealand.

Supermoons are more common still – one was visible only a month ago.

There are also two super new moons – or when a new moon is at its closest point to Earth – on November 4 and December 5.

But it’s the combination of a total lunar eclipse and a supermoon that’s rare.

The eclipse takes place just a few hours after the Moon reaches perigee, the closest point to Earth on its orbit, making it a “Super Flower Blood Moon”.

Yet there’s no single, specific and universally recognised definition of a supermoon, which isn’t a formal astronomical term.

Nasa says a “supermoon” can be used to describe a full Moon that comes within at least 90 per cent of perigee.

TimeandDate.com prefers a definition of 360,000km – and considers that the 2018 event was “almost” a supermoon.

How can I photograph it?

Stardome astronomy educator and astrophotographer Josh Kirkley earlier offered tips on how to get the best shot of the spectacle.

“Look for clear unobstructed night sky views. The blood supermoon will be visible high in our sky so you should be able to find a good spot wherever you are in New Zealand,” Kirkley said.

“When the Moon goes into Earth’s shadow – just before 9pm – the reddish light passing through Earth’s atmosphere will be refracted onto the Moon, creating a blood-red colour across the lunar surface.”

Kirkley said anyone who wanted real photos would need a DSLR or mirrorless camera, with interchangeable lenses.

“Phone cameras just won’t cut it for a nice clear shot,” he said.

“Many standard cameras come with 18-50mm lenses, but I’d recommend lenses closer to the 300-600mm mark to get crisp close-up shots of the Moon.”

The higher the number, he said, the better.

28/05/2021 World News Comments Off on Photos: Blood supermoon rises over New Zealand – ‘spectacular’, ‘once in a lifetime’
Markets