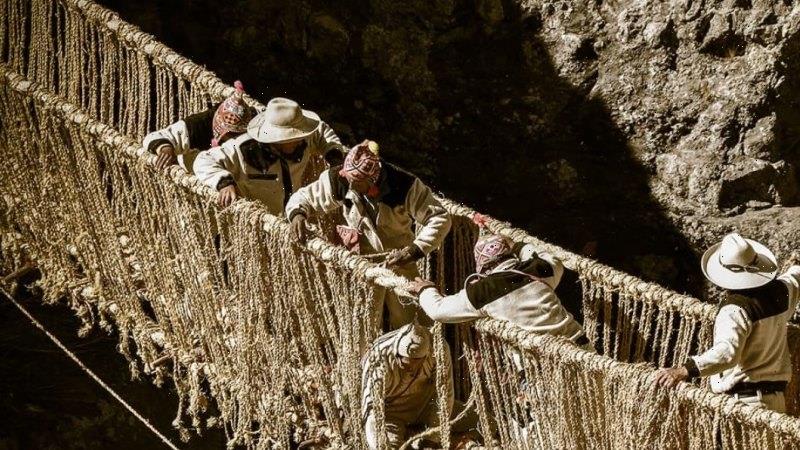 Lima: Peruvians from the Huinchiri community in Cusco region are rebuilding a 500-year-old Incan hanging bridge, made using traditional weaving techniques to literally string a crossing together spanning the Apurimac river far below. 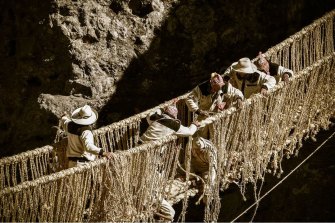 The Q’eswachaka bridge has been used for more than 500 years to connect communities divided by the river. It is maintained by locals every year, but during the COVID-19 pandemic it fell into disrepair and collapsed in March.

Members of the affected communities, such as the Huinchiri, decided to rebuild the 30-metre-long bridge in the traditional Incan woven style.

Teams of workers, starting from both sides of the ravine and balancing on giant main ropes that had been stretched over the river, worked towards the centre putting in place smaller ropes as barriers between the handrail ropes and the walkway’s floor.

“Last year because of the pandemic, it wasn’t strengthened … That is why at the beginning of this year the bridge fell,” said Cusco Regional Governor Jean Paul Benavente.

“But now it is like an answer to the pandemic itself. From the depths of the Peruvian Andean identity, this bridge is strung up across the Apurimac basin and we can tell the world that we are coming out if this little by little.” 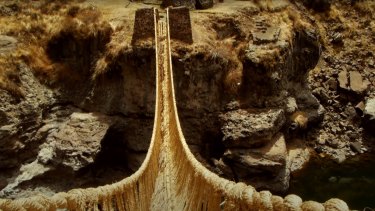 The Q’eswachaka bridge across the Apurimac in Peru.Credit:Screenshot/SmithsonianNMAI

In 2013, UNESCO recognised the skills and traditions associated with the reconstruction of the Q’eswachaka bridge as Intangible Cultural Heritage of Humanity.

Peru is rich in ancient treasure. It has hundreds of sites that date back thousands of years and span dozens of cultures, including the ancient Incan empire that was in power when Spanish explorers arrived in the early 1500s.

“This is history. More than 500 years of a paradox in time. The Q’eswachaka, this Incan living bridge, is really an expression and cultural manifestation,” added Benavente.

“This is community, in this particular case, the Huinchiri community from the Quehue district is currently working to string up this bridge that connects villages, but that also connects traditions and connects culture.”

Meanwhile, Peruvian socialist candidate Pedro Castillo claimed victory in the presidential election on Tuesday (Wednesday) after clinging on to a narrow lead as the lengthy vote count ended, although his right-wing rival pledged to fight the result and has yet to concede. 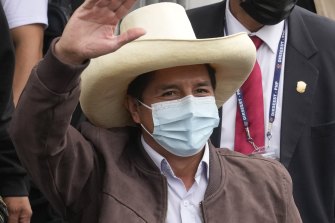 Presidential candidate Pedro Castillo waves to supporters as he leaves his campaign headquarters in Lima, Peru, on Tuesday.Credit:AP

Castillo ended the count 44,058 votes ahead of Keiko Fujimori, who has made allegations of fraud with little proof and has tried to get some votes annulled. The result of the June 6 ballot has not been formally announced by electoral authorities, but Castillo hailed the win on Twitter.

“A new time has begun,” Castillo wrote, alongside a picture of himself with arms raised, the word ‘President’ in large font and his campaign slogan: “No more poor in a rich country.”

He also updated his Twitter profile to include “President-elect of the Republic of Peru (2021-2026).”

Fujimori, addressing supporters at a rally in downtown Lima on Tuesday, pledged to keep fighting and “defend Peru’s democracy”. She hoped the result would swing her way once ballots that her party was seeking to annul have been checked.