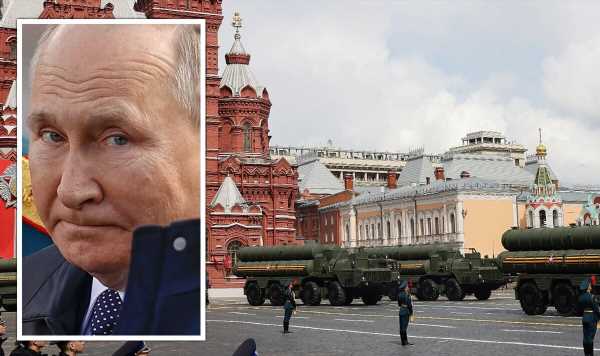 The annual Victory Day, which is a commemoration of Russia’s defeat of Nazi Germany in World War Two, took place in Moscow on Monday in the midst of the brutal invasion of Ukraine. But a planned flypast by a “Doomsday” plane, designed to protect Vladimir Putin in the event of a nuclear attack was notably absent from the event in Red Square. The plane, and other military aircraft, had taken part in earlier rehearsals. The Kremlin said the military flypasts had been cancelled because of “adverse weather conditions” at the time of the Victory Day Parade.

But video and pictures from the Russian capital showed blue skies with only a smattering of clouds, with some analysts suggesting the aerial displays may have been cancelled due to security concerns.

This is a theory that is being suggested by economist and author Anders Åslund, an expert in Russia, Ukraine and Eastern Europe, who believes Putin may have been fearing for his life.

He wrote on Twitter: “The great mystery from Putin’s Victory Parade is why the traditional and promised air show did not take place.

“Was paranoid Putin afraid that somebody would kill him with a missile?

“Or was he afraid that Ukraine would shoot a plane down with a manpad?”

The decision was shrouded in mystery, with no explanation given for that abrupt cancellation.

Separately in Novosibirsk, military flyovers were also scrapped in the city’s Victory Day commemorations “due to adverse weather conditions at departure airfields”.

This year’s celebrations took place against the backdrop of Russia’s ongoing war with Ukraine.

During his speech in Moscow on Monday, the Russian President looked to cast his country’s military assault on Ukraine as a forced response to Western policies and a necessary move to ward off a potential aggression.

Little detail on Russia’s plan was given away by Putin, who drew parallels between the Red Army’s fighting against the Nazi troops and the Russian forces’ action in Ukraine.

He gave no indication of a shift in strategies and made no suggestion he was about to declare a broad mobilisation, as some around the world have continued to fear.

Putin insisted the campaign in Ukraine was needed to avert what he described as “a threat that was absolutely unacceptable to us (that) has been methodically created next to our borders.”

The Russian leader again launched a blistering attack against the West for failing to take notice of Russian demands for security guarantees and a U-turn on the expansion of NATO, arguing that it left Moscow no other choice but to launch an action in Ukraine.

He made clear Russian troops were fighting for the country’s security in Ukraine and called a minute’s silence to remember the soldier’s who had died in combat.

Putin also told troops and volunteers fighting in the eastern Ukrainian Donbass region were fighting for their Motherland.

The Russian President said: “You are fighting for your Motherland, its future.

“The death of every soldier and officer is painful for us.

“The state will do everything to take care of these families.”