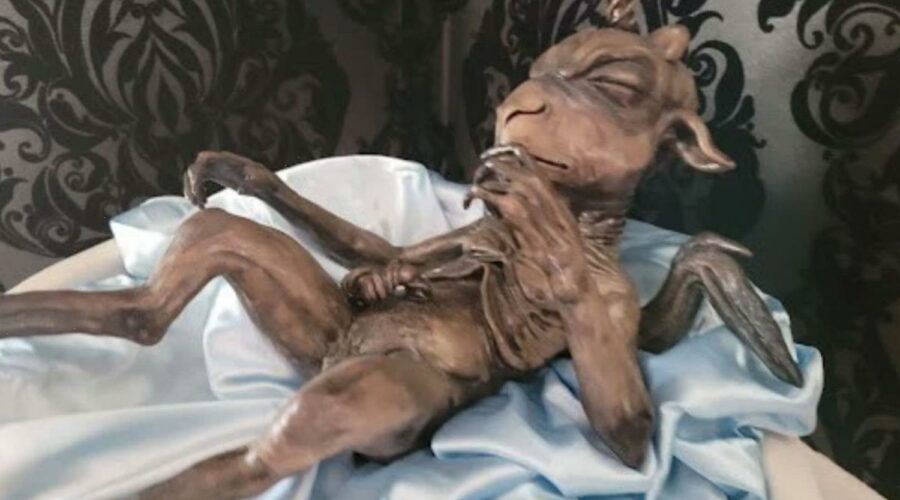 A SATANIC Temple has sparked outrage after displaying a demonic baby next to a nativity scene at a statehouse and shouting "Hail Satan!"

The Satanic Temple of Illinois put up a controversial holiday display under the State Capitol dome in Springfield, Illinois, this week, depicting the gnostic idol Baphomet as a newborn. 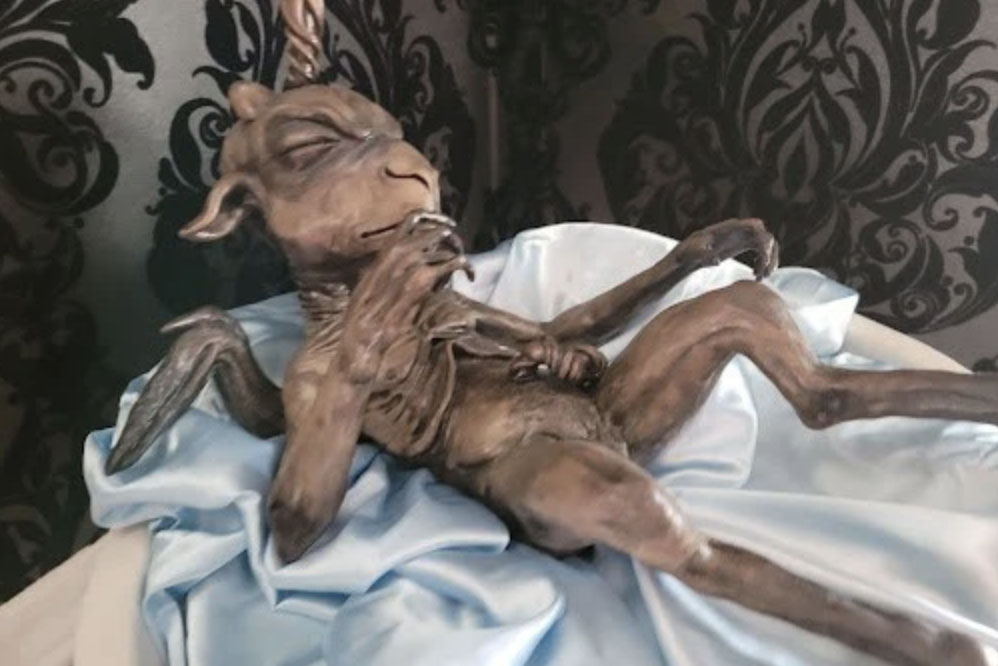 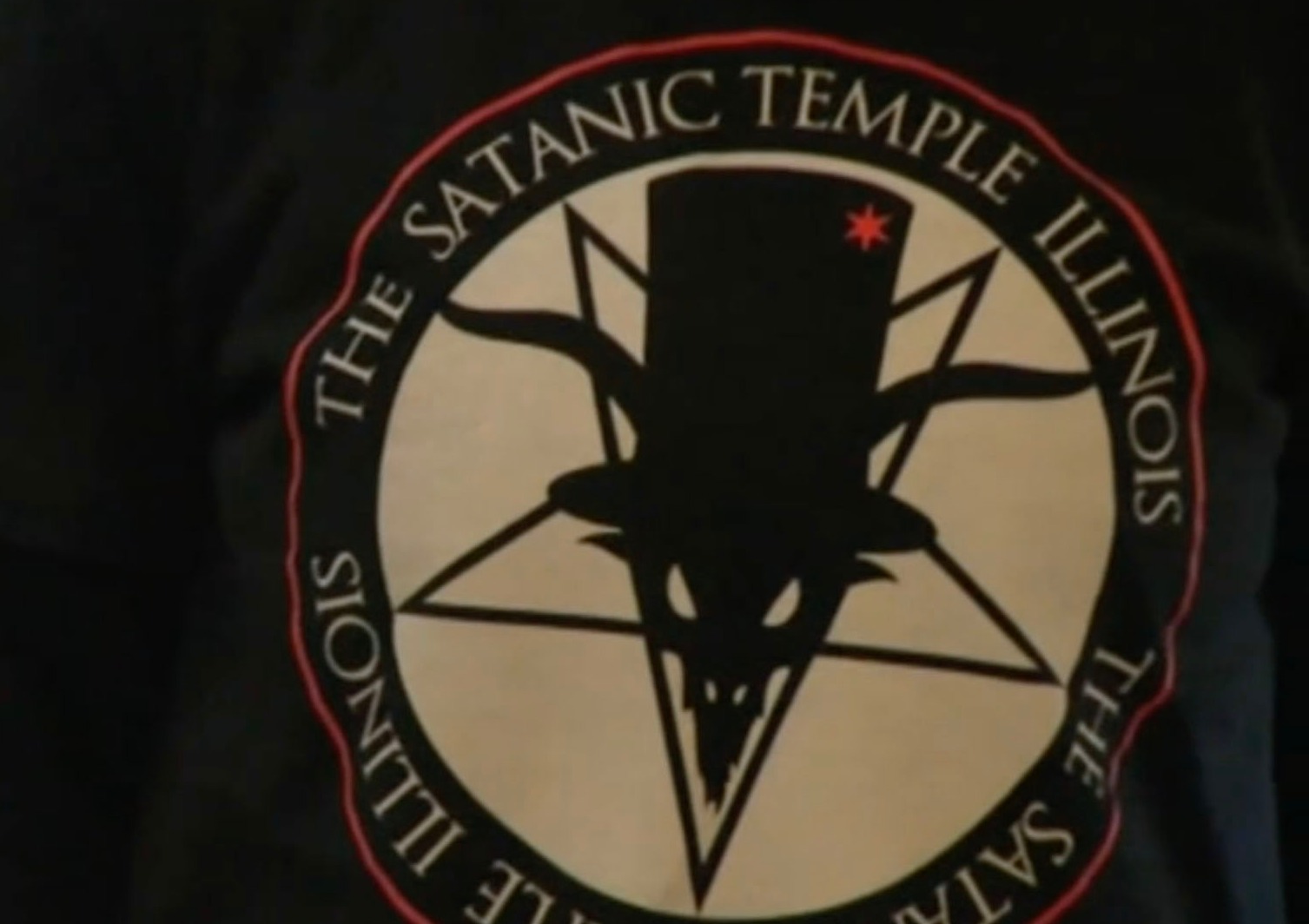 December 2021 marks the third year the Satanic Temple was allowed to set up a display in the building, WICS Springfield reports.

Members of the Satanic Temple said the setup displays "positive values" and stands for unity, empathy, compassion, and plurality.

The deity Baphomet — designed by artist Chris Andres and placed near the Nativity scene, Christmas tree, and the menorah — was slammed by local Bishop Thomas John Paprocki who insisted the figure should have "no place in this Capitol or any other place," according to Religion News Service (RNS).

Darren Bailey, a Republican candidate for Illinois governor, also wasn't supportive of the Satanic scene, which was installed on Monday.

On the day the display was put up, Bailey wrote to Facebook: "We have all been appalled by some of Springfield's extreme and evil legislation, but just when we thought it couldn't get worse, today at 1 PM, they are going to allow a satanic display in YOUR rotunda at the Capitol.

"Their evil, satanic display of the 'Baby Baphomet' meant to mock the millions of Christians in Illinois is vile and has no place in our State Capitol."

Kate Garraway's heartbreaking update on Derek Draper ahead of Christmas

Boris will NOT announce any lockdown restrictions before Christmas

Paedophile jailed for having cocaine-fuelled sex with an Alsatian

Bailey dubbed the set up an "evil mockery of faith" and demanded it not be allowed at the statehouse.

When the Baphomet was installed, 40 protesters were estimated to be in attendance, Minister Adam of the Satanic Temple Illinois told RNS.

Adam, who recalled the state being "easy" to work with, said the demonstration against the Baphomet was unexpected and "divisive."

Some were seen holding signs reading: "Begone Satan! Mary Crushes the Serpent!" and "Satan has no rights!"

And footage shared online showed Satanic Temple members shouting "Hail, Satan!" when Adam spoke about the meaning of the display.

According to the State Journal-Register, Diocese of Springfield in Illinois's spokesperson Andrew Hansen said the display is at fault for "mocking millions of Christians in the state of Illinois and billions around the world by depicting the baby Jesus this Christmas with the ‘satanic deity' Baphomet."

He dubbed the setup as the "definition of evil."

Despite the backlash against the holiday setup, inside the Illinois State Capitol's rotunda is a sign from the State of Illinois.

The sign, placed alongside all the festive displays, reads: "The State of Illinois is required by the First Amendment of the United States Constitution to allow temporary, public display in the state capitol so long as these displays are not paid for by taxpayer dollars.

"Because the first floor of the Capitol rotunda is a public place, state officials cannot legally censor the content of speech or displays.

"The United States Supreme Court has held that public officials may legally impose reasonable time, place and manner restrictions regarding displays and speech, but no regulation can be based on the content of the speech." 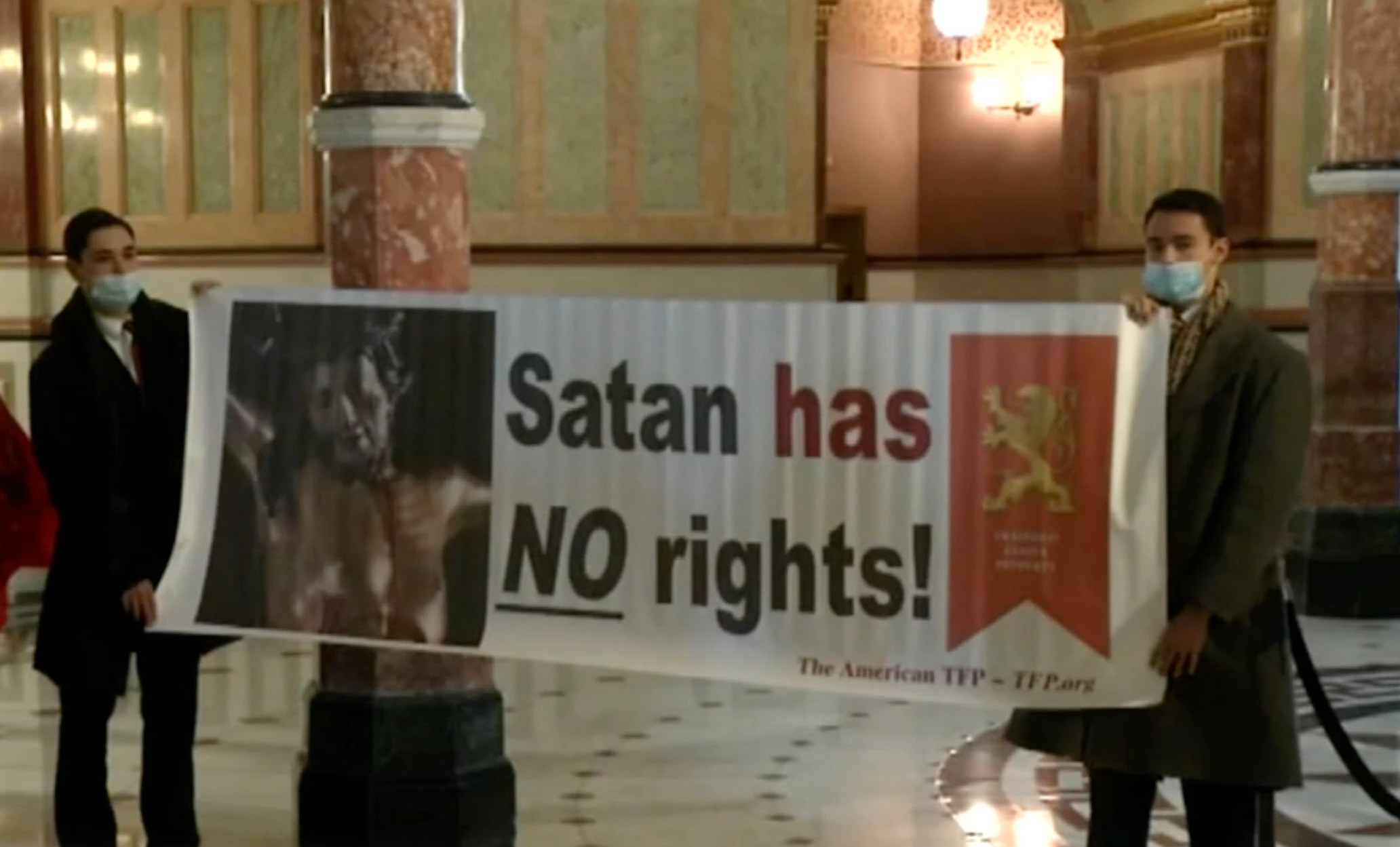 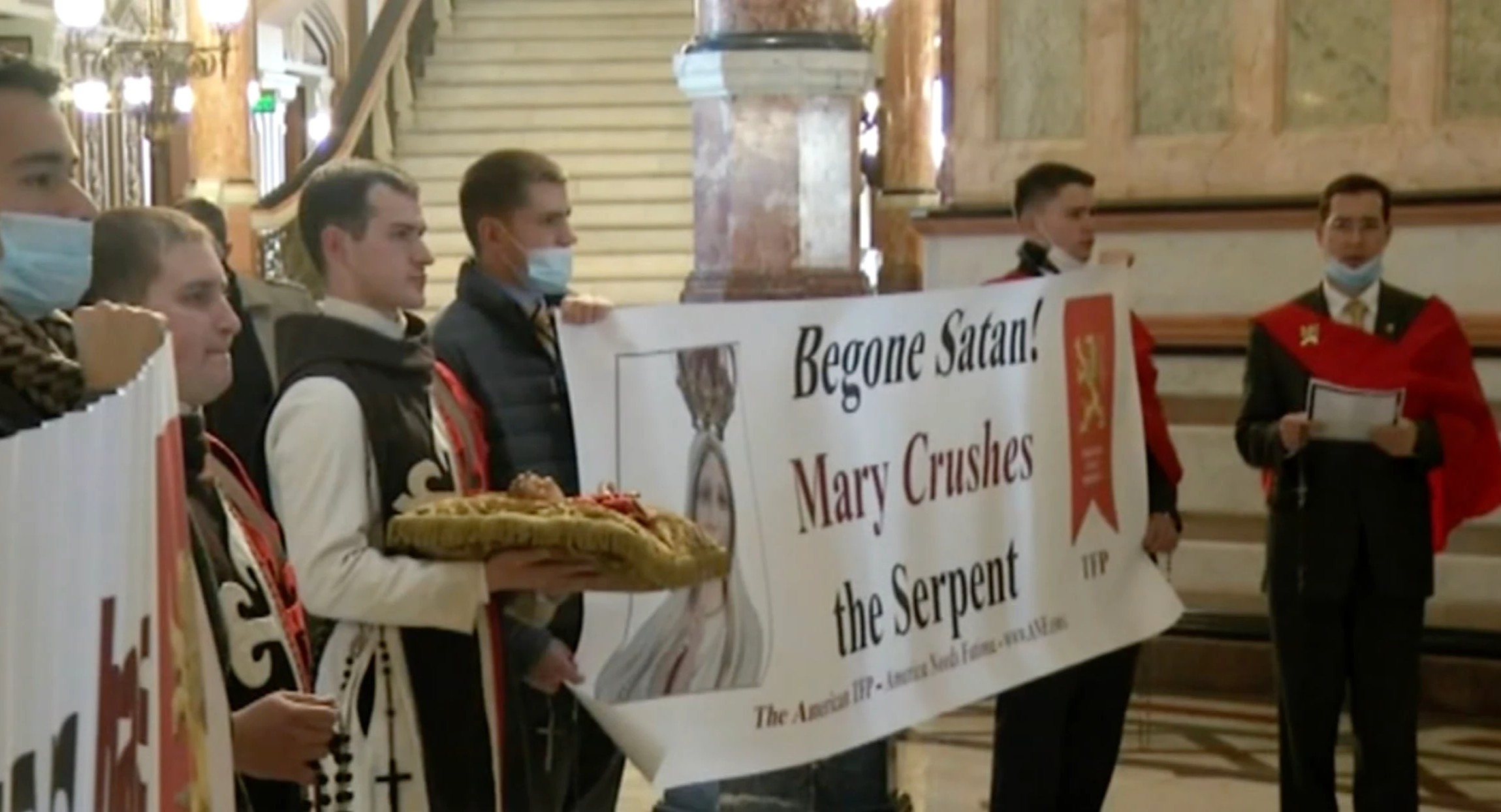 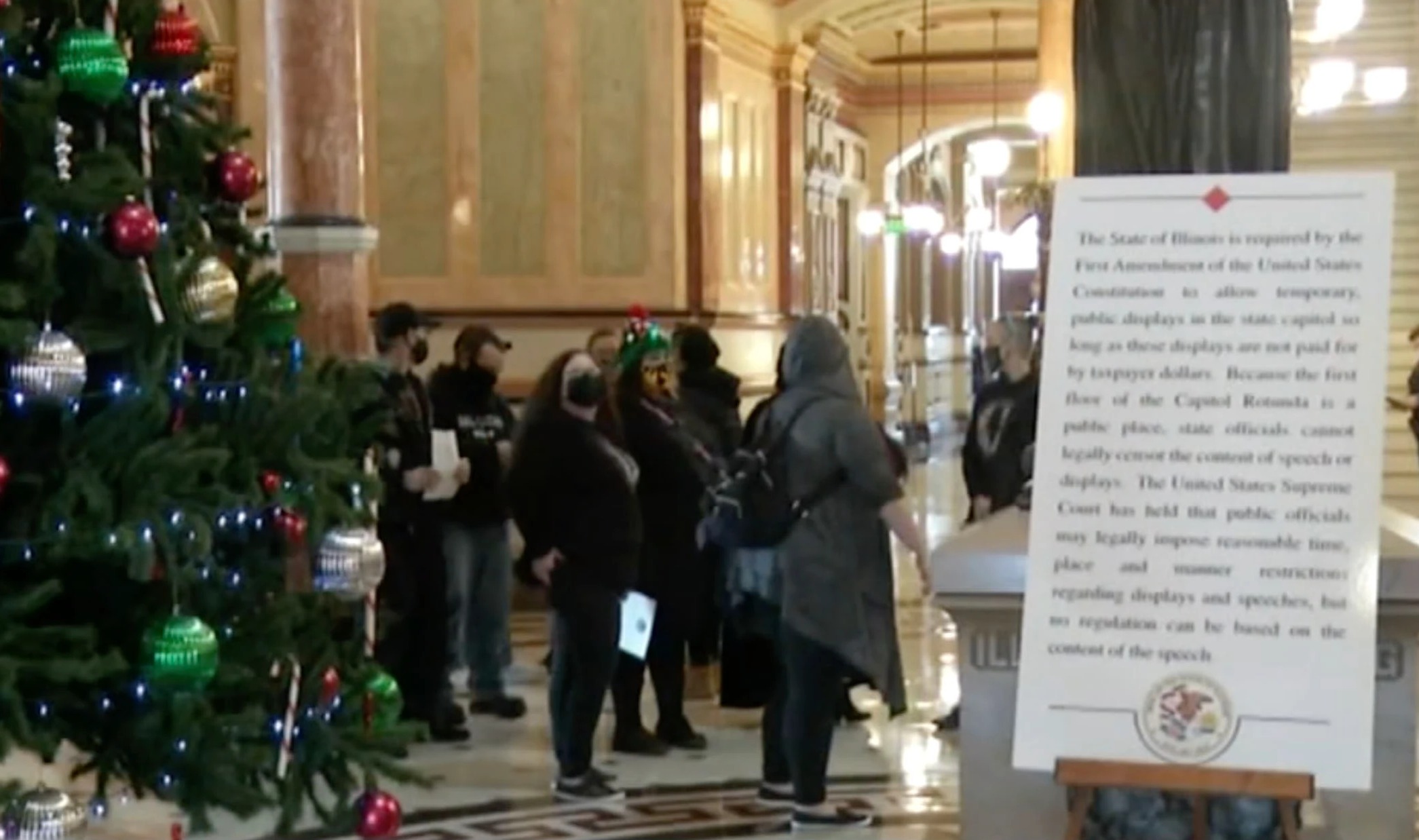 23/12/2021 World News Comments Off on Outrage as Satanic Temple displays demonic baby next to nativity scene at statehouse and shouts 'Hail Satan!'
Markets