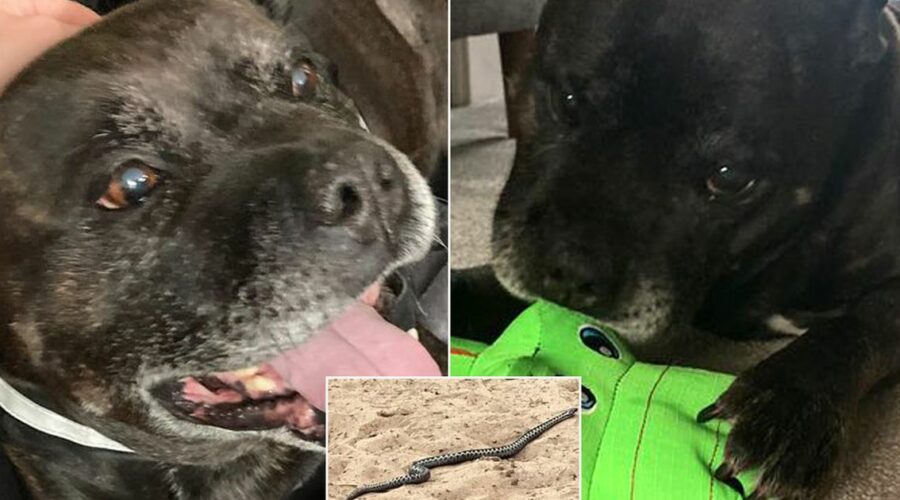 Sign up to TeamDogs for the best dog news, pictures and stories.

Desperate pet owners were left with a £3,500 bill after their beloved pooch was bitten on the nose by a poisonous snake.

Sam, a Staffordshire Bull Terrier, was bitten by an adder while on a walk in the Gower region of South Wales and spent three days fighting for his life.

He thankfully went on to recover but with a £3,500 bill, owner Charlotte wanted to warn other dog-owners amid a growing number of similar incidents.

To avoid a similar eye-watering bill, Charlotte, who didn't want to give her full name, urged pet owners to get pet insurance if they're able, reports Mirror.

She and Sam the Staffie had been out walking in the Llangennith area of the Gower, an area they often explore together.

Both of them spotted an adder curled up on the path.

Terrified of snakes, Charlotte screamed but Sam approached to have a look and that's when he was bitten.

The adders are most active between April and July, which is also the time when the majority of bites have been reported historically.

Adults are described as being roughly 50 to 60cm long and have a black and brown zigzag pattern along their back and 'V' or 'X'- shaped markings on the back of the head.

"I am absolutely terrified of snakes so I am always on the lookout for them," said Charlotte.

"I just started screaming when I saw it curled up on the path. Sam came to have a look at what was going on and it bit him on the nose before we could get him away." Charlotte rushed Sam to the vets, where he was given antihistamine and kept in to be monitored.

Eight hours after he was bitten, the vets started to become concerned because the bump on his nose had grown and there was swelling to his head and neck that was starting to affect his breathing.

"They decided it was time to give him anti-venom but the side effects they warn you about with that are terrifying," said Charlotte. They even warned it could cause death. It is the same treatment they give to humans because there is not a specific one for dogs and it can cause them lots of problems.

"Each dog is different and reacts differently. By this point the swelling was so bad he couldn't eat or drink and he sounded like a dinosaur when breathing and we were told to brace ourselves."

It costs £819 per 5ml vial of antivenom and Sam needed two before he started to get over the worst of his symptoms. But Charlotte said he is "worth every penny".

The total 3,500 bill was covered by her insurance but had to be paid up front before it could be claimed back.

And she believes the snake attacks are on the rise.

She said: "Whether it’s warmer weather or the fact there’s been less people around the last few years because of restrictions it’s definitely a cause for concern and I'd like to ensure more people are aware of the seriousness of adder bites and to make sure they keep a close eye on their dogs."

If your dog is bitten by an adder experts say you should:

The PDSA says adder bites are especially common between June and August and it is most common for a dog to be bitten on the face, neck, or lower leg.

Adders are normally small grey/brown snakes with a distinctive V-shaped marking on their head and dark zigzag pattern down their back. They are most common in long grass, woodland, moorland, and by the coast in sand dunes and along coastal paths.