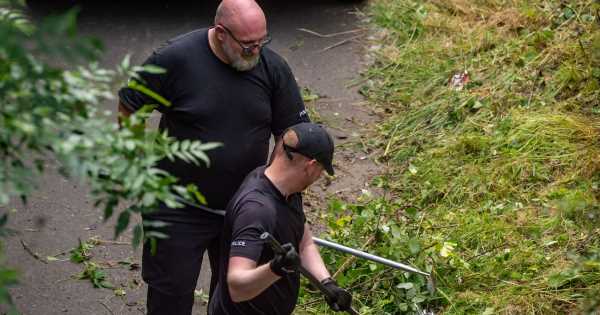 Specialist police officers are conducting a search of woodland near Wiltshire, Swindon after the discovery of what could be human remains.

A large police presence has been seen in Meadow Way, Badbury Wick, where officers and forensic experts appeared to be combing the ground under a bridge near Junction 15 of the M4.

A spokesperson for the force said: “Specialist officers are currently conducting a meticulous search of the area to recover any relevant material before forensic scientific analysis is conducted.

“This sort of investigation can take a number of weeks however we will endeavour to provide updates where we can as this work continues.

“Members of the public will see a police presence in the area over the next few days and weeks.”

The force thanked members of the public for their "patience".

Police cars and a fire engine have been seen at the scene, along with a police dog unit.

The specialist officers have been seen marking up an area of ground and taking items for further examination. Clear plastic bags and red marker flags are being used.

Earlier this year, human skeletons including those of two children were dug up by builders working in the garden of a home in Heytesbury, Wiltshire.

Robbie Kearney, 32, made the gruesome discovery while digging a hole for patio drainage.

Speaking to the Sun, he said: ""I found a few bones, which I assumed were animal bones, and went down a bit further and found some more bones.

"Then I went a bit deeper and found a skull. That's when I realised they were human remains.

"It came as a bit of a shock as I've never found a skull before."