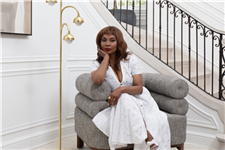 We’ve often heard from founders that running a business can be a 24-hour experience. Still, recently, many of us are denouncing hustle culture for a balance of our own. As women who wear multiple hats, how we spend each moment of the day matters.

For Black women, time is precious, but often we forget that the time we spend outside of building our empires is just as important. In this ESSENCE.com series, we’ll get the scoop on how some of your favorite entrepreneurs and executives are spending time off the clock to refuel, recenter and remember their north stars.

For Brigette Romanek, it was a natural and seamless progression to leave the fashion industry as a bag designer and make her mark on the interior design world. “Basically, I had worked on my own house, just doing it out of love for design and creativity,” she shared. Her friends who visited her home loved her great eye and asked her to bring her talents into their homes. Word of mouth grew, and so did her client list, which includes Beyoncé, Gwyneth Paltrow, Demi Moore and Joe Jonas, to name a few. After taking on a few clients, she decided to open Romanek Design Studio in 2018 and lead a team of 12 employees.

The company works on residential, retail and commercial projects in interior design, interior architecture and planning. The work has landed Romanek on Architectural Digest’s top 100 designer list four times since 2019. The wife and mother of two daughters have expanded her design work with furniture designing. Romanek recently launched her second vintage-inspired collaboration with American-based furniture and lifestyle brand Mitchell Gold + Bob Williams, including lighting, sofas and chairs. Romanek admits that turning off her interior designer vision can be challenging when entering any space, but family and friends help her find time for herself. Learn more about how this sought-after Hollywood designer lives life off the clock.

She doesn’t force a “me time” routine.

She lets the day flow to enjoy her personal time. “I’m an early riser, so it’s great to get up in the morning and have that quiet time,” she said. She reads, sits in silence, walks, answers emails, or thinks during that time. “It really depends on what I’m up for, but whatever that is, that’s what I allow to happen. Nothing is forced because that is what I’m feeling would make my day better to start,” she explained. She leans on that feeling of how she wants her day to start and puts her efforts into whatever will make that happen. “Whatever it is, it’s all about me, and that’s the goal of that time,” she said.

Her daughters help her escape work.

Romanek enjoys dropping her daughters off at school. “My kids don’t care about my work, which is great because kids are so present, and they force me to be,” she said. Those drop-offs to school or walks around the neighborhood on the weekends allow for conversation and check-ins. The trio walks to shops in their neighborhood or often stops by other families’ houses while on their walks. It will enable Romanek to turn off because her work inspires her, and she constantly thinks about it.

Treats herself to a little self-care.

“Periodically, have someone come in to give me a great massage, which is wonderful,” she said. Not only does she get home massages, but every three to four months, Romanek treats herself to a spa day. She takes a yoga class on Sunday mornings to get her week started. “There are ways that I try to incorporate things that I know are really important for my health,” she explained.

Girlfriend time is a priority.

“Having good girlfriends is really quite incredible because that becomes going out and laughing and venting and exhaling and all of that good stuff,” she shared. Like most of us, Romanek is active in her group chat with her closest girlfriends. She values the humorous texts and recommendations that her friends provide throughout the day. In those group chats, they also plan their next meet-up. From gathering at someone’s house or trying out a new restaurant, the group of seven to eight women is diligent about meeting up once a month. “We make sure it happens. We really make sure and stick with it because it’s beneficial, it’s therapeutic and it’s necessary,” Romanek said.

Why is being off the clock important?

Romanek spends most days looking through design books for inspiration on aesthetics, shopping for clients, measuring spaces and furniture and working with her team. The amount of projects her company takes on varies at different times. Sometimes they have as many as 17, and other times it’s just seven depending on the size of the projects. She is passionate about what she does but understands the power of turning it off.

She compared it to being a circus act and knowing that you can’t spin on a ball indefinitely because you eventually will fall. Romanek believes it is vital to be present and take time to pause the work we do. “I’m a better human being for the exchanges that I have with people, and then also the exchanges I have with myself,” she said.