As Melburnians prepare for a drab New Year's Eve devoid of fireworks, with limits on numbers gathering in homes and police patrolling the streets in search of social distancing infractions, spare a thought for the residents of Sydney.

While Victoria cancelled its annual fireworks display months ago, Sydney has always promised to push ahead with its famous harbour-front display. But on Monday, Premier Gladys Berejiklian made sure the first moments of 2021 will be like so much of 2020: performed without an audience.

In the wake of the northern beaches outbreak, which rumbled along with five new infections on Tuesday, the Premier shut down all public access to the Sydney Harbour foreshore. Like people from Melbourne, Sydneysiders will have no choice but to settle in front of the TV for its fireworks fix on Thursday night. 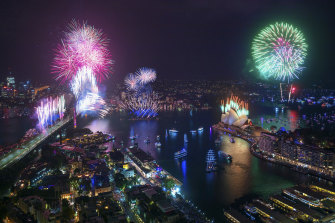 Melbourne will not host fireworks on New Year’s Eve, leaving Sydney as the main attraction in the sky. Last year’s Sydney display is pictured.

"On New Year’s Eve, we don’t want any crowds on the foreshores around Sydney whatsoever," Ms Berejiklian announced.

Prime viewing positions on the harbour had previously been allocated to frontline workers across NSW, who will now need to join Melburnians on the couch to watch the compressed seven-minute midnight display.

And the couch may be getting more use than usual in Melbourne – underwhelming weather is forecast for New Year's Eve, peaking at 21 degrees with cloud cover. 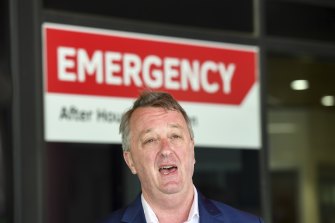 That means a maximum of 50 people on a dance floor and 30 at home gatherings.

He followed Ms Berejiklian's drear message with the words no Victorian partygoer wants to hear: "If you are going out, make sure you follow the COVID-safe rules".

Four of Monday's cases in NSW were linked to the northern beaches cluster and a fifth remained under investigation. 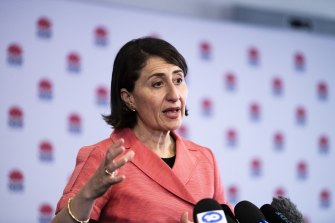 NSW authorities were still investigating the source of the cluster and while the number of tests dropped to 15,300 for Monday's results compared with a peak of 60,000 last week, federal Health Minister Greg Hunt praised NSW's management of the outbreak as extraordinary.

Mr Foley was more circumspect in Victoria, warning NSW was "not out of the woods yet".

He confirmed Victoria would keep its border shut to travellers from Greater Sydney and the Central Coast for at least another week, dispelling any hopes of last-minute trips between Victoria and Sydney.

"Well, it's certainly not going to be this week and we'll continue to take the advice of public health officials as to when that will be the case," he said. 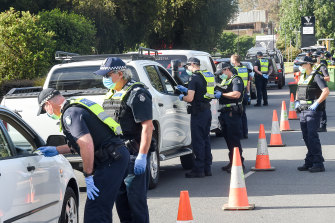 Police checkpoints on the Victoria-NSW border will remain for at least another week, Health Minister Martin Foley confirmed.Credit:Justin McManus

"There is no chance of the borders reopening for New Year's Eve … we want to make sure those borders, particularly to the red zones of Sydney and the Central Coast, stay shut down."

Mr Foley said the borders were a "day by day, week by week proposition" and Victoria was regularly liaising with NSW Health and the Australian Health Protection Principal Committee. Travellers from regional NSW who have not visited the red zones are free to cross into Victoria.

"There are 100 cases now associated with the northern beaches outbreak, and there are multiple daily additions to exposure venues right across Sydney," he said.

On the ultimate solution to any border closures, Mr Hunt suggested on Monday that Australia was ahead of schedule with its domestic production and importation plans for the Oxford-AstraZeneca coronavirus vaccine though the rollout is still planned for March.

He said the aim was for all Australians to be fully vaccinated by October.

"We're ahead of schedule and our approach is to under-promise and over-deliver," the federal Health Minister said.

Australia has recently settled its contract with Pfizer, whose vaccine is already in use in the UK and the US, and expects to have a final assessment of the AstraZeneca vaccine by the Therapeutic Goods Administration in late January or early February.