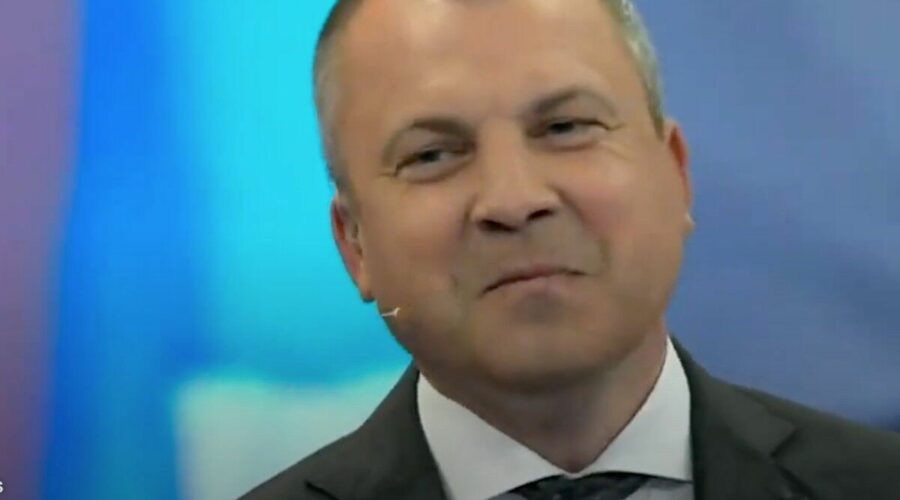 A TV host on a Russian channel and a journalist have appeared to belittle the suffering of Ukrainian kids in the midst of the Kremlin’s invasion. The station Russia1 saw a panel discussion of the ongoing war, in which the pair took aim at the plight of civilians in Ukraine “getting shells and bombs.” The host of the programme Evgeny Popov seemed unmoved by the position children have been left in as a result of Russia’s invasion but in a chilling exchange opted to make a joke about them still being able to eat at McDonald’s.

Russian journalist Andrei Sidorchik told the state-owned channel: “American children have nothing to eat and Ukrainian children are which are supposed to somehow secure their future, which is most interesting.

“They’ll have no fathers, no homes, a burned-out country.

“They’ll have nothing that American children have.

“That’s what the Western countries bring to Ukrainian people.”

“But they’ll have McDonald’s!” mocked the presenter, Popov.

“Yes, but it will be burnt, due to what’s going on,” replied Mr Sidorchik.

It comes as Russian forces on Wednesday pounded the easternmost Ukrainian-held city in the Donbas region that is now the focus of the three-month war, threatening to shut off the last main escape route for civilians trapped in the path of their advance.

After failing to seize Ukraine’s capital Kyiv or its second city Kharkiv, Russia is trying to take full control of the Donbas, comprised of two eastern provinces Moscow claims on behalf of separatists.

Russia has poured thousands of troops into the region, attacking from three sides in an attempt to encircle Ukrainian forces holding out in the city of Sievierodonetsk and its twin Lysychansk.

Their fall would leave the whole of Luhansk region under Russian control, a key Kremlin war aim.

“All the remaining strength of the Russian army is now concentrated on this region,” President Volodymyr Zelensky said in a late night address.

His office said the Russians had launched their assault on Sievierodonetsk early on Wednesday and the town was under constant mortar fire.

Luhansk regional governor Serhiy Gaidai said six civilians had been killed and at least eight wounded, most near bomb shelters, in Sievierodonetsk.

The main road out was still being shelled, he said, but humanitarian aid was still getting in.

Ukraine’s military said fighting for the road was ongoing, and that on Tuesday it had repelled nine Russian attacks in the Donbas.

It reported at least 14 civilians killed in strikes by aircraft, artillery, tanks, mortars and missiles.