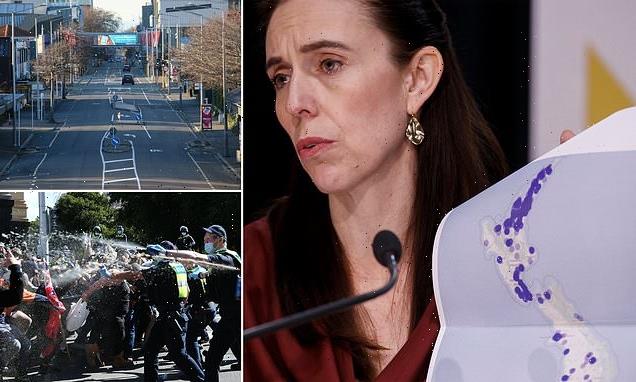 Director General of Health Ashley Bloomfield reported 41 new COVID-19 cases on Tuesday, taking the total infections in the country to 148, and warned the outbreak of the highly infectious Delta variant would be like dealing with a whole new virus.

‘Delta is unlike our previous experience. It is, as we know, highly infectious and transmissible and, as we have seen, spreads rapidly,’ he said.

The South Pacific nation’s virus-free run since February ended last week after an outbreak of the Delta variant erupted in Auckland, New Zealand’s largest city, and quickly spread to the capital Wellington.

So far, eight people associated with the current outbreak are in hospital.

On Monday Ardern’s decision to extend the lockdown was criticised by her opposition as ‘unfathomable’. 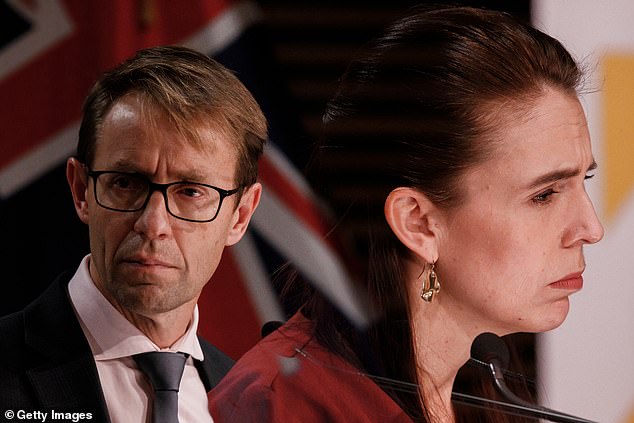 Director General of Health Ashley Bloomfield (left) reported 41 new COVID-19 cases on Tuesday, taking the total infections in the country to 148. On Monday, Jacinda Ardern (right) extended New Zealand’s harsh level 4 lockdown until at least Friday, and until the end of the month in Auckland

The health ministry said a cluster of at least 58 people of Samoan ethnicity linked to the Samoan Assembly Of God Church in Auckland were among the infected, and that the community had received racist messages via social media.

‘The virus is the problem, not people,’ the ministry said on Twitter.

Jacinda Ardern has garnered global praise for stamping out COVID-19 in the country, but her reliance on strict border controls and snap lockdowns has been called into question amid the latest outbreak, which has occurred while only 20% of the population has been vaccinated.

Opposition leader Judith Collins on Monday said: ‘At a time when New Zealanders have the harshest lockdown in the world and have lost our freedoms because of the government’s failure to vaccinate and secure the border, [the lockdown extension] by Jacinda Ardern is unfathomable.’

‘Any state and territory that thinks that somehow they can protect themselves from COVID with the Delta strain forever, that’s just absurd,’ he told the 9News breakfast show on Tuesday.

‘I mean, New Zealand can’t do that. They were following an elimination strategy. They’re in lockdown. The way through is to get to those 70% and 80% (vaccination) marks and open safely.’

Morrison declared on Monday that Australian states must open their borders once vaccination rates reach 80% of the population aged 16 years and older.

But in Western Australia, where there are no community infections, premier Mark McGowan said his government would not reopen at the 80% vaccination level if it meant reintroducing the virus.

About 24% of Australians are fully vaccinated.

Prime Minister Morrison’s remarks came following an outbreak in Sydney over the weekend as cases grew by more than 800, near record levels.

Health authorities said an outbreak centred in Melbourne also grew by 71 cases and another in the capital, Canberra, grew by 16 cases.

All three cities remain in lockdown despite widespread protests which have left a number of police officers injured in violent clashes with protestors. 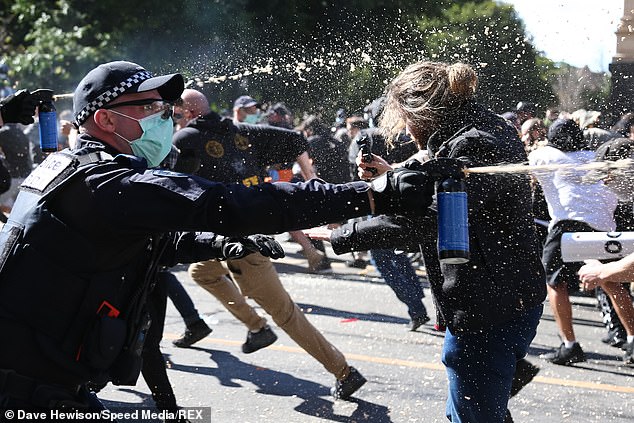 Violence erupted when police attempted to control protesters with pepper spray during the Freedom protest on August 21, 2021 in Melbourne, Australia

Police used tear gas, pepper spray and rubber bullets on demonstrators in Melbourne and arrested more than 200 people after an anti-lockdown rally on Saturday descended into a riot.

More than 4,000 people turned up to the ‘freedom rally’ in the Australian city on Saturday morning, and by late afternoon six officers has been hospitalised – including two with suspected broken noses, one with a broken thumb and the others with concussions – and 218 protesters arrested.

Police issued 236 fines for breaching coronavirus restrictions, and have three people in custody for assaulting police.