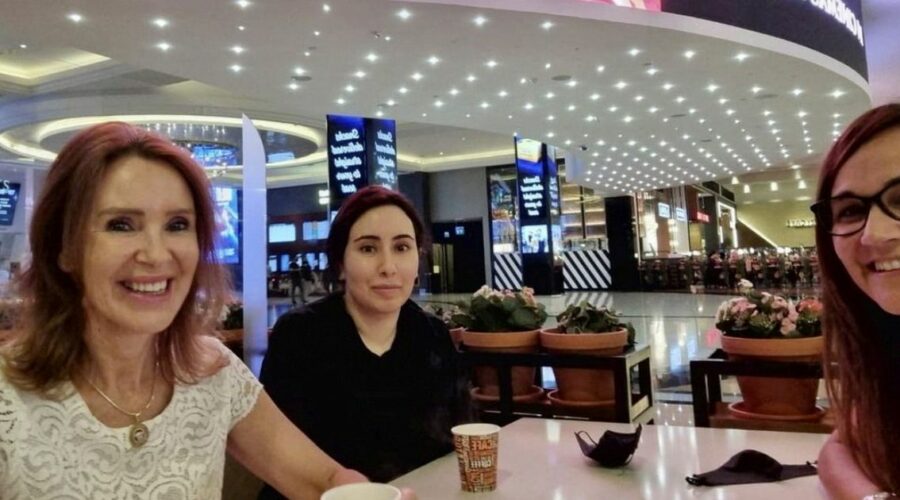 New fears for Princess Latifa have emerged after the Dubai royal is said to look "blank" while sitting next to a psychic in her latest photo.

The 35-year-old has allegedly been held captive by her father since being captured trying to flee across the Arabian Sea in 2018.

Three photos of her have been recently released on Instagram suggesting she is alive and well.

The third snap appears to show her in a Dubai shopping mall with friends Fiona Day – a clairvoyant – and Sioned Taylor.

But Latifa's expression has raised fears that the images are a PR stunt and that she is still under house arrest by her father Sheikh Mohammed bin Rashid Al Maktoum, Prime Minster and vice-president of the United Arab Emirates (UAE).

The Guardian described her looking "blankly" at the camera.

Pals released secretly ­recorded video messages earlier this year showing Princess Latifa claiming she had been held against her will since 2018.

The footage prompted the United Nations (UN) to call for concrete proof of her wellbeing on April 20.

The UK government is now being urged to intervene to find out whether the Emirati royal has been genuinely freed from captivity.

Former Foreign Office minister Peter Hain told the Guardian: "British ministers must stop dragging their feet over Princess Latifa and demand proper proof of her life and her freedom.

"These photos are very far from that. Why is she not allowed to speak directly to journalists for instance?"

The sheikh has been pictured with the Queen owing to their shared interest in horse racing.

On Saturday, a picture was posted on Instagram showing the princess and a friend, Sioned Taylor, on the terrace of an Italian restaurant called Bice Mare, with Dubai's skyline in the background.

Earlier last week another picture was posted on the same account, apparently showing the princess sitting at the Mall of the Emirates in Dubai, along with Taylor and another woman.

Both photographs appeared on the account of Taylor, a Royal Navy veteran, teacher and former court employee.

The third picture showed her alongside a smiling companion called Fiona Day, who describes herself as a compassionate intuitive consultant and a psychic medium.