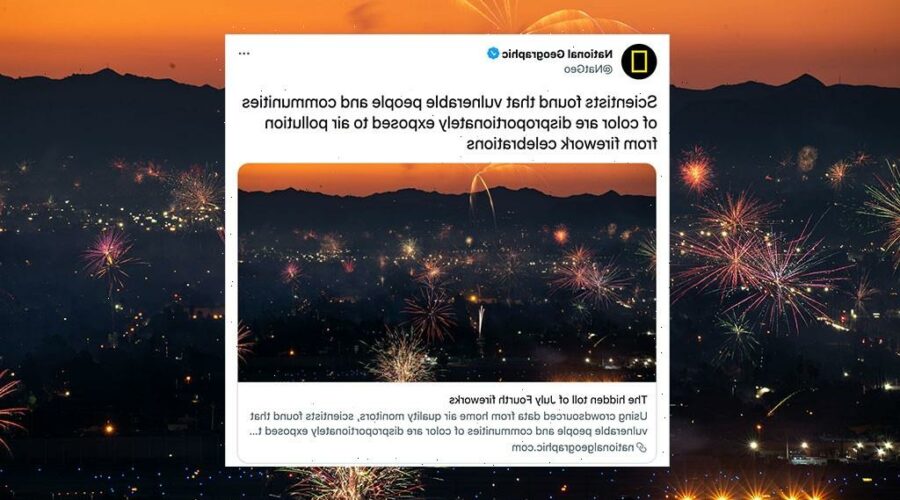 Rare half male, half female Cardinal spotted in PA

National Geographic has suggested that holiday fireworks are racist because the smoke pollution “disproportionately” hurts minorities — sparking a firestorm of criticism from readers.

The famed conservation institution tweeted out the assertion on the Fourth of July, based on a recent study assessing the impact of Independence Day fireworks on communities.

“Scientists found that vulnerable people and communities of color are disproportionately exposed to air pollution from firework celebrations,” the nonprofit wrote on Twitter above a photo of a lights display over North Hollywood, Calif.

The tweet included a link to an article the mag just published involving research using crowdsourcing data in California.

The state’s minority residents are at greater risk for health concerns related to fireworks smoke partly because the holiday displays usually take place in its urban areas and along the coast, where there are greater concentrations of such populations, experts told the publication.

The same residents are also typically already battling asthma and other health afflictions at a higher rate, so the smoke only adds to their woes, the researchers from the University of California, who conducted the study, said.

“The authors … showed that fireworks smoke may be creating an additional — albeit short-term — health risk for communities already disproportionately burdened by air pollution: Urban ones with higher rates of asthma, more older residents, and a greater percentage of children under 10. These areas also tended to have more Black and Hispanic residents than those with less Fourth of July air pollution,” the magazine article said.

An expert told National Geographic that she’d expect the findings would be the same across the country.

But many on social media were not having it, blasting the suggestion as absurd.

“Honestly, I am a scientist and this is beyond ridiculous,” one person wrote.

Another Twitter user said, “I’m a liberal guy but this stuff is getting ridiculous,”

A third person said, “It never ends with the ridiculous headlines about race. Give it a rest.”

The researchers used data from 751 commercial “home air-quality monitors” during June and July in 2019 and 2020 to draw their conclusions.

They also suggested that the state crackdown on illegal fireworks sales and move to drone light shows instead.