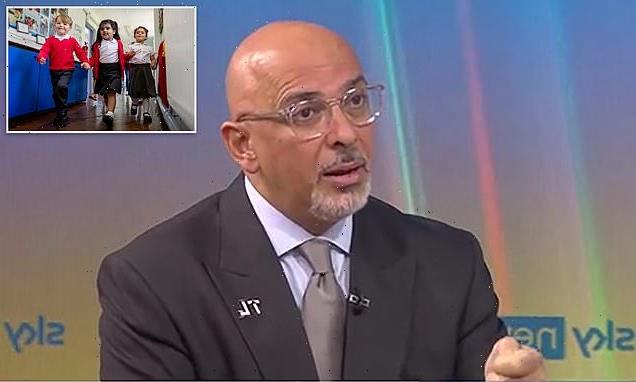 Nadhim Zahawi will dramatically shake up the education system today as he announces plans for 32.5-hour weeks for all primary and secondary school pupils.

The Cabinet minister is set to tell headteachers they must offer the time in class by September next year.

It comes as he unveils the Schools White Paper today as he sets out the government’s vision for education over the next decade.

It will see the Education Secretary outline proposals for councils to create their own academy trusts and take over failing schools.

Meanwhile he will offer pupils at risk of falling behind in English and maths tutoring sessions in small groups.

Mr Zahawi said he wants the changes ‘to work for every child wherever they are’ regardless of if their parents ‘have the wherewithal’. 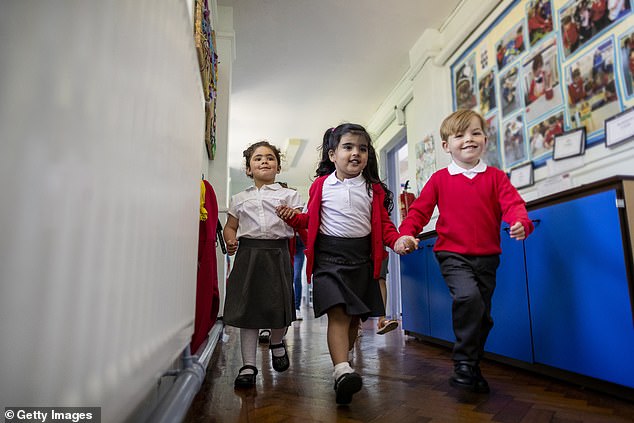 Children SHOULD learn about the benefits of Empire, Nadhim Zahawi says

Children should be taught about the benefits of the British Empire, Nadhim Zahawi has said.

The Education Secretary said youngsters should not just be shown the negatives of it.

He said: ‘Let me give you an example. You know that my parents fled Iraq because of Saddam Hussein.

‘If you ask Iraq before the Ba’athist regime came into office about cronies and criminals, Iraq was left a legacy of a British civil service system which actually served the country incredibly well for many, many decades, and that’s the sort of thing that, actually, children should be learning about.’

‘And of course all aspects of the empire, and I think that’s important.’

He told Sky News: ‘I hope we can complete the journey, which is what my White Paper does, of a family of schools.

‘All the evidence suggests that schools that work together in a family of schools that’s tightly managed, really well supported, strong – and I underline strong – high-performing multi-academy trust, deliver better outcomes for the children.

‘I’m very fond of talking about my background of being the 11-year-old who couldn’t speak a word of English but with parents who had the wherewithal to push me, and look where I am today.

‘I want the system to work for every child wherever they are, at the right place and the right time, even with those whose parents who don’t have the wherewithal, or who have no parents, that’s what the White Paper will do.

‘It’s a real ambitious target to make sure every school in our country is high-performing in that family of schools working together.’

Speaking at Monega Primary School in Newham, east London today, he added: ‘Each day, each week, each month that goes by with children not getting the education they they deserve… the more life chances are dashed… This is what keeps me awake at night.’

A key part of the paper is for academy trusts to take over running schools in England by 2030, giving them more autonomy over governance, resources and curriculum.

It comes as the switch to academies has slowed in recent years, with the white paper allowing local authorities to encourage schools to join a a multi-academy trust.

Meanwhile they could also get new powers to accept children who are without a place at an institution.

Under the Government’s pledge, schools will identify pupils at risk of falling behind and offer them a range of support, including tutoring sessions in small groups.

Parents will be told of their child’s progress. The white paper aims for the national average GCSE grade in English and maths to rise from 4.5 in 2019 to five by 2030.

GCSEs are now graded numerically instead of alphabetically, with nine being the top score and one the worst.

Mr Zahawi continued: ‘This represents well over 100,000 children achieving a higher grade, which will help the learning, knowledge and skills that every child needs to succeed in later life.’

Earlier this year the Government set a target for 90 per cent of primary school pupils to meet the expected standards in literacy and numeracy at age 11 by 2030.

But last night Geoff Barton, of the Association of School and College Leaders, said the plan for boosting pupils’ literacy and numeracy targets was ‘vague’.

He added the Parent Pledge seemed like a ‘policy gimmick’, as schools already had robust systems for tracking pupils’ progress.

Paul Whiteman, of the NAHT union, said: ‘The decision to focus on the length of the school day is a very strange one given that there is very little evidence to suggest that this will have any real impact on pupil outcomes.’

Meanwhile a new national register will be introduced to stop vulnerable pupils falling through the cracks and going missing from school rolls.

The Schools White Paper announced laws would be introduced to modernise how attendance is recorded. 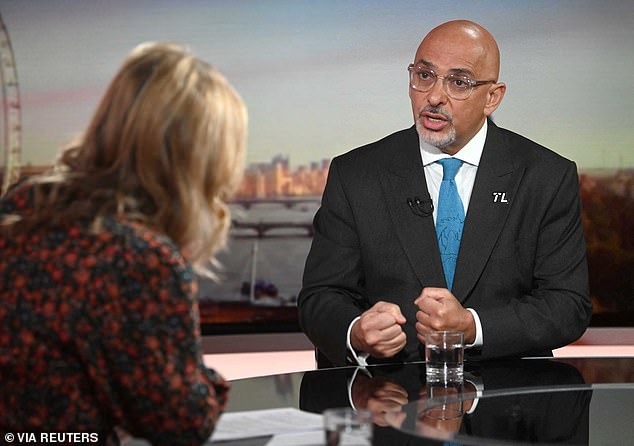 Nadhim Zahawi will unveil plans for a Parent Pledge that will guarantee extra support for children struggling with reading, writing and arithmetic today

A ‘national data solution’ will be used to track attendance and provide a ‘safety net’ for vulnerable pupils at risk of disappearing from school rolls.

A national register would be introduced to assess how many pupils were not in school across the country, he said.

On Monday, Mr Zahawi told the BBC the department’s national register of children in England would prevent students from going ‘missing from education’.

‘Some parents do brilliant work on home-schooling. I have them in my constituency, I’ve seen first-hand that work,’ he added.

‘But of course some children are missing from education. That can’t be right, which is why the national register is so important.’

Robert Halfon, chair of the Commons’ Education Select Committee, has frequently raised concern over the numbers of ‘ghost children’ following the pandemic – pupils who have fallen off school rolls during the past two years.

Some estimates suggest as many as 100,000 pupils are missing from school rolls.

The Paper said it expected schools and council attendance services to work closely together to help ‘severely absent’ pupils who miss 50 per cent of their schooling back into the classroom, and that new statutory expectations of attendance services would be introduced.

Parents will also be able to give their views of behaviour in their children’s school as part of a new national survey, the Paper said.

In the Schools White Paper, Mr Zahawi said behaviour and exclusions guidance for schools would be revised.

He said a new National Behaviour survey would be launched ‘to better understand what parents, children, teachers and leaders think of behaviour and wellbeing in their school’.

The White Paper added the forthcoming SEND Review, published on Tuesday, would set out reforms to ’tilt the focus of alternative provision towards early intervention’ so pupils would be supported in managing their behaviour and preventable exclusions could be avoided.

The Paper announced a ‘Parent Pledge’ for pupils falling behind in maths and English, with tutoring made available for any pupils struggling with literacy or numeracy.

It is hoped this will support the target of 90% of pupils leaving primary school attaining expected standards in English and maths.

‘This could take the form of a phonics catch-up programme run by a trained teaching assistant, or small group tuition after school in maths,’ the Paper says.

Parents will also be kept informed of their child’s progress through the scheme, and schools should monitor pupils’ learning through ‘robust’ testing.

The Paper set out plans for all schools to join or be planning to join a ‘strong’ multi-academy trust by 2030, while academy trust standards would be introduced to regulate the system.

It committed to 500,000 additional teacher training opportunities by the end of the parliament, and also aims for a new 32.5 hour week to be introduced as a minimum for schools by September 2023.

Every school would have the opportunity to access funded training for a senior mental health lead, it said.

Natalie Perera, chief executive of the Education Policy Institute (EPI) said: ‘The White Paper contains some bold aims, and a number of welcome measures, such as extra support for in-school mental health services and additional monitoring of children who are not in school.

‘But it seems unlikely that many of these bold pledges will in practice be met. Since the pandemic started, children have fallen behind in their learning, and the data published so far shows that there has been little catch up for secondary pupils and much bigger losses for the disadvantaged and those in the so-called levelling up areas of the North and Midlands.’

Sir Peter Lampl, chair of the charity Education Endowment Foundation – which the Paper committed to funding long-term – and Chair of the Sutton Trust, said: ‘Literacy and numeracy are the building blocks of a world class education, so the Government is right to make them the priority.

‘The pandemic has had a devastating impact on young people, and it is right that all – but especially those from low and moderate income backgrounds – are given the support they need to succeed.

‘We are very enthusiastic about the parent pledge but we must recognise that it is a tall order.

‘As we’ve seen from a number of research studies we have carried out, it is extremely difficult for young people to catch up once they have fallen behind.’

Bridget Phillipson, Labour’s shadow education secretary, said: ‘Is this really it? The Education Sec’s big idea is that schools should help pupils who fall behind.’

‘Of course they should. That’s what teachers already do. After twelve years in government, it couldn’t be clearer the Tories have run out of ideas.’

28/03/2022 World News Comments Off on Nadhim Zahawi announces plans for 32.5 hours of lessons a week
Markets