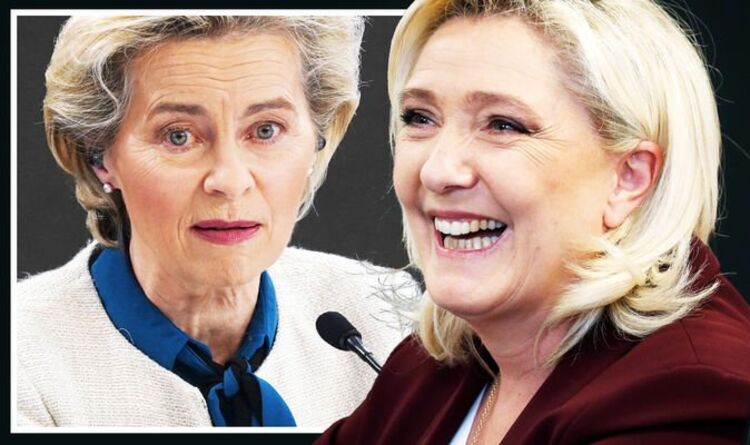 The National Rally leader achieved her best result yet in the first round of a French presidential election on Sunday, coming in less than five percentage points behind current President Emmanuel Macron. Mr Macron is still widely expected to win the second, most important round of the race, but is understood to be facing his greatest political threat to date.

Ms Le Pen has long been critical of the European Union, but, unlike some of her previous competitors, has stopped short of calling for France to leave the bloc (dubbed ‘Frexit’).

She has called for the recreation of the EU as an “alliance of nations” and claims like-minded political groups across Europe could “radically modify” the bloc.

This, however, is simply a cover for her wider plan to “destroy the EU from the inside”, according to Mujtaba Rahman.

The European Managing Director for the Eurasia Group insisted Ms Le Pen represented a much larger problem for the EU than Brexit ever did.

He wrote in a post on Twitter: “Le Pen’s EU policy is ‘we are going to stay in the bus but drive it off a cliff’.

“She is counting on ignorance of the French electorate to deliver a policy that would try to destroy the EU from inside.

“This is a much greater threat to the EU, liberal, democratic and Western status quo than Brexit.”

Former diplomat Arthur Snell agreed with the analysis, highlighting the more prominent position currently held by France within the bloc.

He added: “At least the Brexiters were very clear about wanting to ruin the EU from the outside (and proved unable to do so).

“Being the EU’s founder member and its second biggest economy makes France a much more serious threat.”

The EU appeared to come together in the wake of Russia’s invasion of Ukraine at the end of February, but earlier spits, including with Poland and Hungary, have already reemerged and continue to raise questions over the bloc’s leadership.

While Mr Macron has presented some more sceptical views of Brussels in recent months in order to gain electoral favour, his critics would argue he stands as one of the most pro-EU leaders among the remaining 27 member states.

In recent years, he has called for the creation of a “true, European army”.

He argued this would enable Europe to “defend itself better alone”, without any help from the US.

Renewing his mandate at home could further boost the President’s desire to increase EU control over its members to a higher level.

More recently, Mr Macron has also stressed the need for European “strategic autonomy” in almost all realms, including defence and technology.

On the tech front, the President has expressed his hope of regulating US groups within Europe and creating a “European meta verse” to compete with the likes of Facebook.

Polling suggested Mr Macron will hold on to his role later this month in the election’s second round, but some of his closest advisers admit they are concerned by his failure to win over working-class voters, who they believe may turn instead to Ms Le Pen.

French Interior Minister Gérald Darmanin recently told France 5: “[Le Pen] is dangerous for the President and she can win this election.”