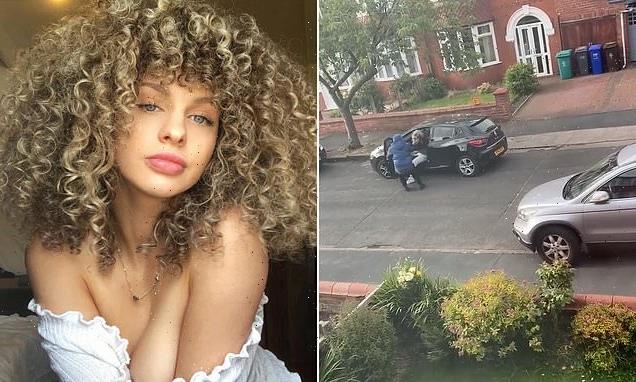 Mother, 21, reveals terrifying ordeal after hooded carjackers ‘held a knife to her throat and threatened to kill her two-year-old son’

A 21-year-old mum has spoken out after carjackers held a knife to her throat and threatened to kill her son as they stole her vehicle.

Courtney Slater, 21, was meeting someone she had and her boyfriend had agreed to sell a pair of sunglasses to over Snapchat when the ordeal happened in Gorton, Manchester.

She said she met the buyer in Cumber Road, where they talked to her boyfriend and were shown the sunglasses.

But, the car was then mobbed by a hooded knife wielding man who chased Slater’s boyfriend away and pulled her out of the vehicle, giving her seconds to rescue her toddler from the back seat before driving off around 7pm on Thursday. 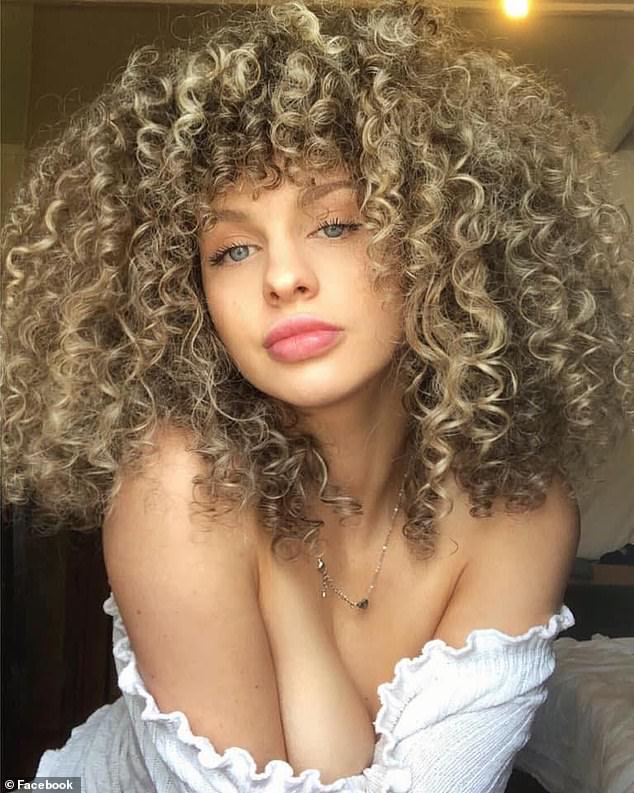 Courtney Slater, 21, has spoken out after she was dragged out of a car with a knife to her throat as her vehicle was stolen in broad daylight 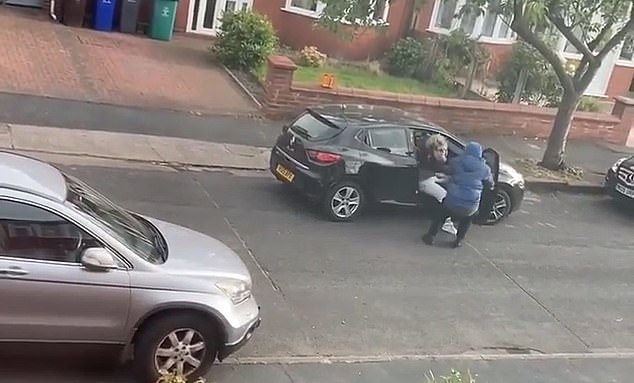 * Edit, thank you to everybody for your help, comments and shares, my daughter and my grandson are OK, they’re just…

She told Manchester Evening News: ‘People came by the side of the car out of nowhere and tried to stab my boyfriend.

They started chasing him with the knife and we didn’t realise one had stayed behind.’ The man then put the knife to her throat and ordered her out of the car.

Slater told MEN her first thought was for her toddler, who was in the back of the car.

She said: ‘He had the knife to my throat in front of my two-year-old in the back of my car.

‘I started screaming and crying. As long as my kid was safe, that’s all I was bothered about.

‘I thought, “Oh my God, Lekai is in the back. What if he gets in the car and takes Lekai? I’m going to have to get stabbed”.’ 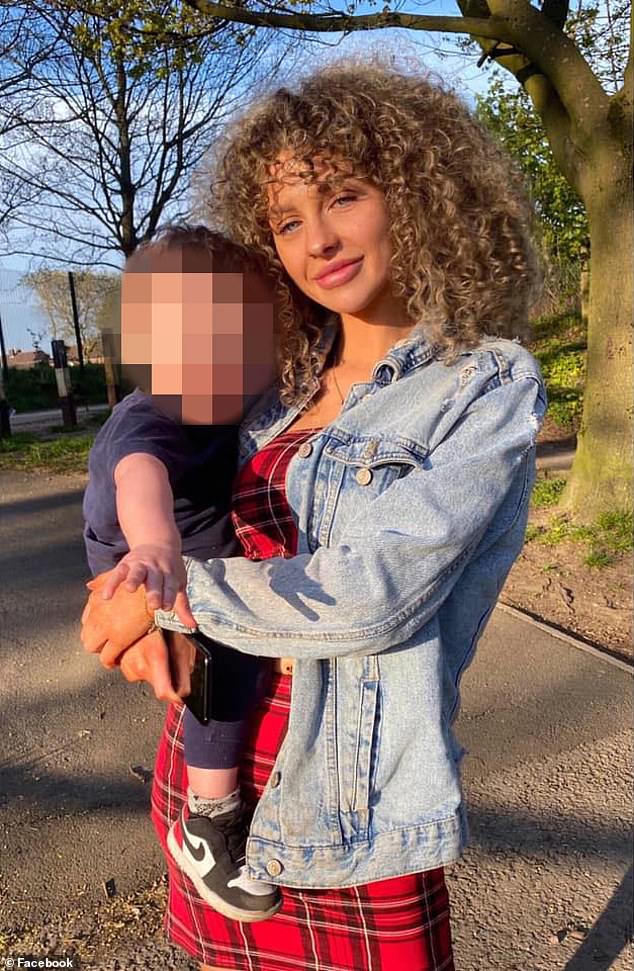 Slater said her first thought when the brazen thieves put a knife to her throat was for her toddler, who was in the back of the car 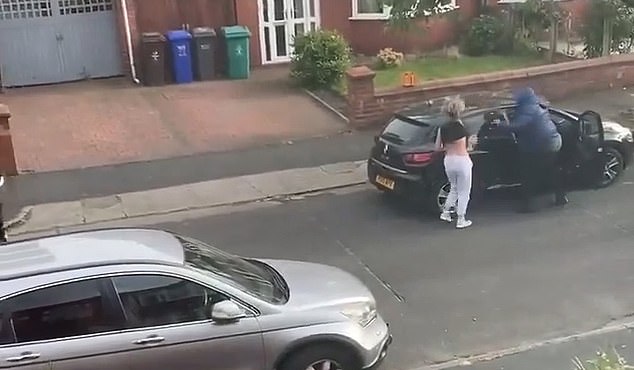 She tried to put the car into first gear and grabbed the steering wheel but the man managed to open the door and pulled her out of the vehicle, tearing her top.

Salter said he told her: ‘”Get the kid from the back,” and pushed me. I tried to run but my legs were jelly.’

She quickly made her way round the rear passenger door and grabbed her child as the thief and two more men climbed into the vehicle.

She barely had time to pull her baby out of the vehicle before the three men drove the car away from the scene at speed.

She said: ‘I tried to get my two-year-old out of the seat and he was caught in the seatbelt. They didn’t care; they just started driving.’

Slater and her young son were left stranded on the side of Cumber Road after the terrifying ordeal.

She and her mother later posted harrowing footage of the incident online in a bid to catch the thieves. 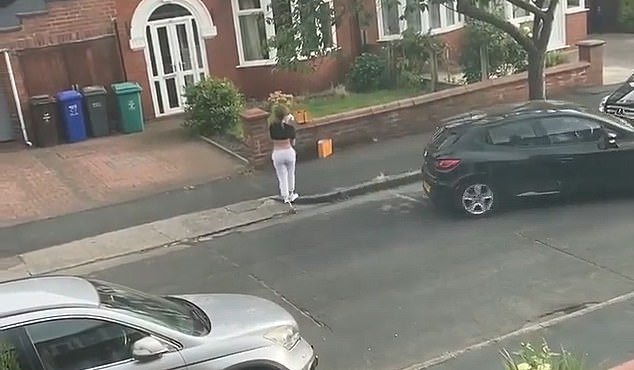 Slater and her two-year-old son were left stranded at the scene in Gorton, Manchester, on Thursday evening 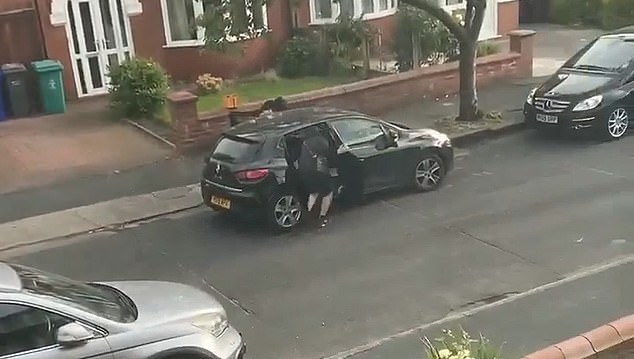 She wrote: ‘I really thought I was going to get stabbed as there was no way I was willingly leaving the car with my baby in there.’

She added she and her son were shaken by the incident – she no longer drives and fears the thieves may turn up at her house because there were letters in the vehicle which may show her address.

Slater added her son was affected by the attack and later said: ‘The man pulled mummy out of the car.’

The vehicle was later found a short distance away on Manby Road in Gorton and was returned to Slater, but it is believed that the thieves still have her phone.

Greater Manchester Police confirmed that they were called to the scene on 19:10 on Thursday.

They added that both mother and baby are safe and well.

One of the thieves was described as about 19 years old, black, and heavily built. Police said he was wearing a blue coat and a black balaclava at the time of the incident.

Another attacker was identified as being roughly 19, white, wearing grey shorts, and carrying a Gucci bag.

No arrests have been made. An investigation is ongoing.