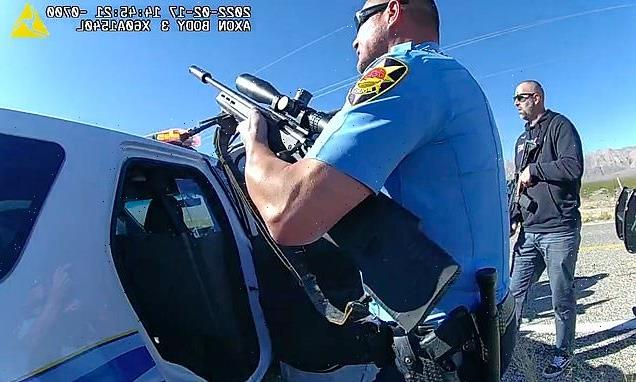 ‘We’ve only got one shot at this!’ Moment police sniper kills man holding gun and kidnapped baby in Arizona desert

Police have released body camera footage of a pursuit and standoff involving hostages that began in the tiny town of St. George. Utah and finished in the desert in the northwestern portion of Arizona near Beaver Dam.

The incident only ended after a police sniper shot the 30-year-old suspect, Oscar Alcantara, dead, while he was holding a baby that he had kidnapped.

The dramatic incident occurred in mid-February this year but the videos have only just been released following a public records request by television station KUTV.

Washington City police were already looking to capture Alcantara in connection with a separate incident in which a weapon was used. 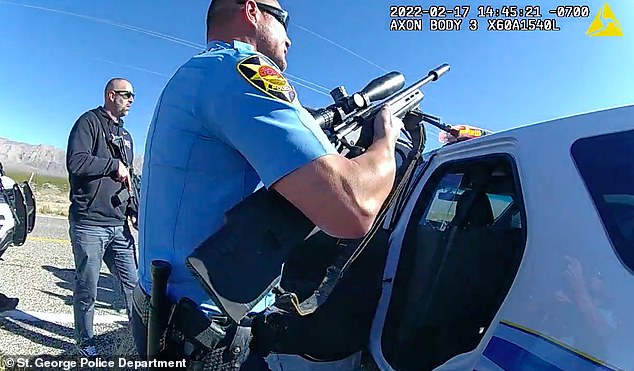 Alcantara was tracked down to a church in the Bloomington area of St. George.

When police pulled the car over, a woman ran to the officers, telling them Alcantara was still in the vehicle together with her child and that he had a gun.

Police were unable to apprehend Alcantara before he then jumped into the driver’s seat and sped off with the the woman’s child still strapped inside the car.

A police chase ensued with cops following the vehicle through St. George and out into the desert of southwestern Washington County before coming to a stop near the Beaver Dam across the Arizona border.

In video footage released this week, police can be seen clearing people away in the area where the chase ended.

Officers attempted to get Alcantara to give up the baby.

‘Put the child down on the ground, we will not pursue you!’ a police officer can be heard shouting at Alcantara.

Several minutes pass before Alcantara gets out of the car along with the child and runs off into brush off Highway 91, all the while pointing a weapon at the child.

‘Oscar stop! We don’t want to hurt you!’ an officer can be heard yelling.

As officers attempted to negotiate with Alcantara, police snipers got into position.

On audio on the video, officers can be heard stating that they can see a gun being pointed at them. 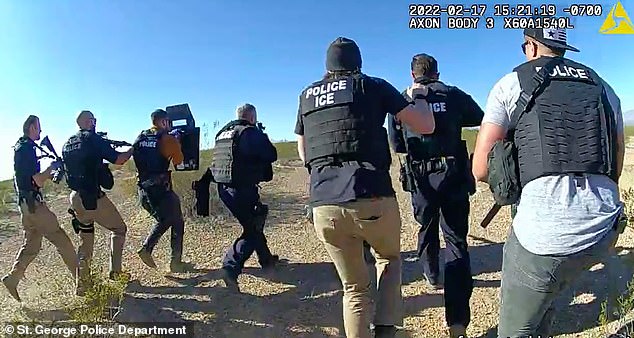 The incident happened on February 17 in the town of Beaver Dam, which is near the Utah / Arizona border and saw a massive police presence as the suspect was pursued

‘The gun is pointed right at us! Gun pointed at us!’, an officer can be heard shouting.

‘We’ve only got one shot at this!’ his colleague can be heard stating before firing off the riskiest of rounds, killing Alcantara while he was still holding the baby.

Officers ran over to Alcantara not knowing if the baby had been hurt.

‘I got child, I got child, come here baby,’ an officer with the St. George police department can be heard saying on body camera.

Incredibly, the infant was unharmed and quickly rushed to safety.

The Mohave County Attorney’s Office is currently reviewing the entire incident and plowing through hours of video together with the interrogation of both witnesses and the dozens of officers who were involved.