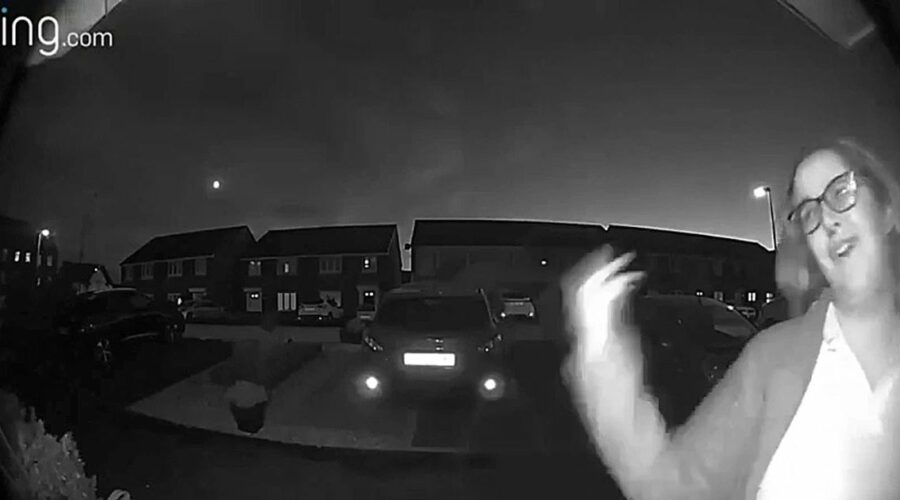 Harrowing doorbell cam footage shows the chilling moment a murder victim mum-of-two was verbally abused by a neighbour just days before she and her husband were brutally killed.

Jennifer Chapple, 33, and her husband Stephen, 36, were stabbed inside their home as their children slept after an alleged feud over parking in Norton Fitzwarren, Somerset.

The couple was pronounced dead at the scene on Sunday evening as two men aged 34 and 67 were arrested on suspicion of murder.

Following the incident, footage emerged from the couple's Ring doorbell camera that shows the argument Jennifer had with a neighbour just days before the attack.

The black and white footage revealed by the Sun, shows the garden centre coffee shop worker returning home just after 5pm and walking towards her front door.

As she reaches for the door handle when a man confronts her in the dark, accusing her of "f***ing gobbing off" and branding her a "cheeky little b***h".

Jennifer turns towards him and replies: "She's the one who started it, so f*** off."

The mum-of-two later sent the disturbing video to a friend showing the man unleashing a tirade of expletives before she goes into the house and he walks away, still swearing.

In a separate post on Facebook in February, Jennifer, described today as a “lovely, kind-hearted lady” said: “Don’t let the ugly in others kill the beauty in you.”

Avon and Somerset Police said the incident on the Dragon Rise estate would be referred to the policing watchdog due to “prior police contact with those involved”.

Tributes poured in for the couple after they were killed while their children slept upstairs.

Rob Brooks, manager of the Otter Garden Centre where Jennifer worked, said she "was a well loved member of staff and a very kind person".

Mr Chapple was a Computing Teacher at West Somerset College in Minehead.

Floral tributes were laid at the scene as police stood guard close to the property on a new build estate. Other officers combed through nearby gardens and checked drains.

A note attached to one bunch of flowers read: "Jennifer, you lit up the street with your smile.

"You and Steve have been such wonderful friends since you arrived in our lives. Such a kind and welcoming couple.

"You have left a void that will be felt across all those who knew you. Words cannot express how much we'll miss you both."

If you like this story, make sure you sign up to one of our totally-free newsletter's here.