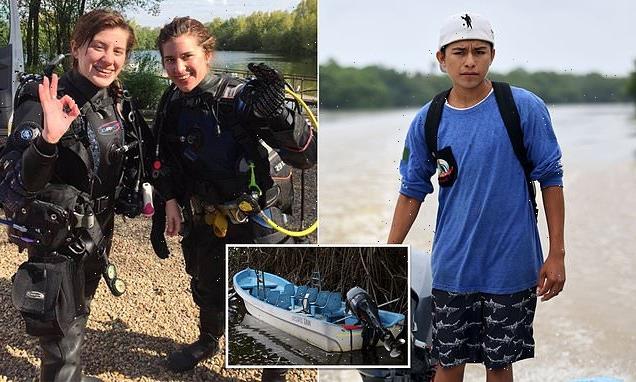 EXCLUSIVE: ‘I’ll never forget their faces, it was sheer panic’: Mexican tour helper, 16, describes how he pulled a British woman, 28, to safety on his boat after she was rescued from the jaws of a 10ft crocodile by her twin sister

A quick-thinking boy has revealed how he helped save the life a British woman who was attacked by a 10ft crocodile in Mexico.

Moises Salinas, 16, who works as a helper on a tour boat named Espatula Rosada, jumped into the shallow murky waters along the Manialtepec River last Sunday, where he helped pull Melissa Laurie, 28, onto his boat before rushing her and her sister to a waiting ambulance 20 minutes away.

Seconds earlier, Melissa had been dragged under the water and put into a terrifying death roll as the crocodile tried to drown her, and only survived because her twin Georgia fought off the ten-foot predator by punching it repeatedly in the face as she dragged her sister to safety.

Moises Salinas, 16, who works as a helper on a tour boat named Espatula Rosada, jumped into the shallow murky waters along the Manialtepec River last Sunday

Salinas told Dailymail.com: ‘I’ll never forget seeing their faces, it was sheer panic. Melissa was saying ‘’help us, help us.’’ I jumped into the water and grabbed her from behind with my arms grasped around her front, keeping her head above water.

‘We arrived at the same time, by the time we go there the crocodile had left the area. The noise from our engine scared off the crocodile.’

The pair, from Berkshire, were taking part in a wildlife tour on the Pacific west coast when they were attacked by the 10ft predator.

Salinas said that earlier in the tour the group were having a bonfire when they walked away with two men.

A while later, one of the men came running out of the bushes yelling for help.

Salinas jumped in the boat with the man and a few other tourists and sped up the river to where the women were last seen.

The man pointed into the low marshy area where the crocodile attached the sister, and Salinas drove the boat into the area and saw the two women in the water.

He took a DailyMail.com reporter and photographer to the area where the attack happened, where you could still see beaten down marsh grass where Melissa and Georgia fought off the crocodile.

While pulling Melissa to safety Salinas asked Melissa, ‘Why didn’t you listen to me?’ Salinas said Laurie replied back in Spanish, ‘my sister is hardheaded.’ 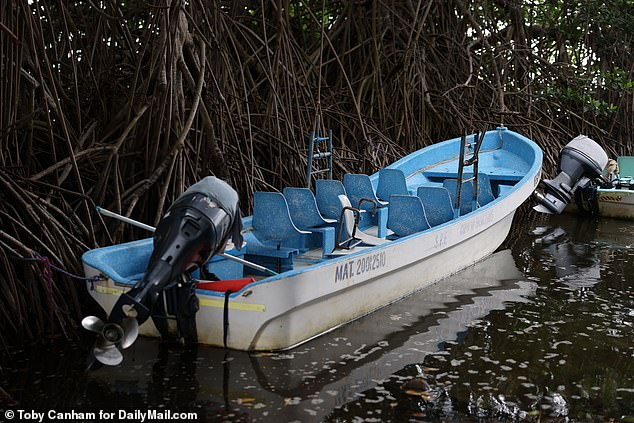 Salinas said she was ‘struggling to breathe, I didn’t know if she was going to live. Right after she was put on a seat, she vomited up blood. I don’t know if it was from her injuries or what.

‘Her sister had her arms around her the entire 20 minute boat ride back. You could see the fear in her face.’

Salinas said before he left the shore he called 911 around 7:45 PM–showing DailyMail.com a screenshot of the phone call– and told the emergency operator about the accident and requested for an ambulance to meet them when they arrive.

Civil Protection officer Said Guillermo Hernandez was at the scene of the accident when DailyMail.com was there on Friday, June 11th, he said ‘they were further investigating the accident.’

Earlier this week Georgia spoke for the first time since the attack and told her family that Melissa has come out of her coma and her condition is improving.

Georgia added, in a WhatsApp voice message to her family: ‘She’s been breathing on her own very well.

‘She can’t talk because of the soreness of the tube but she can hear.’

Their mother Sue said: ‘Melissa is off the intubation. She has been brought out the medically induced coma and is breathing for herself. She recognised Georgia. That is really, really good news.

‘We were worried that because we did not know how long she had been under water without oxygen. ‘

It comes as it was revealed a rogue guide led the British sisters into the crocodile infested waters on an unlicensed tour.

The German backpacker, known locally as ‘Richie’, arranged the swimming tour to the Manialtepec Lagoon, 10 miles from Puerto Escondido, where the predator pulled Melissa under water.

The sisters were among a group of 25 foreign tourists taken by the unlicensed and inexperienced guide to a part of the lagoon where crocodiles breed and raise their young on Sunday evening.

Richie, who is a backpacker organising unlicensed tours to fund his travelling, agreed to take the twins after meeting them at a hostel in Puerto Escondido, a popular surfing resort.

However due to his ignorance of the lagoon, he took the women into a crocodile nesting area where the reptiles are fiercely protective of their eggs.

He took the sisters on a bioluminescent tour where tourists marvel at the glowing blue plankton-rich waters at twilight are held on the other side of the ten-mile long lagoon. 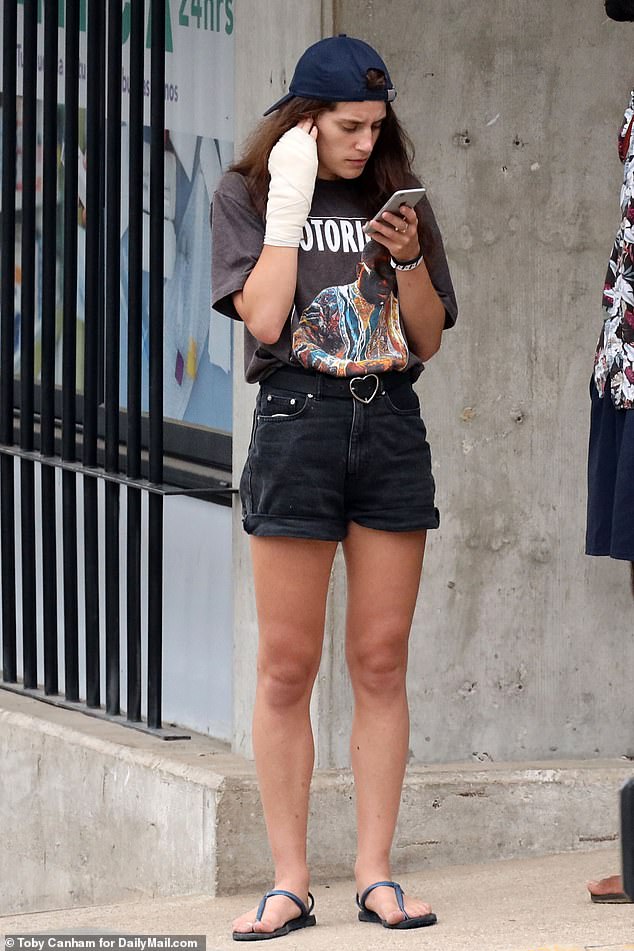 Melissa praised for beloved sister for fighting off the beast to save her life. Pictured: Georgia is pictured after the attack in Puerto Escondido in Mexico

Melissa was half-drowned and suffered horrific injuries to her arms, legs, face, some of which have become septic. Doctors put her in a medically induced coma to help her recover.

Georgia also suffered extensive bite wounds to her arms and hands. One crocodile bite went through the palm of her hand.

Rogue guide Richie visited the sisters in hospital on Sunday and fled after he saw the extent of their injuries.

The German declined to comment when contacted by MailOnline today [Thursday].

Local wildlife experts believe the sisters may have been attacked by a female crocodile protecting her eggs.

‘While I am relieved they are getting better, I wished they would have heeded mine and other warnings about swimming in the river.’

Hernandez told DailyMaill.com their theory so far: ‘The group were swimming upstream against the river current and after swimming several hundred yards they go tired and decided to go ashore and walk back to the group.

‘Along the shoreline the grass is 15 feet tall at places, they choose to go into an area where the grass wasn’t so high making it easier to navigate to the shore. Unfortunately for them they didn’t realize was its nesting season for crocodiles in June and July where they lay their eggs and it these area is a prime are for crocodiles.’

Hernandez added that since the accident they have put up warning signs for crocodiles for tourists, ‘the locals know these waters are infested with crocodiles.’

Salinas added that ‘you have to respect Mother Nature and the environment. The crocodile was just defending its area or home just as we would as humans.’

‘I feel bad for the girls but had they listened to the Captain they wouldn’t be in their situation. No one else from the group jumped into the river.

Salinas said he’s heard of the several thousand dollars that have been donated to the sister for their bills and recovery, he said he doesn’t want a reward for helping save their lives. ‘I would like to have a thank you from them.’

Santos said that he’s company is not to blame for their accident and reaffirmed at no time did any of his workers say that it was safe to swim in the river. ‘My people would never tell any tourist it’s safe to swim in the murky river, it’s dangerous not only are there crocodiles, the current can be difficult at times.’ Santos gave a video to DailyMail.com showing a crocodile he filmed on June 10th near the area where their boat docks, it’s estimated to be about 12 ft in length.

As for Richie, no one has heard from him. Santos said he thinks he left town

‘I wish the girls a full recovery,’ Santos added.

EXCLUSIVE: ‘I’m grateful I came out alive and had Georgia to fight for me’: British woman, 28, rescued from the jaws of 10ft crocodile by her twin in Mexican lagoon speaks for the first time since the attack to thank her sister for saving her life

By Nick Fagge from MailOnline

The British woman rescued from the jaws of crocodile by her twin in Mexico has spoken for the first time since the vicious attack to thank her sister for saving her life.

Melissa Laurie was dragged under the water and put into a terrifying death roll as the crocodile tried to drown the 28-year-old zoo keeper from Berkshire.

She only survived because her twin Georgia fought off the ten-foot predator by punching it repeatedly in the face as she dragged her sister to safety.

Now speaking for the first time Melissa told of her gratitude that she came out of the horrific ordeal. 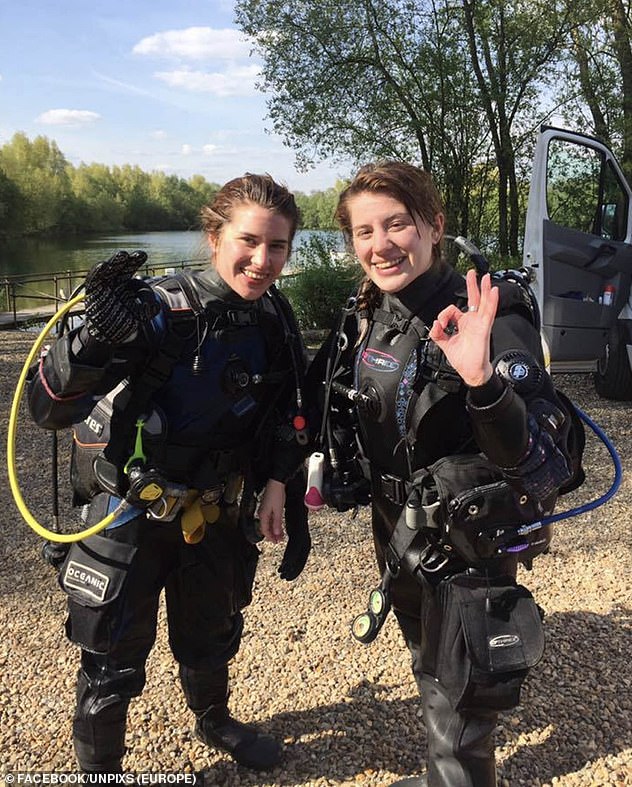 Determined to come to her sister’s aid, Georgia punched the crocodile repeatedly in the head before dragging Melissa away by her hair

And she praised for beloved sister for fighting off the beast to save her life.

In a short voice message from her hospital bed in the surfing resort of Puerto Escondido she told MailOnline: ‘I am extremely grateful that I came out of this alive.

‘And that I had Georgia fight my side for me.

‘So I am very happy for that.’

Melissa suffered terrible injuries from the attack including deep bites to her body, legs, hands and wrists – some of which turned septic. She also suffered a suspected punctured lung and was put in a medically induced coma to aid her recovery.

But she has been brought round now and is able to speak to Georgia who visits her regularly at the private hospital where she is being treated.

The girls’ parents have told of their relief that Melissa’s condition is improving and have been sent a picture of their daughter in hospital.

Mum Sue Laurie told MailOnline: ‘Georgia sent us a picture of her in hospital bed in intensive care and we’ve seen Melissa for the first time.

‘She is looking quite a bit better. 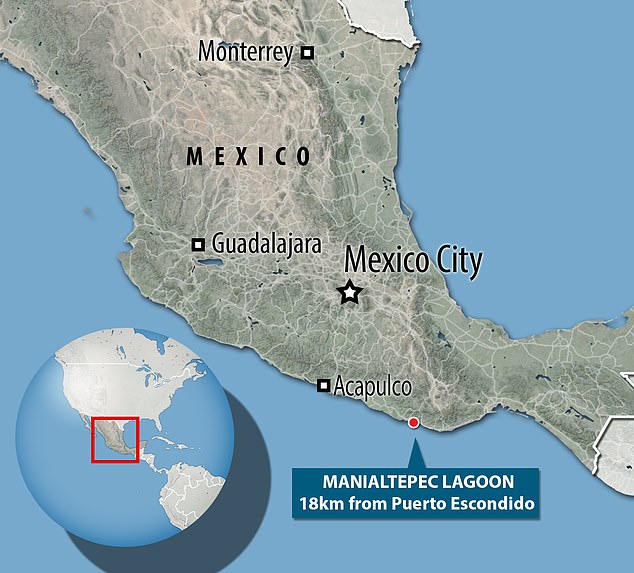 ‘She has traces of black eyes and a scratch on her face.

‘She still has monitors on her fingers – she’s still all wired up. And she has an oxygen tube going into her nose.

‘But it’s great to see to see her.

‘She is trying to smile but it’s obvious that she is in a lot of pain.’

The family have also received the first medical bill for Melissa’s treatment, which dad Sean has described as ‘eye-watering!’.