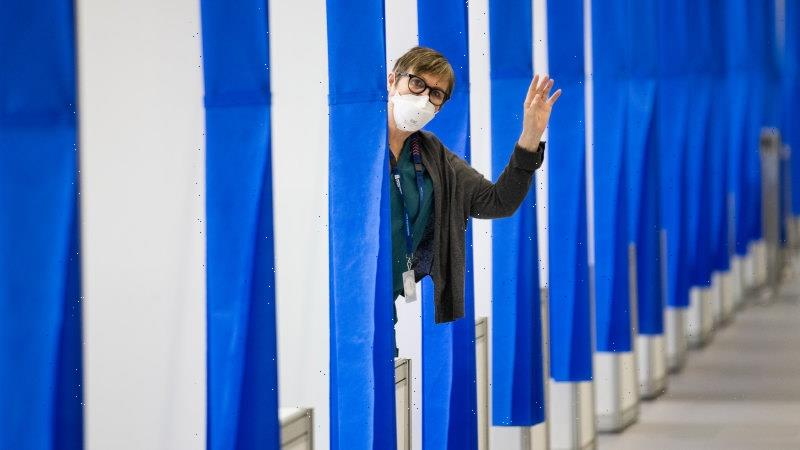 The Victorian government confirmed on Thursday that eight sites that had helped deliver jabs to millions of people would close, starting from the end of the week, as demand temporarily slowed to a trickle. 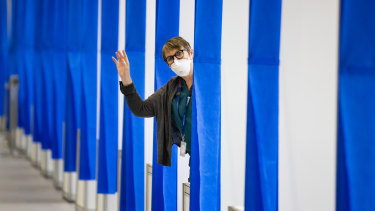 Nurse Kerryn Lajoie was feeling nostalgic at the Melbourne Convention and Exhibition Centre on Thursday, as it was confirmed it would stop operating as a mass vaccination clinic soon.Credit:Jason South

The Royal Exhibition Building, first deployed to the vaccination effort in March, will close by mid-December, along with the Melbourne Convention and Exhibition Centre.

In its heyday earlier in the year, the city site was administering 2500 to 3000 vaccinations a day. By late Thursday afternoon, about 40 people had been through the hub, according to the site’s associate nurse unit manager Kerryn Lajoie.

“It is an amazing contrast,” she said. “We are getting some people coming in for booster doses. Surprisingly, we are still getting the odd first dose,” she said.

Clinics at Melbourne showgrounds, St Vincent’s Private at Werribee and the Olivia Newton-John Cancer Wellness and Research Centre will close next week, while the Eastland and the Eagle Stadium indoor clinic in Wyndham will operate for the last time this week. 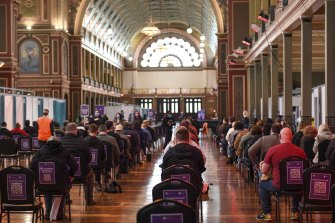 Some of Victoria’s state-run vaccination hubs are set to close.Credit:Penny Stephens

Fifteen sites will remain open, including at the Sunshine and Heidelberg Repatriation hospitals and in the regional cities of Bendigo, Wodonga, Wangaratta and Shepparton.

Takeup of first and second doses in Victoria has slowed considerably since late October. About 20,000 doses were delivered on Thursday, compared to more than 100,000 during record days in September and October.

Vaccination sites run by the Victorian government, including the mass hubs, have so far delivered more than 4.8 million COVID-19 vaccines.

But Royal Australian College of General Practitioners president Karen Price said Australia was now in “the eye of the storm” when it came to the vaccination program.

Dr Price said the third dose, set to be widely delivered to adult Australians six months after their second, was going to be critical in determining how many people ended up catching COVID-19 next winter.

She said some booster doses were likely to be delivered opportunistically to patients coming in for other appointments. But because the Pfizer vaccine comes in multi-dose vials, GP clinics would still have to run some vaccination clinics.

The Victorian president of the Australian Medical Association, Roderick McRae, said it was a “good thing” that nurses would return to public hospitals ahead of the Christmas period, when people planned to take leave. 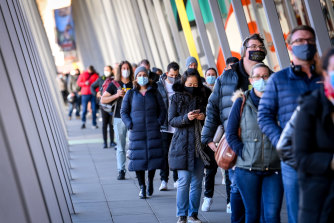 People queue for COVID-19 vaccinations at the Melbourne Convention and Exhibition Centre in June. Credit:Eddie Jim

Deploying nursing staff to the vaccination centres had depleted hospitals of key staff at a critical time in the pandemic, he said.

“Those who were still working in the public hospitals had to work harder and longer, more overtime, and it led to the fatigue and exhaustion.”

However, Dr McRae warned that Victorians may now have a difficult time getting their booster shot within six months of their second COVID-19 dose, given that pharmacists and GPs were turning away from the program due to inadequate federal funding.

“The pharmacists are no longer interested in providing vaccinations because they’ve suddenly noticed they’re not making enough money. General practitioners have suddenly realised that the Commonwealth Government is not rebating patients sufficiently to make it a viable business opportunity for them,” he said.

“Everybody needs to get their third dose six to seven months after the second dose and we need there to be minimal obstacles in order to get that dose.”

The Pharmacy Guild of Australia has been warning that Victoria faces a shortage of pharmacists willing to deliver booster jabs, because they do not receive enough money from the federal government to cover costs of the program.

On Thursday, a Victorian Government spokeswoman called upon the Commonwealth to provide more support to pharmacies so the workforce at state-run sites can get back into other areas of the health system under pressure.

Across the country, nearly 580,000 people are eligible to receive a booster shot, with demand set to increase in coming months.

The federal government says it has enough Pfizer to meet all current and future demand for first, second and booster doses, and is still seeing strong interest in the vaccination program from pharmacies.

The Morrison government has entered an agreement with Moderna to supply booster vaccines and has an advance purchase agreement with Novavax, who may also seek to apply for booster shots if the vaccine is approved by the TGA.

Ms Lajoie, who spent more than a decade running a yearly event preparing for immunisation in a pandemic, believes there could be a place for more mass hubs again when the booster program was scaled up.

But they may look different and be located elsewhere in the future.

“It’s always going to be great to get through a lot of people,” she said. “It’s always the last 20 per cent where you put in as much effort as you put in for the first 80 per cent.”