Did you head into the city today? Not so long ago, about a million people would have answered yes to this question. Pre-pandemic, the City of Melbourne was the fastest-growing municipality in the country, with a daily influx of workers, shoppers and tourists who piled in to work and play in what was ranked among the world’s most liveable cities. A large chunk of this daily migration was office workers, who came in from the suburbs, spent between eight and 10 hours a day in town, bought their lunch at city cafes and stepped out in the evening for dinner, drinks and sometimes a show.

The seismic impact of the coronavirus pandemic stopped this way of life in its tracks. The crisis closed borders, brought public health orders to keep people at home and led to a general unease about using public transport. 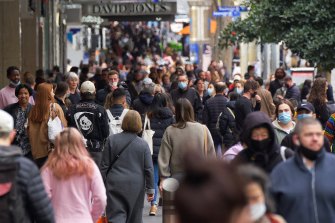 We adapted virtually overnight to our new circumstances. Hundreds of thousands of people began working at home and the city, which for many years had been nurtured into a social, cultural and economic powerhouse, fell quiet.

As we move further into our second year of living with COVID-19, it seems increasingly likely that many of the changes that happened so rapidly in 2020 are here to stay. The Age reported on Monday the results of a survey of the nation’s 50 largest companies, a large majority of which believe a hybrid work model, whereby time is split between the home and the office, will endure long after the danger of the pandemic has passed.

There are differences in the degree of flexibility offered by the companies, which collectively employ more than 1 million people in Australia. Tech firm Atlassian, for example, requires its 5700 staff to come into the office just four times a year, while telco Optus argues against a “dial-in culture” for its 7000 staff, asking them to work three or four days a week from the office on the premise that “co-location fosters collaboration and innovation”.

The nation’s Productivity Commission chair, Michael Brennan, backs the hybrid model, and says he’s seen “scant evidence” of a drop in productivity resulting from working at home and “good grounds for optimism” about this general change. He says the absence of a commute and the ability to juggle tasks from home can lead to an overall improvement in wellbeing.

Business is leading the way in this societal change and The Age believes a permanent transition to more flexible working arrangements is inevitable and, ultimately for many, a positive.

But we recognise there are competing priorities and there will be winners and losers. Suburban cafes and shops may thrive from the extra population in their areas, while CBD businesses and landlords that rely on city workers are under threat. What will happen to the floor spaces currently occupied, at high rents, by big companies? How will its street life change if there is no longer a critical population mass to fuel the cafe and bar culture that has made Melbourne so vibrant?

While the trend has clearly been towards an emptier city, a Deloitte Access Economics report commissioned by Melbourne City Council projects Melbourne will bounce back to its pre-COVID-19 peak of about $74 billion in gross regional product by the second half of 2024.

Melbourne lord mayor Sally Capp told The Age last month that the city needed a “new rhythm” and the council was looking at ways, such as big cultural events, to attract people in large numbers to the city. There seems hope in this strategy. A combination of blockbuster arts exhibitions, the Comedy Festival and school holidays led to a surge in CBD foot traffic in April, when numbers surged to about 70 per cent of pre-pandemic levels.

But risks remain. Persistent COVID-19 outbreaks and strict quarantine rules have led to the cancellation of this year’s Rising Festival and the Australian Formula One Grand Prix – events that would have brought large crowds to Melbourne. There are no easy answers here. But Melbourne and its people are resilient and adaptive, and if they display the same agility now as they did at the start of the pandemic, Melbourne can once again come alive and rank among the world’s most liveable cities.