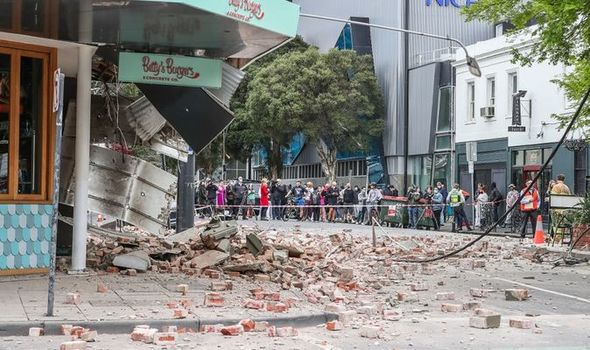 The earthquake measured 6.0 on the Richter scale and caused damage to several buildings in the country’s second-largest city. Aftershocks from the quake on Wednesday reached a magnitude of 4.0 and tremors were reportedly felt more than 500 miles away in Adelaide and across Sydney.

The epicentre of the 6.0 quake centred near the rural town of Mansfield in the state of Victoria, around 200 km (124 miles) northeast of Melbourne.

Shocking pictures show the partial collapse of some buildings near Melbourne, with huge piles of debris lining the streets.

Some residents have also been forced to evacuate their homes as power lines went down.

Australian Prime Minister Scott Morrison said at this stage there were no reports of any serious injuries.

Mr Morrison also acknowledged the concerns of many and said an earthquake “can be a very disturbing event”.

He added: “We have had no reports of serious injuries, or worse, and that is very good news and we hope that good news will continue.

“It can be a very disturbing event, an earthquake of this nature.

“They are very rare events in Australia and as a result, I am sure people would have been quite distressed and disturbed.”

This is a developing news story, more to follow.