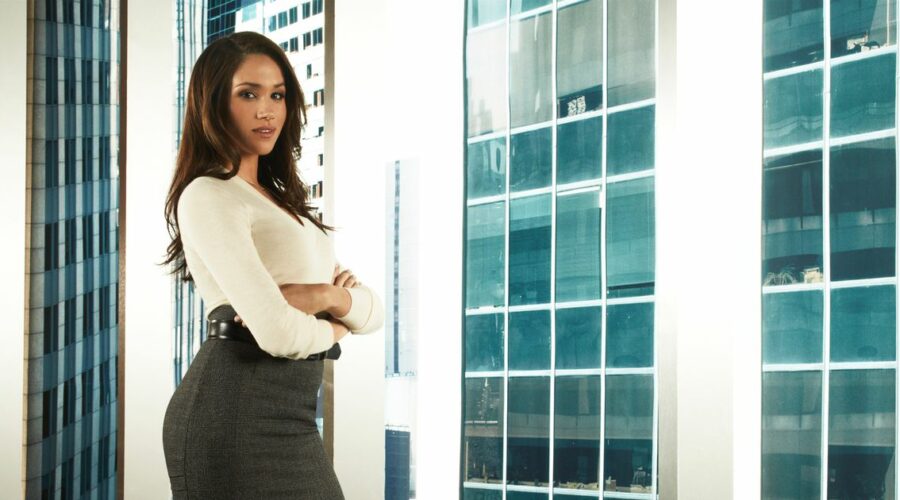 The beloved US broadcasting giant, who carried out approximately 50,000 interviews during his career, was pronounced dead at the age of 87 on Saturday, January 23.

Earlier this month, he had been taken to hospital to be treated for coronavirus.

Back in 2013, Larry interviewed Meghan and co-star Patrick J Adams about their experiences on the set of hit TV show Suits.

During it, he asked Meghan about her character, Rachel Zane.

The Duchess of Sussex started explaining that she was a paralegal at the law firm.

Larry then chimed in: “Seductive?”

Meghan responded: “I don’t know, do you think so Larry?”

The host said it was “just a comment” as Meghan and Patrick started laughing. According the US reports, Meghan appeared "flustered".

During the interview, Meghan also showed off her calligraphy skills.

She said: “I went to an all girls Catholic school, handwriting class was one of those lost arts.”

Meghan then jotted down “I love Larry King” in her impeccable handwriting.

In a 2018 documentary, Larry said that Princess Diana would have approved of her marriage to Prince Harry.

He told Cover Story: Meghan Markle – The Prince and The Game Show Model: "Princess Diana would have loved this.

"She wanted the monarchy to become every day and having an interracial marriage in the monarchy in London is a great step forward."

It read: "With profound sadness, Ora Media announces the death of our co-founder, host, and friend Larry King, who passed away this morning at age 87 at Cedars-Sinai Medical Centre in Los Angeles."

Describing the talk show host's many accolades, the statement went on to pay tribute to King's legacy as a broadcaster over the course of his lengthy career.

It continued: "For 63 years and across the platforms of radio, television and digital media, Larry’s many thousands of interviews, awards and global acclaim stand as a testament to his unique and lasting talent as a broadcaster.

"Additionally, while it was his name appearing in the shows’ titles, Larry always viewed his interview subjects as the true stars of his programmes, and himself merely an unbiased conduit between the guests and audience.

"Whether he was interviewing a US president, foreign leader, celebrity, scandal-ridden personage, or an everyman, Larry liked to ask short, direct, and uncomplicated questions."