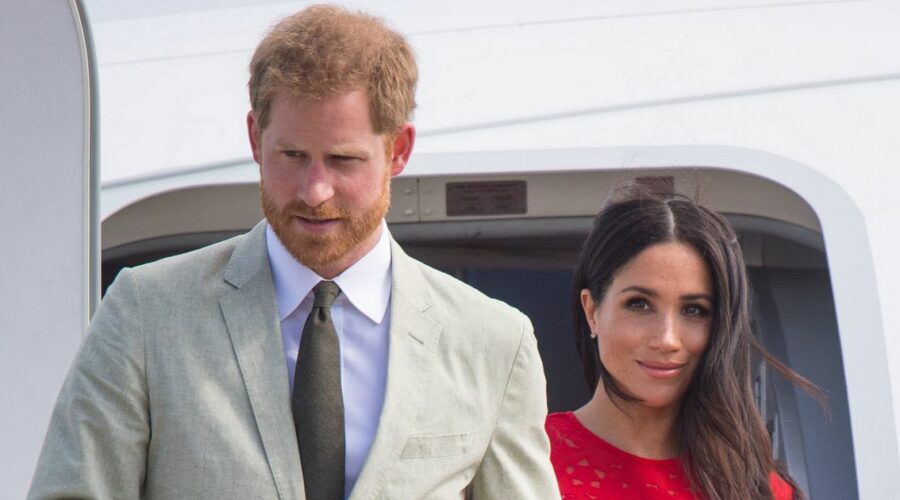 Meghan Markle and Prince Harry's plummeting popularity has been bad news for professional lookalikes who now get 'hit with wet sponges', according to a royal expert.

Speaking on his YouTube channel, royal commentator Neil Sean claimed that doppelgangers for the Duke and Duchess of Sussex told him that they used to make an "incredible living".

However, he added that since the couple stepped down from senior royal duties at the start of 2020 the demand for lookalike work has changed drastically.

Sean said: "I’ve contacted quite a few agencies and I was speaking to some lookalikes myself recently.

"What’s interesting about them is that once before people were fascinated by them and, of course, they liked them and wanted to be pictured with them and stuff like that.

"Now the sort of bookings they’re getting are for things like Halloween nights and nightclub appearances, where perhaps wet sponges may be thrown at them.

According to the latest YouGov polling, Harry is the ninth most popular senior royal with a mere 36% approval ranking.

Lower still is Meghan with 28%, making her the second most unpopular royal – beaten only by Prince Andrew.

Speaking to the Daily Mail earlier this year, Sarah Mhlanga – a Meghan lookalike – explained how her work has changed for the worse over the past few years.

She described how in 2017, following Harry and Meghan's engagement: "Offers of work came rolling in, from royal-themed parties to walkabouts, promotional work and TV appearances.

"In the run-up to the Royal Wedding I was doing one or two Meghan bookings a week and the phone was ringing off the hook to the extent that I was thinking about giving up my day job."

However, Sarah added that critics of Meghan often direct their anger at her now, using her as a "punchbag".

She said: "I get messages saying I’m attention-seeking and that I should be ashamed to represent Meghan. It’s so hurtful."

The most infamous Sussex doppelganger is Matthew Hicks, who starred in FOX's 2014 reality show called I Wanna Marry Harry.

The show saw several American women compete in a Love Island-style format for Harry's affections, unaware that they were actually talking to a lookalike.

Another lookalike Rhys Whittock revealed what it's like to party with other royal doppelgängers.

He says the royal lookalikes are more like a 'big happy family' – similar to the real royals in Buckingham Palace and Windsor Castle.