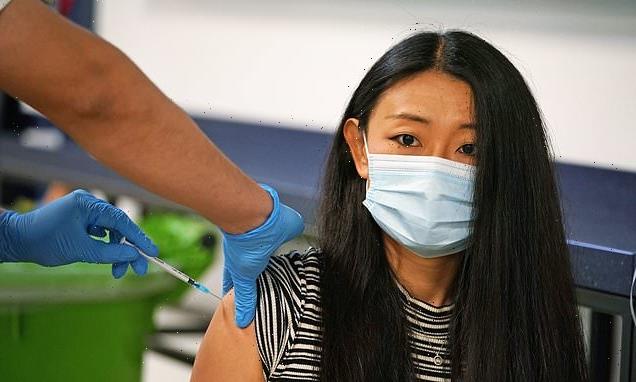 Fresh hope to free up your summer: Matt Hancock plans to scrap isolation for vaccinated people who come into contact with Covid cases as ministers also eye boost for foreign travel by axing quarantine for tourists who have had two jabs

Families desperately hoping for a summer of freedom were given a double boost last night.

The success of the vaccine rollout means ministers are looking to ease strict rules on both self-isolation and travel quarantine.

Matt Hancock wants to ditch the stay-at-home order for fully-vaccinated people who come into contact with Covid cases. And those who have had two jabs would also be able to avoid remaining indoors after holidays abroad.

A Whitehall source said there was a ‘keenness to get going’ with this relaxation of curbs as soon as August as long as it was safe. Ministers had been hesitant to favour vaccinated people but now believe it is no longer unfair to do so. 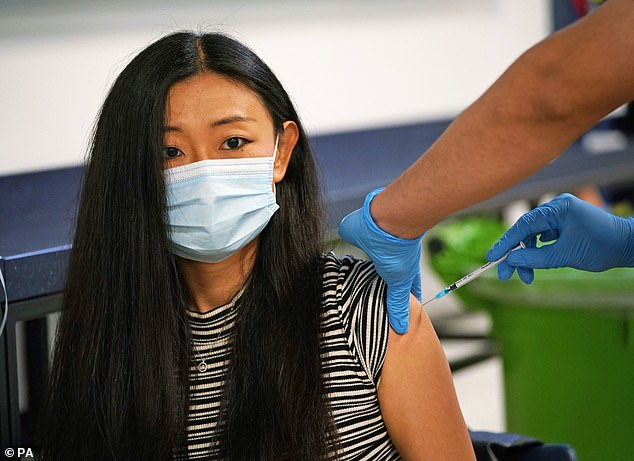 ‘Now we’re at the point where all over-18s can book, the balance of fairness has shifted because of the progress we’ve made and where we’re at with the programme,’ the source said.

It is not clear whether there would be an exemption for children – or for those who are unable to be vaccinated.

Some 59.5 per cent of British adults have had two doses of a vaccine and 81.6 per cent have had at least one dose.

As the UK recorded another 9,284 coronavirus cases and six deaths:

Ministers have been buoyed by the effectiveness of vaccines against the Indian or Delta variant, with the latest data suggesting just one in ten patients in hospital with Covid – 84 in 806 – had received both doses.

Under the plans, daily lateral flow testing would replace the isolation and quarantine rules for the double jabbed, although no final decisions have been made. A pilot study with up to 40,000 participants is under way and is due to report before the end of the summer. 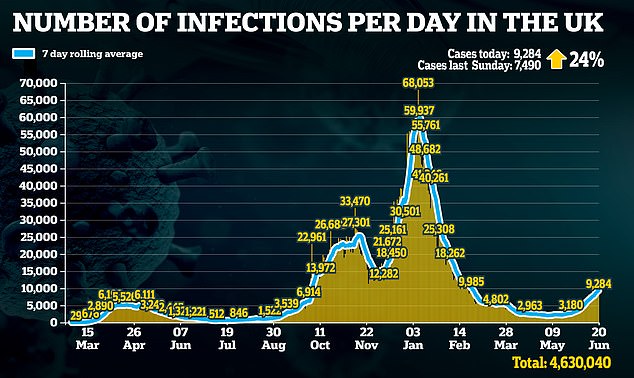 Cabinet Office minister Michael Gove took part earlier this month after he was notified that he had come into contact with someone who had tested positive. Anybody who has been notified through NHS Test and Trace as a contact of a positive case must self-isolate for ten days, regardless of their vaccination status.

But under the pilot scheme, people are exempt from the requirement to self-isolate if they take a rapid test daily for a week. They must continue to test negative and not develop symptoms.

Justice Secretary Robert Buckland yesterday said ministers were ‘trying to be as flexible as we can’ with quarantine and self-isolation rules.

He told BBC One’s The Andrew Marr Show that evidence was still developing on double vaccinations but it ‘looks really encouraging, we’re trying to be as flexible as we can’.

Dr Susan Hopkins, strategy chief for Public Health England, said there may be ‘alternatives to isolation’ for holidaymakers who have been double vaccinated.

She told the BBC yesterday: ‘We’ve talked a lot to countries like Israel who are ahead of us in the vaccination campaign, and they are now really looking at allowing people to come into their country who’ve had two vaccines and not needing to isolate, and they are allowing their population to travel more.

‘We will need to be alert and will need to consider how we can measure the response of these vaccines to new variants that come along.

‘But we are moving steps forward, and I think that in a time in the future, I’m not sure when, I can imagine a situation where we will have alternatives to isolation for people who have two doses of the vaccine.’ Paul Charles of the PC Agency, a travel consultancy, said there was ‘absolutely no reason why those who are double jabbed should have to quarantine from an amber country when they return to the UK’.

He said the UK was ‘an outlier’ and could not carry on with this ‘ridiculous policy’, with both the US and EU now having removed the requirement to quarantine for fully-vaccinated arrivals.

Analysis of official data showed there were no ‘variants of concern’ found in passengers arriving from ‘amber’ countries from May 20 to June 9. And there were no positive cases among arrivals from green list countries, where ten-day quarantine is not required.

Professor Wren, who is based at the London School of Hygiene & Tropical Medicine, said England might open up ‘sooner rather than later’ thanks to the success of the vaccine programme.

He added: ‘We’d still need to be vigilant – but vigilance and vaccination are the two words. If the numbers continue to be promising then I think there’s great hope we could open up on July 5.’ 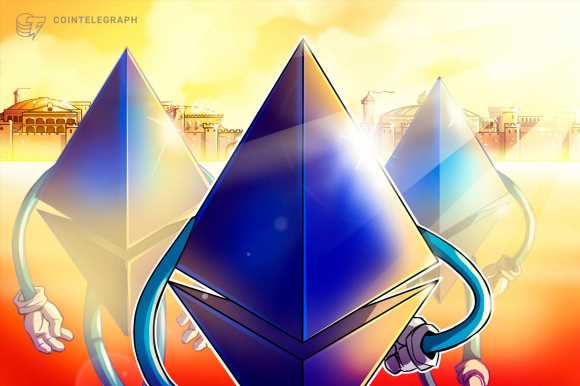