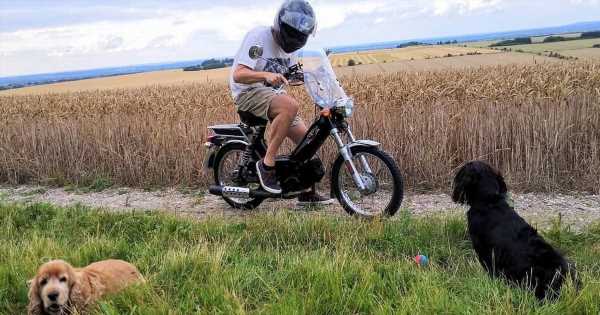 A bloke embarking on a charity moped tour of the UK has put a cheeky twist on his fundraising mission.

Paul Taylor, from Wantage in Oxfordshire, is setting aside the more traditional Lands End to John O’Groats route for a tour of the nation’s rudest-named locations.

He sets off from Shitterton, in Dorset, this week and his Moronic Moped Marathon, as he calls it, will take him as far north as Twatt in Orkney.

"I expect my 1800-odd mile marathon journey to take 12 days at the breakneck average speed of approx 20mph," he said.

Other strangely-named places on Paul’s itinerary include Dull in Perth and Kinross, Titty Ho in Northamptonshire, and Cockpole Green in Berkshire.

Paul told BBC News: "Everyone starts a long journey like that from Lands End to John O' Groats – I wanted to do something similar, with a bit of twist."

He explained that he was setting off on his epic journey in memory of a mate who had recently died of cancer.

Paul said that seeing his friend, Alexis Leventis die of lymphoma at just 55 years of age made him want to do something "to help beat this awful disease".

As he tours the country’s sauciest place names, Paul will be raising money for the Institute of Cancer Research

"I thought this trip was a suitably ridiculous place to start and, as Alexis was a motorcyclist as well as a car nut, two wheels was not only appropriate but made it more of an adventure."

As well as oddly named towns, such as Dull in Perth and Kinross and Booze in the Yorkshire Dales, Paul will be stopping off at a few streets with quirky names too.

The Knob in King's Sutton, Northamptonshire, and Butthole Lane in Shepshed, Leicestershire, are both on Paul’s list.

His final destination, he says, is the aptly named Bell End.

Paul says he has deliberately set a low target, of a pound for every mile of his 1,800-mile challenge, and if you’d like to chip in his JustGiving page is here.