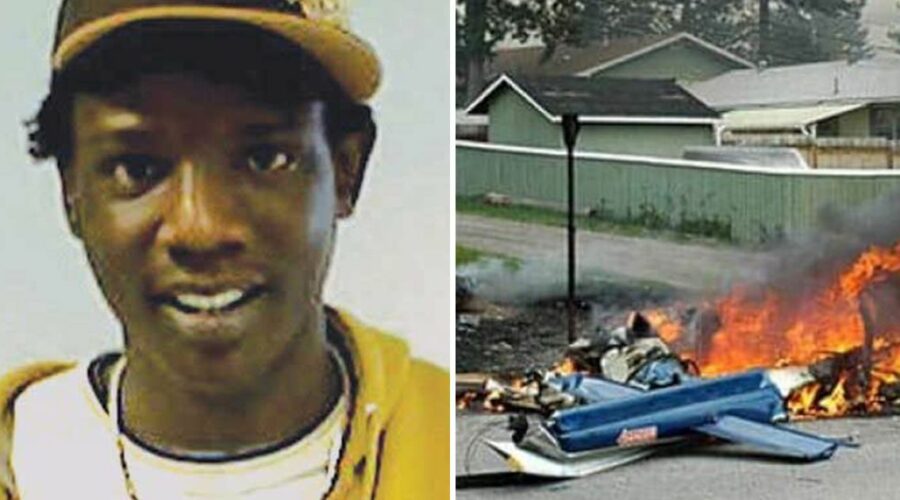 A man took photos of the aftermath of freak helicopter accident unaware that his best friend was underneath the burning wreckage.

Student Isaac Hockley was a keen photographer who had been freelancing for his local newspaper in Canada when he got the call to get pictures of a tragic accident that had occurred right in the middle of his city.

A chopper flying over Cranbrook in British Columbia had suddenly lost power and plummeted onto the streets of the quiet neighbourhood below, killing all three crew onboard.

But what Hockley and everyone else nearby failed to realise was that 23-year-old Isaiah Otieno had been right below the aircraft as it hit the ground.

A student at the same nearby college as Hockley, the 6ft 9in Kenyan had stood out from the minute he arrived there two years before.

During that time Otieno – dubbed 'The Gentle Giant' by locals – and Hockley had become inseparable and it's believed he'd been en route to post some letters to his family back home when fate struck.

The fact he never heard the helicopter in trouble above his head was thought to be the result of him wearing a hoodie and listening to music on his iPod at the time.

"I've never, ever heard of a helicopter falling out of the sky," said a shocked Hockley when later interviewed.

"You don't know how to deal with it until it happens."

He added that Otieno had been the son of a Kenyan politician and was a natural businessman destined for great success.

"It was pretty hard (for him) to come to a redneck town like this," said Hockley, recalling the time that pair had encountered a moose in the middle of the road.

"He didn't even know what it was and never did stop talking about it afterwards."

Meanwhile, Nick Rubidge – the president of the college both men attended – said Otieno was liked by all he met.

The cause of the helicopter crash, which occurred on May 13, 2008, was eventually attributed to engine failure, although the contributory factors behind that were never determined due to the extent of the damage sustained on impact.

However, Cranbrook residents and police praised late pilot Edward Heeb for somehow managing to avoid hitting any buildings or schoolyards after his craft went into a tail-spin.

Otieno's parents said they'd spoken to their son on the phone just an hour before he'd died and had been planning to throw a huge homecoming party for him.