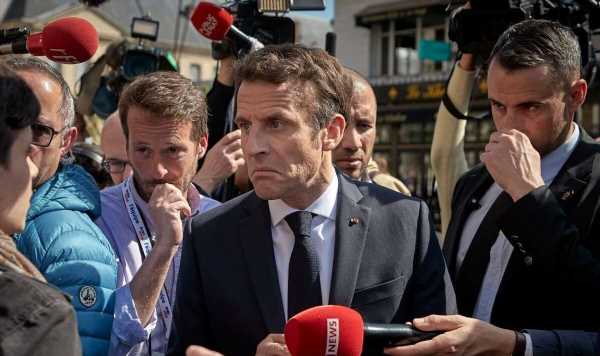 According to French newspaper Le Canard enchaine, known for its reporting from insiders in the French government, Mr Macron exploded with nervousness in a meeting with his advisers last Sunday, April 17. Mr Macron and Ms Le Pen faced off in a debate on Wednesday evening, for which both had prepared meticulously, according to Gala. In the middle of Sunday’s brainstorming session, as they discussed the correct attitude to adopt in the debate, Mr Macron reportedly lashed out at his advisers, exclaiming: “Stop telling me that we must avoid arrogance!

“You have told me a hundred times, I understood.”

“And even before you told me. This is not a yoga class.

“I don’t need a behavioural coach. Look for hard-hitting arguments instead.”

Survey results published hours after the face-off showed Macron on 59 percent of the vote.

This suggests that the debate had a significant impact on public perception of the pair, as prior to Wednesday night the pair were only eight to 12 points apart in opinion polling.

In an unsurprising result following Mr Macron’s alleged outburst at his advisers, half of those polled by Elabe after the debate found him to be the more arrogant contender.

Mr Macron was considered to be on the attack throughout the debate, treating it as though he were the opposition rather than the incumbent.

Le Monde reported that Ms Le Pen had been “suffocated by an offensive Emmanuel Macron”.

Jordan Bardella, head of Le Pen’s far-right National Rally (RN) party, accused Macron of being the “number one public insult thrower” adding: “When he insults Marine Le Pen as do his supporters, he is really insulting the French.”

A key moment for Ms Le Pen came when she confirmed that she stood by her controversial idea of banning the headscarf.

While she claimed she was not “fighting against Islam,” she went on to say: “I’m telling it in a very clear manner: I think the headscarf is a uniform imposed by Islamists.”

Macron responded: “What you’re saying is very serious. You are going to cause a civil war. I say this sincerely.”

Mr Macron also took the opportunity to highlight Ms Le Pen’s links with Russia, stating: “You are in fact in Russia’s grip.

“You took out a loan from the First Czech-Russian Bank in 2014, working with people who were directly involved in the war in Syria.”

Ms Le Pen responded by arguing she “had no other choice” but to take out the £8million loan because “French banks would not lend to us.”

She added: “I offer my solidarity and absolute compassion to the Ukrainian people in front of millions of viewers.”