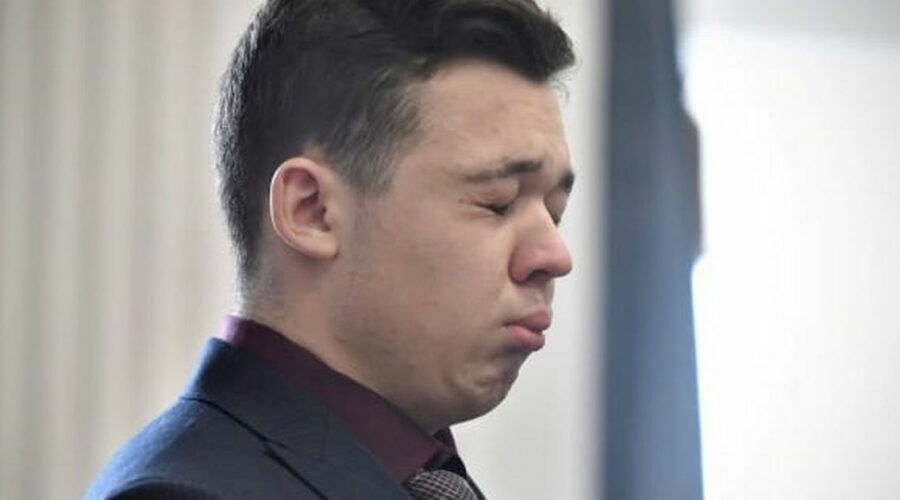 Kyle Rittenhouse broke down in tears as he was acquitted of murder in the fatal shooting of two men during racial justice protests in Kenosha.

Footage from inside the courtroom on Friday (November 19) shows his lip wobble before he lets out a sob as the verdict is announced.

He then slumps and collapses to the floor in shock before being helped back into his chair.

The jury found Rittenhouse, 18, not guilty on all charges: two counts of homicide, one count of attempted homicide for wounding a third man, and two counts of recklessly endangering safety in the Wisconsin city in August last year.

"We are all so very happy that Kyle can live his life as a free and innocent man, but in this whole situation there are no winners, there are two people who lost their lives and that's not lost on us at all," David Hancock, a spokesman for the Rittenhouse family, told Reuters.

Rittenhouse claimed self-defence after he shot and killed Joseph Rosenbaum, 36, and Anthony Huber, 26, and fired a bullet that tore a chunk off the arm of Gaige Grosskreutz, 28.

Karen Bloom and John Huber, parents of Anthony Huber, said there was "no justice" in the verdict.

They said in a statement: "It sends the unacceptable message that armed civilians can show up in any town, incite violence, and then use the danger they have created to justify shooting people in the street."

The verdict has divided Americans and the thorny issue of race hung over the case, although Rittenhouse and the men he shot were all white.

President Joe Biden, who in last year's election campaign tweeted a video that appeared to link Rittenhouse to white supremacists, said on Friday he supported the jury's decision.

But the Congressional Black Caucus said: "It is unconscionable our justice system would allow an armed vigilante… to go free."

Some black activists said on Friday the US police and courts would have treated the teenager more harshly if he had been black.

Conservatives saw the verdict as a validation of the US Constitution's Second Amendment, which grants Americans the right to bear arms.

US congressman Madison Cawthorn, a Republican representative from North Carolina, said on Instagram: "Kyle Rittenhouse is not guilty my friends.

"You have a right to defend yourselves. Be armed, be dangerous and be moral."

The defence argued that Rittenhouse had been repeatedly attacked and had shot the men in fear for his life.

It was said he was a civic-minded teenager who had been in Kenosha to protect private property after several nights of unrest in the city south of Milwaukee.

The prosecution portrayed Rittenhouse as a reckless vigilante who provoked the violent encounters and showed no remorse for the men he shot with his AR-15-style assault rifle.

Last year's protests and riots in Kenosha followed the police shooting of a black man named Jacob Blake who was armed with a knife and left paralyzed from the waist down.