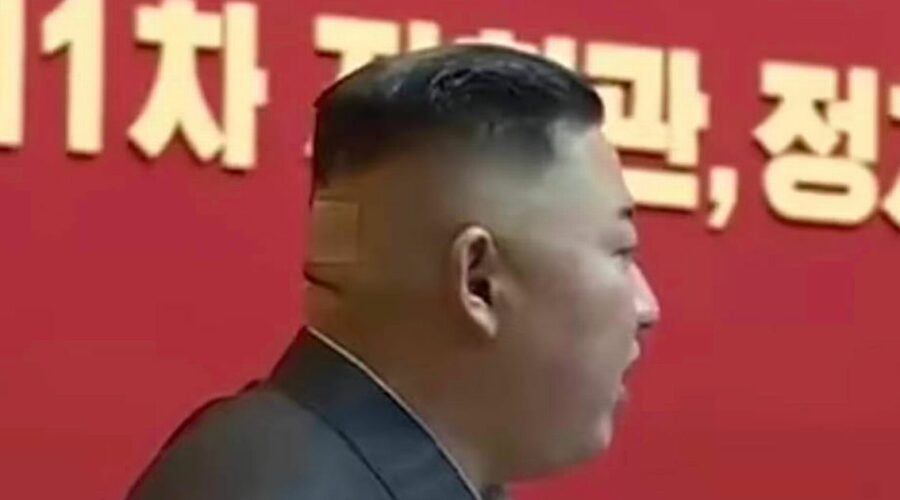 Questions about the North Korean despot Kim Jong Un's health have increased after the communist leader appeared in public with dark spots on the back of his head.

In photos taken of Jong Un last week, the dark markings on the back of his head are occasionally covered by a large nude coloured plaster or bandage.

The large, dark green spot or bruise can be seen on the rear right side of his head but there is no indication of what has caused it, reports NK News.

The peculiar markings and bandage follow concerns over the supreme leader's health after noticeable weight loss in his appearance.

At the end of June North Korean state media described Jong Un's appearance as "emaciated" in acknowledgement of his slimming frame.

The dark spots and plaster were first seen on the back of Jong Un's head at the end of July when he attended a number of events including a military parade between July 24-27.

The plasters and markings could be used in an attempt to gain sympathy from the public who will be concerned about their idol's health.

The 37-year-old's facial structure was noticeably more pronounced in recent weeks with indications the country is living under the cloud of a devastating famine.

There has also been no official confirmation from the regime regarding a positive Covid infection since the pandemic outbreak.

However many countries are sceptical of this and thousands of vaccines have been offered but rejected.

Get the latest stories and updates from around the world by signing up for the Daily Star News newsletter.

Kim Jong-Un's sister, Kim Yo-jong, has given a stark warning to the US and South Korea in recent days over their planned military drills later this month.

She has said North Korea will be watching closely to see if the annual "war exercises" take place and if they do they would damage North-South relations.

Yo-jong has warned not to hold the "aggressive" drills in a show of her rising power in the dictatorship.

She is known to be a trusted confidante of tubby tyrant Kim and her role on the political stage is growing.