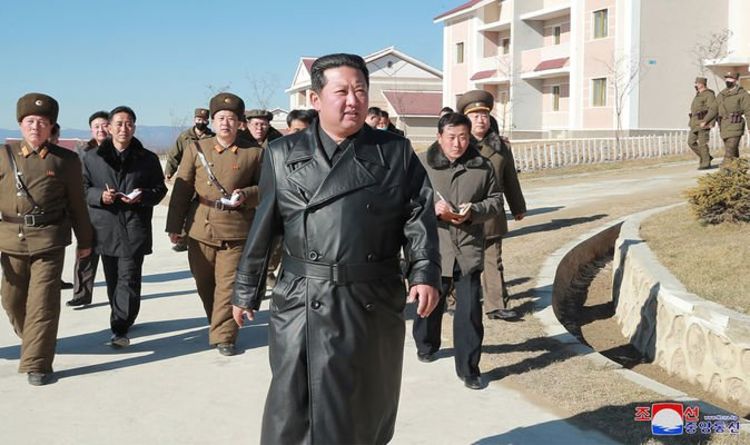 North Korea’s leader, Kim Jong-un, has been the subject of rumours surrounding his health recently. Mr Kim has been absent from public eyes since he gave a speech at a defence exhibition last month. However, state media reported on Tuesday he had visited the construction of a new city near the border with China.

North Korea’s Korean Central News Agency (KCNA) reported on Tuesday that Mr Kim made his first public appearance since the middle of September.

However, KCNA did not confirm the date the appearance took place.

Mr Kim was pictured visiting the construction of a new city – labelled a “socialist utopia” by state officials.

The city is being built near the country’s border with China and a sacred mountain which is well regarded by the Kim family.

Samjiyon, a northern alpine town, is currently being transformed into a huge economic hub that will include new apartments, hotels, a ski resort and commercial, cultural and medical facilities.

Once complete the city will lie in the shadow of Mount Paektu, the holy mountain where Mr Kim’s family claim their roots.

The city is one of Pyongyang’s largest initiatives that were launched as part of Mr Kim’s plans for a self-reliant economy.

The proposals have gained pace as North Korea faces up to international sanctions over its nuclear and missile programmes.

Since 2018 Mr Kim has made numerous visits to the site, which KCNA have described as “an example of a mountainous modern city under socialism”.

KCNA said: “He said Samjiyon has turned into an example of a mountainous modern city under socialism and a standard of rural development thanks to the workers’ steadfast struggle despite the unfavourable northern environment.”

Why was Kim Jong-un absent for so long?

No official explanation has been given by North Korea for Mr Kim’s absence.

His disappearances, from state media, in the past have often triggered rumours about his health and whereabouts.

His absence led to speculation that he was recovering from heart surgery, had contracted Covid or may even have passed away.

Nonetheless, the North Korean leader eventually resurfaced in state media reports which put an end to rumours of ill health.

16/11/2021 World News Comments Off on Kim Jong-un health: North Korean leader appears after health concern – where has he been?
Markets