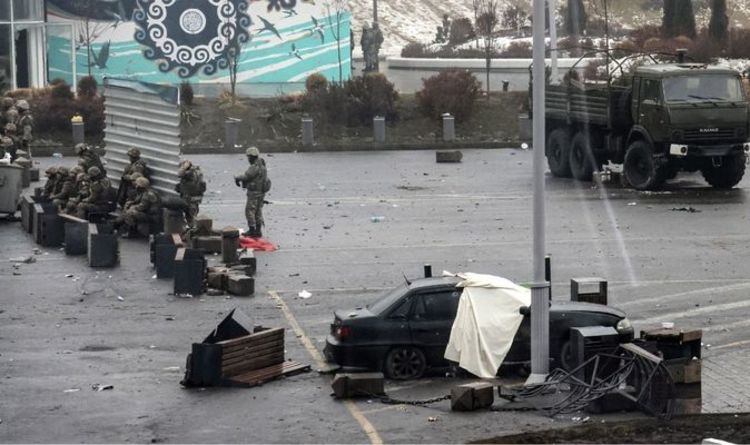 Mass protests across Kazakhstan are facing a brutal crackdown as president Kassym-Jomart Tokayev fights to take back his steely rule of the country. In recent days Kazakhstan, a former Soviet republic, has called on its neighbour and ally Russia to intervene.

What sparked the protests in Kazakhstan?

On January 1, the government announced a huge hike in fuel prices and this sparked widespread violent protests across the country.

In a bid to stop the protests which were quickly surging out of control, the government resigned.

The president then declared a two-week state of emergency.

The internet was shut off and mobile reception blackouts were imposed across much of the country.

Protests started in the west of the country and they quickly turned violent and spread across the country.

Initially, these were triggered by the hike in fuel prices, but pent up anger at the government’s corruption, inequality and the crippling poverty most citizens face triggered a more general protest and demand for change.

Protestors are angry with their leader Mr Tokayev and his predecessor Nursultan Nazarbayev, who still has a huge influence.

The protestors are demanding better standards of living and reform of their corrupt system of government.

Why is Russia getting involved?

Mr Tokayev asked for help from its long-term ally Russia to put down the protests.

Kazakhstan is part of the Collective Security Treaty Organization (CSTO) which is made up of former Soviet Union states, with Russia, Armenia, Belarus, Kazakhstan, Kyrgyzstan and Tajikistan all part of this organisation.

But Mr Tokayev has labelled many of the protestors as “terrorists” in a thinly veiled attempt to justify his brutal crackdown and his drafting in of Russian troops.

What is the situation in Kazakhstan now?

It’s hard to know the exact situation on the ground, as internet and mobile blackouts have caused a breakdown in communication with the outside world.

Alarmingly the latest news is pretty bleak, as Mr Tokayev has redoubled his lethal tactics to subdue protestors.

On January 8, the president ordered security forces to “shoot to kill without warning.”

He has justified the order by claiming that up to 20,000 “bandits” attacked the country’s financial capital Almaty and had destroyed state property.

Appearing on state television to address the nation, the president said: “Those who don’t surrender will be eliminated.”

But the protestors seem more determined than ever, so even with Russian interference, these protests appear far from over.

09/01/2022 World News Comments Off on Kazakhstan conflict explained: What sparked the protests?
Markets