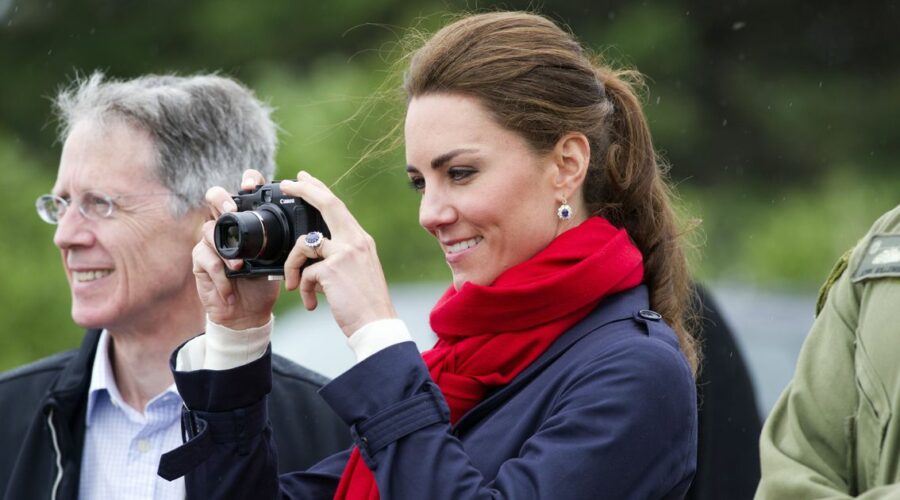 Kate Middleton has revealed that her children ask her to "please stop taking photographs".

The Duchess of Cambridge, who is a keen photographer, admitted that Prince George, Louis, and Princess Charlotte are sometimes reluctant to let her take a snap of them.

She confessed during a conversation with a finalist of her Hold Still photography contest.

Kate was discussing an emotional picture taken by Ceri Edwards, which showed her daughter Poppy hugging her dad Mark before his shift as a paramedic in Newport, South Wales.

The mum-of-three praised the black and white image, saying it had "strength, courage, and resilience."

During the phone call, which was posted on the Duke and Duchess of Cambridge's YouTube channel, Kate and Ceri spoke about photography.

The duchess asked if Ceri's husband was a photographer, to which she said: "No. Well, Mark would say otherwise just because I do take a lot of pictures of the family."

Ceri responded: "I know, but I love it. I love looking back. I think when you have children, time seems to go into warp speed, really, and it's just a lovely thing for me. You look back and see how much the children have grown."

The Hold Still project encouraged the public to document life through photographs during the pandemic. It has since been turned into an exhibition and book.

Kate, 39, often shares adorable photos of her and Prince William's children with fans.

She also snapped the first official photo of Princess Charlotte, which shows little George holding his younger sister as a toddler.

The duchess took the photos in their family home, allowing the family to give them a personal touch and freedom.

To celebrate Charlotte turning six months, she also shared a sweet photo of the baby sitting on a chair wearing a floral dress and pink cardigan.

When Prince Louis was born, Kate again released official photos she had taken herself and shared another snap of Charlotte kissing him on the head.

The royal likes to post updates on important milestones of her children on social media for fans across the world, including their first day at nursery or school.

Followers across the world share their joy at the pictures and get a further glimpse of what life is like for the Cambridge family.