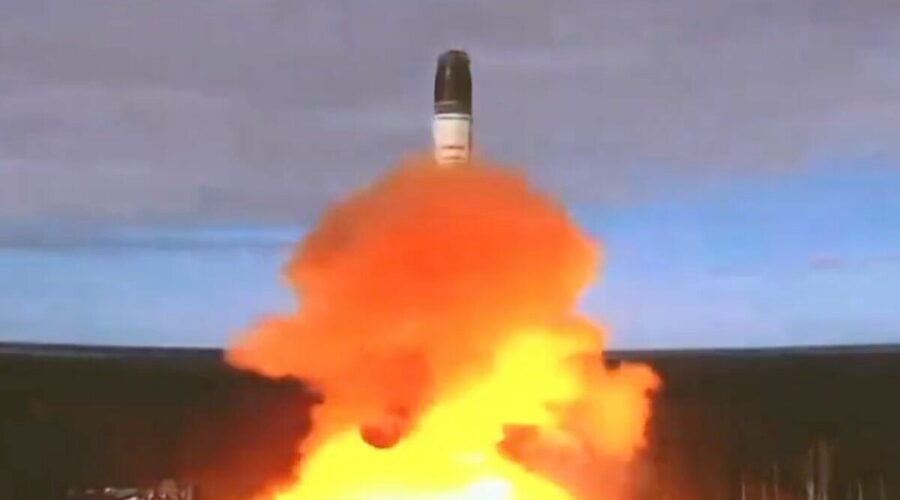 Russia: Philip Ingram discusses if Putin would use nuclear tactics

The Foreign Secretary delivered a rousing and stirring speech on Wednesday last week, as she outlined the UK’s determination to defeat Putin in Ukraine. The Tory MP told an audience at Mansion House in London that the British Government has set its sights on driving the Russian despot out of the whole of Ukraine. Her comments come in the wake of provocative remarks made by the US Defence Secretary after a recent visit to Kyiv.

Lloyd Austin told reporters that the US wanted to “weaken” Russia so that it would never be able to launch similar wars in the future.

The ratcheting up of rhetoric by Western politicians and officials has enraged Russia’s leader and his supporters.

Now Putin has hit back by warning the Foreign Secretary and her Cabinet that the UK is firmly in Russia’s nuclear crosshairs.

Sergey Mironov, leader of the Just Russia faction in the Duma, told fellow MPs that Liz Truss was playing with fire.

In a speech dripping with scorn, he said: “Someone tell Liz that one Sarmat missile is enough to wipe out the islands of Britain.”

“Maybe she just doesn’t get it,” he added.

The Foreign Secretary became a figure of fun in Russia after a making a couple of embarrassing gaffes during a meeting with her Kremlin counterpart, Sergey Lavrov.

During a February pre-war meeting with Lavrov, she was asked by her host whether she recognised Russian sovereignty over Rostov and Voronezh oblasts.

The two regions are in the south of Russia and were the focus of a Russian military build-up prior to Putin’s invasion.

Ms Truss replied Britain would never recognise them as Russian, before being corrected by the UK ambassador.

He said: “They have already warned about possible strikes against decision making centres in Moscow.

“But we see that decisions are not made in Kyiv, where only pitiful puppets sit.

“Decisions are made in London, Washington and Bonn [sic.], where they are getting ready to deliver heavy weaponry to the ‘banderites’.”

The term “banderites” is an offhand Russian way of calling Ukrainians fascists.

The word refers to Stepan Bandera, a Ukrainian extreme right-wing politician from the 1930s and a Nazi collaborator.

The Russian politician warned Western leaders that they could not hide behind Ukraine in their war against Russia and would have to face the consequences.

He concluded: “And you thought it was possible to destroy us through someone else’s hands and watch from the sides from a safe distance?

“That’s not going to happen, gentlemen. You will have to pay for everything in full yourselves.”

Russian experts have become increasingly concerned about the Kremlin’s threats to use nuclear weapons.

Commenting on Mironov’s speech, Dmitry Kolezev, an journalist and editor of the independent Russian news website Republic.ru, tweeted: “Pro-Kremlin speakers were clearly given the go-ahead to threaten nuclear war.