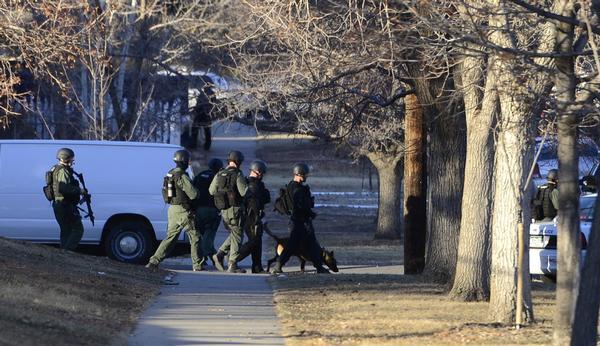 A jury awarded a Denver man more than $2.5 million in damages after concluding a police officer used excessive force in 2013 when he shot the man in the back while the man was lying facedown on the ground with his hands on his head.

The jury awarded the damages to Michael Valdez late last month after a nine-day jury trial in the U.S. District Court of Colorado. Valdez filed the lawsuit against the city of Denver and five individual police officers in 2015, two years after the shooting that left Valdez with an amputated finger, injuries to his bowels and multiple fractures in his back.

Valdez’s attorneys later focused the lawsuit on one officer — Sgt. Robert Motyka — and dismissed the claims against the other Denver officers. The jury found that Motyka’s excessive force violated Valdez’s constitutional rights and that the city failed to properly train Motyka.

“Officer training is taken seriously in Denver,” Jacqlin Davis, a spokeswoman for the Denver City Attorney’s Office, said in a statement. “The city is still reviewing the case to determine its next legal steps.”

Davis noted in her statement that Motyka could not participate in the first week of trial due to “COVID restrictions” but did not elaborate when asked to provide more details. Court records show Motyka tested positive for COVID-19 on Sept. 8 and that the judge declined to reschedule the trial that began Sept. 13.

The jurors in their Sept. 23 verdict awarded $131,000 in damages against Motyka and $2.4 million against Denver. Davis also did not answer questions about whether the city would pay the damages against Motyka, who was sued as an individual and represented by the city’s attorneys throughout the case.

Valdez on Jan. 16, 2013, accepted a ride from a friend without knowing that the friend and the red truck he was driving were wanted by Denver police, the lawsuit states. Valdez was in the truck with his friend and three others when police began to pursue the truck. Police said that the people inside the truck fired at pursuing officers.

Valdez was a helpless victim during the chase and had no part in the alleged crime for which his friend was wanted, according to the lawsuit.

The driver crashed the truck and Valdez exited the vehicle with his hands in the air a few minutes after the crash. He laid down on the ground with his arms extended, but moved his hands to his head when gunfire began. One of the people in the truck fired at officers, injuring Motyka, and officers returned fired. One of the people in the truck, John Montoya, was shot and killed by police.

Motyka shot Valdez in his back during the shootout and an unidentified officer shot him in the finger. When the lawsuit was filed two years later, Valdez still struggled to walk and endured constant pain.

Denver prosecutors charged Valdez with several felonies — including attempted first-degree murder — in connection to the incident, despite the fact that Valdez never possessed a weapon. Valdez could not post bail and was held in jail for more than two months “in agonizing pain and without the use of his lower limbs” until prosecutors dismissed all charges against him, the lawsuit states.

Police first described the incident as a rampage and said that all occupants in the truck “displayed a propensity for violence.” The Denver Police Foundation in 2015 awarded Motyka and the other officers on scene with commendations for their actions in the shooting. Motyka was awarded the Denver Police Department’s Medal of Honor.

Valdez’s attorneys in their lawsuit pointed to a previous incident involving Motyka as evidence that the city failed to train or discipline its officers.

Motyka and three other Denver police officers were sued in 2011 for entering a home and wrongly arresting innocent people whom they incorrectly believed to be drug dealers. The alleged dealers had previously moved from the rental home and the people the officers arrested were the new tenants. A jury awarded the family $1.8 million in that case.

“Denver’s failure to properly hire, train, supervise and discipline its officers was a moving force of the constitutional violations alleged herein and was a direct and proximate cause of Mr. Valdez’s injuries,” the lawsuit filed by Valdez states. “As a direct result of Defendants’ actions, Mr. Valdez suffered humiliation, emotional distress, loss of enjoyment of life, and other significant injuries, damages and losses.”