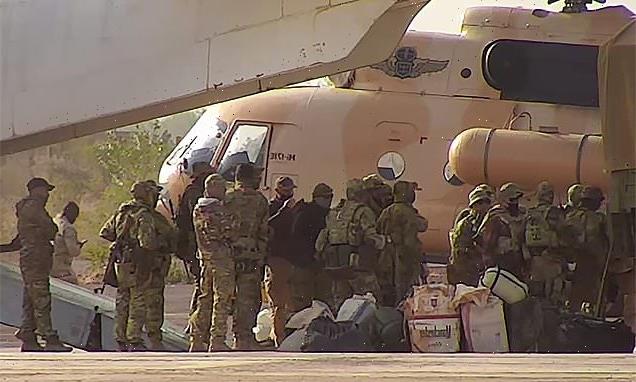 A jihadist group fighting against the military junta in Mali claims to have captured a soldier from the shady Russian military group Wagner.

Militants from the Group for the Support of Islam and Muslims (JNIM) said today that they captured the Wagner fighter during a battle in Ségou state, in the south of the country, earlier this month.

The mercenary was captured just a week after Wagner troops, alongside regular Malian soldiers, were accused of massacring up to 300 civilians during a four-day siege of the town of Mora, some 120 miles north of where the prisoner was taken.

Wagner is a private military company with links to the Kremlin which is accused of carrying out atrocities with the blessing of the Russian state, but without directly implicating Putin. Thousands of its men are thought to be fighting in Ukraine. 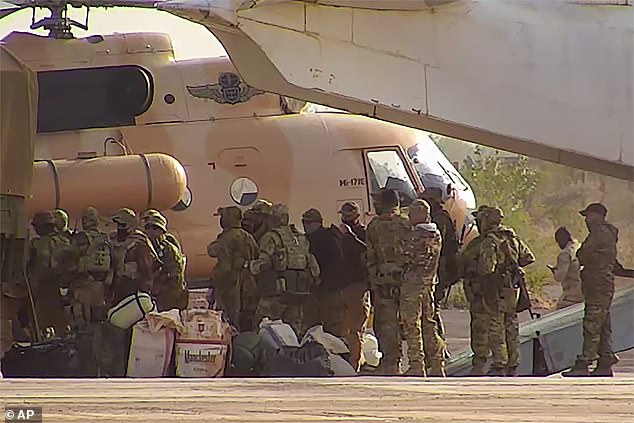 Jihadists fighting the military junta in Mali claim to have captured a soldier from shady Russian mercenary unit Wagner (pictured, Wagner troops in Mali on an unknown date)

‘In the first week of April, (we) captured a soldier of the Russian Wagner forces in the Segou region in central Mali,’ the JNIM said in a statement posted on social media.

It is the first time JNIM, an Al-Qaeda-linked alliance and the biggest jihadist network in the Sahel region of northern Africa, has announced the capture of a fighter with the Wagner group.

Wagner troops are thought to have arrived in Mali in December 2021 by invitation of the ruling military junta which had recently fallen out with France.

Emmanuel Macron’s government had been sending troops to help defend the country – one of its former colonies – since 2013.

Mali officially denies the presence of the Wagner group, saying that the only Russian troops present in the region are military instructors.

Putin has acknowledged the presence of Russian military contractors in Mali, and denied that they were sent by his government – following a familiar pattern when it comes to the group.

While no official numbers exist, western nations believe there are now more than 1,000 Wagner mercenaries fighting alongside the government in Mali.

Wagner soldiers have previously been linked to extrajudicial killings, torture and rapes in war zones from the Middle East to South America and Africa.

The group has stepped up its presence in Mali since the French government announced it was withdrawing the last of its troops from the country in February.

Relations with the military junta – which seized power in a 2021 coup – had become fraught after Macron accused its leader of having ‘no legitimacy’.

Just two days ago, France accused Wager soldiers of staging a fake burial at a military base in the north of the country which its troops had recently handed over to Malian forcers.

The French military said social media accounts linked to Wagner had posted videos which showed soldiers burying bodies in a pit at the base, while blaming French troops for carrying out the killings.

France said such allegations are untrue, and that Wagner staged the video as part of a disinformation effort to turn public opinion against them.

Mali is a hugely unstable country in northwestern Africa that has seen three military coups take place in the last ten years – including two that took place in nine months between 2020 and 2021.

The pair were arrested and sent to a military base as Goïta – who had led the 2020 coup – announced he would oversee a transitional government until fresh elections could be held this year.

No such elections have taken place and Goïta has not announced plans for any, drawing international condemnation and regional sanctions. 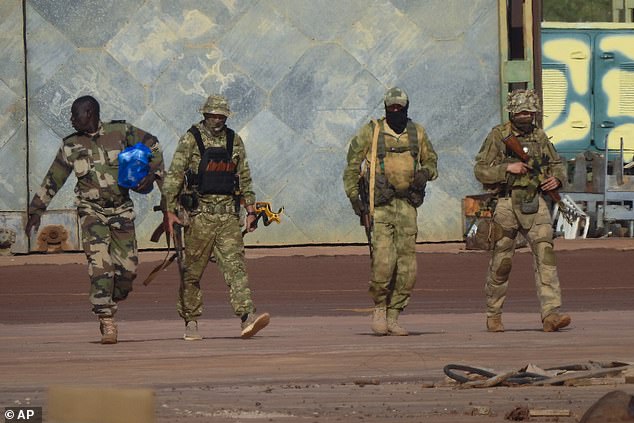 Malian troops (pictured) have been fighting a years-long insurgency against the al-Qaeda linked group JNIM, which claimed to have captured the mercenary