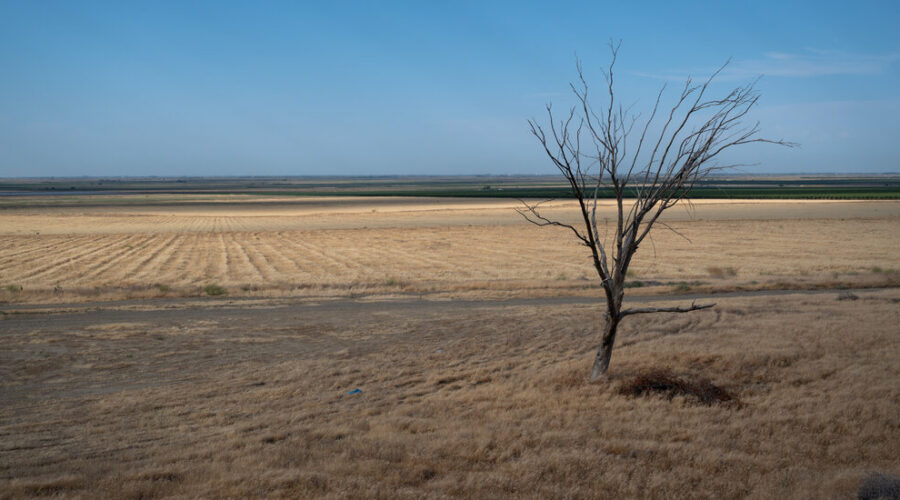 ORDBEND, Calif. — In America’s fruit and nut basket, water is now the most precious crop of all.

It explains why, amid a historic drought parching much of the American West, a grower of premium sushi rice has concluded that it makes better business sense to sell the water he would have used to grow rice than to actually grow rice. Or why a melon farmer has left a third of his fields fallow. Or why a large landholder further south is thinking of planting a solar array on his fields rather than the thirsty almonds that delivered steady profit for years.

“You want to sit there and say, ‘We want to monetize the water?” No, we don’t,” said Seth Fiack, a rice grower here in Ordbend, on the banks of the Sacramento River, who this year sowed virtually no rice and instead sold his unused water for desperate farmers further south. “It’s not what we prefer to do, but it’s what we kind of need to, have to.”

These are among the signs of a huge transformation up and down California’s Central Valley, the country’s most lucrative agricultural belt, as it confronts both an exceptional drought and the consequences of years of pumping far too much water out of its aquifers. Across the state, reservoir levels are dropping and electric grids are at risk if hydroelectric dams don’t get enough water to produce power. 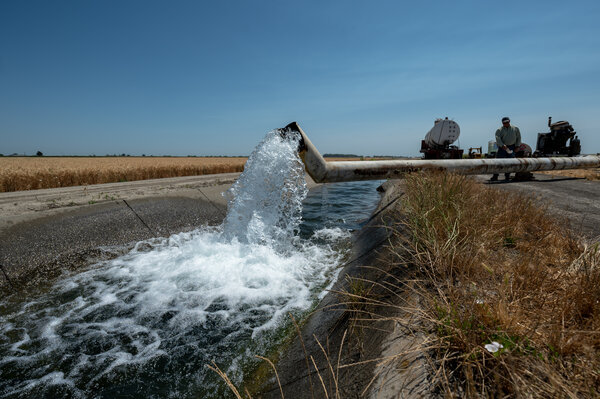 Climate change is supercharging the scarcity. Rising temperatures dry out the soil, which in turn can worsen heat waves. This week, temperatures in parts of California and the Pacific Northwest have been shattering records.

By 2040, the San Joaquin Valley is projected to lose at least 535,000 acres of agricultural production. That’s more than a tenth of the area farmed.

And if the drought perseveres and no new water can be found, nearly double that amount of land is projected to go idle, with potentially dire consequences for the nation’s food supply. California’s $50 billion agricultural sector supplies two-thirds of the country’s fruits and nuts and more than a third of America’s vegetables — the tomatoes, pistachios, grapes and strawberries and that line grocery store shelves from coast to coast.

Glimpses of that future are evident now. Vast stretches of land are fallow because there’s no water. New calculations are being made about what crops to grow, how much, where. Millions of dollars are being spent on replenishing the aquifer that has bee depleted for so long.

“Each time we have a drought you’re seeing a little glimpse into what will happen more frequently in our climate future,” said Morgan Levy, a professor specializing in water science and policy at the University of California, San Diego.

For Rice Farmers, a Tricky Decision

California’s fertile Central Valley begins in the north, where the water begins. In normal times, winter rain and spring snowmelt swell the Sacramento River, nourishing one of the country’s most important rice belts. On an average year, growers around the Sacramento River produce 500,000 acres of sticky, medium-grain rice vital to sushi. Some 40 percent is exported to Asia.

But these are not normal times. There’s less snowpack, and, this year, much less water in the reservoirs and rivers that ultimately irrigate fields, provide spawning places for fish and supply drinking water for 39 million Californians.

That crisis presents rice farmers in the Sacramento Valley, which forms the northern part of the Central Valley, with a tricky choice: Should they plant rice with what water they have, or save themselves the toil and stress and sell their water instead?

Mr. Fiack, a second-generation rice farmer, chose to sell almost all of it.

His one 30-acre field of rice glistens green in the June sunshine, guzzling water that pours out of a wide-mouthed spigot. His remaining 500 acres are bare and brown. What water he would have used to grow rice he has signed away for sale to growers of thirsty crops hundreds of miles south, where water is even more scarce.

At $575 per acre-foot (a volume of water one acre in size, one foot deep) the revenue compares favorably to what he would have made growing rice — without the headaches. It makes “economic sense,” Mr. Fiack said flatly.

Rice is far less lucrative than, say, almonds and walnuts, which is why Mr. Fiack’s fields are surrounded by nut trees and even he is dabbling in walnuts. But rice farmers are uniquely advantaged. Because their lands have been in production for so long, they tend to have first dibs on water that comes out of the Sacramento River, before it is channeled through canals and tunnels down south.

Also, unlike the owners of fruit and nut trees, whose investments would wither in a few weeks without water, rice farmers can leave a field fallow for a year, even two. In the era of climate change, when water can be unreliable, that flexibility is an asset. Rice water transfers have been an important part of California’s drought coping strategy.

This year, rice farmers in the Sacramento Valley will produce around 20 percent less rice.

Not everyone is enthusiastic about that.

Kim Gallagher, a third-generation rice farmer, left fallow only 15 percent of her fields. She worries about the effect on the rice mills and crop-duster pilots who live off rice farming, not to mention the birds that come to winter in the flooded fields. “These are trade-offs every farmer has to make, what they can fallow and what they can’t,” she said. “Everyone has a different number.”

Fritz Durst, a fourth-generation rice farmer, worries that California rice buyers would come to see his region as an unreliable supplier.

He, too, hedged his bets. He is growing rice on about 60 percent of his 527 acres, which enables him to sell the Sacramento River water he would have used on the rest.

But there’s a long-term risk, as he sees it, in selling too much water, too often. “You also have people here who are concerned that we’re setting a dangerous precedent,” he said. “If we start allowing our water to go south of the Delta, those people are going to say, ‘Well, you don’t need that water. It’s ours now.’”

Federico Barajas is in the unenviable position of having to find water. As the manager of the San Luis and Delta-Mendota Water Authority, he has negotiated a deal to buy from water districts like Mr. Durst’s.

There’s just one problem: Because the rivers are so hot and dry this year, the federal government, which runs the Shasta Dam, where cold Sacramento River water is stored, has said the water needs to stay in the reservoir through the summer months for another source of food: fish that hatch in California’s rivers.

He’s not accepting defeat. “We’re still looking for anybody out there who has any drop of water we can purchase and transfer,” he said gamely.

Nearby, off Interstate 5, Joe Del Bosque had been counting on that rice water from the north. It’s how he’s survived the droughts of the past, he said. “This is the worst year we’ve had,” Mr. Del Bosque said.

Mr. Del Bosque grew up working on melon farms with his farmworker father. Today, Mr. Del Bosque owns a melon farm near the town of Firebaugh. He grows organic cantaloupes and watermelons on most of his 2,000 acres, destined for supermarket shelves nationwide. The license plate on his GMC truck reads “MELONS.”

This year, he’s left a third of his land fallow. There’s just not enough water. He had planted asparagus on a few fields, too, only to pull it out. A neighbor pulled out his almonds.

The hot, dry San Joaquin Valley became cotton farms at the turn of the 20th century, at the time with water flowing from the north through fields of alfalfa and then strawberries and grapes. Almonds took over as prices soared. And with more demands on the surface water flowing through the river — to maintain river flows, for instance, or flush seawater out of the California Delta — farmers turned increasingly to the water under their land.

It provides 40 percent of the water for California agriculture in a normal year, and far more in dry years. In parts of the state, chiefly in the San Joaquin Valley, at the southern end of the Central Valley, more groundwater is taken out than nature can replenish.

“There’s just no way around that,” said Eric Limas, the son of farmers who now manages one of the most depleted irrigated districts, called Pixley, a checkerboard of almond orchards and dairies. “The numbers just don’t add up.”

So thoroughly have aquifers been depleted that farmers are now investing millions of dollars to put water back into the ground They’re buying land that can absorb the rains. They’re creating ponds and ditches, carving up the landscape, again, to restore the groundwater squandered for so long.

“That is the single biggest water system adaptation we can do — getting more water into the ground,” said Ellen Hanak, director of the water policy center at the Public Policy Institute of California.

Meanwhile, towns in the Central Valley are beginning to run out of municipal water, including Teviston, just south of Mr. Limas’s office, where town officials have been delivering bottled water to 1,200 residents for nearly two weeks.

From Almond Trees to Solar Arrays

Mr. Woolf took over his father’s farm, headquartered in Huron, in 1986, retired most of the cotton his dad grew, switched to tomatoes, bought a factory that turns his tomatoes into tomato paste for ketchup. His operations expanded across 25,000 acres. Its highest value crop: almonds.

Mr. Woolf now sees the next change coming. The rice water from the north won’t come when he needs it. The groundwater restrictions will soon limit his ability to pump.

He has ripped out 400 acres of almonds. He’s not sure he will replant them anytime soon. In the coming years, he estimates he will stop growing on 30 to 40 percent of his land.

He has left one field bare to serve as a pond to recharge the aquifer, bought land in the north, where the water is, close to Mr. Fiack’s rice fields. Now, he is considering replacing some of his crops with another source of revenue altogether: a solar farm, from which he can harvest energy to sell back to the grid.

“Look, I’m a farmer in California. The tools we had to manage drought are getting limited,” he said. “I’ve got to fallow a lot of my ranch.”

28/06/2021 World News Comments Off on It’s Some of America’s Richest Farmland. But What Is It Without Water?
Markets