Truck driver William used to endure excruciating pain from arthritis and scoliosis rather than take opioids to relieve it and running the risk of nodding off behind the wheel.

The 37-year-old father’s untreated conditions left him moody and his marriage was suffering until his wife, Kristal, insisted he see a doctor, who prescribed him with medicinal cannabis. 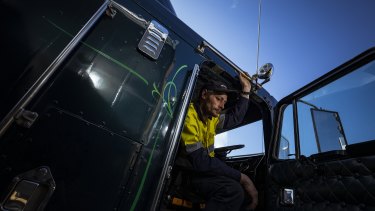 Truck driver William was charged with drug driving last year after driving with medicinal cannabis in his system.Credit:Chris Hopkins

His life turned around as his pain and insomnia subsided.

But this all changed in June last year when William – who asked that his surname not be published – was charged with drug driving after returning a positive result for prescribed tetrahydrocannabinol (THC) during a trip to the shops where he lives in rural Victoria.

“It’s discriminating against me because I can’t take the medication that works. Now, I’ve got to go to opioids that have really bad side effects.”

Prescribed medicinal cannabis has been legal in Victoria since 2015, but it remains an offence for drivers to have the drug in their systems.

However, this could soon change after a new study found road safety risks with the drug were similar or lower than many other potentially impairing prescription medications, such as opioids, benzodiazepines and antidepressants.

Users of these and other prescription drugs are permitted to drive as long as they are not impaired in Victoria. If they are responsible for a car crash while taking their medication as prescribed it is a defence under legislation.

Meanwhile, there is a zero-tolerance approach to medicinal cannabis, without accounting for whether they are impaired or not. 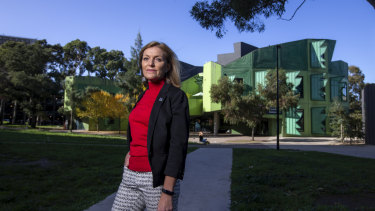 Roadside tests can pick up traces of the drug weeks after consumption, while impairment can last as little as three hours.

Policy analysis by researchers from the Office of Medicinal Cannabis at the Victorian Department of Health and tertiary institutions including the University of Melbourne and University of Sydney concluded there was little evidence to justify treating medicinal cannabis patients differently.

“It was also quite clear that there are harms associated with patients not being able to access the medication,” lead researcher Daniel Perkins said.

Mr Perkins said Australia was out of step with all other counties that have prescription only medicinal cannabis, including the UK, New Zealand, Ireland and Germany, which have policies that allow patients to drive when not impaired.

The study resulted from a government working group considering changing medicinal cannabis-driving laws after Reason Party MP Fiona Patten proposed a change to the Road Safety Act 1986 to allow people who have been prescribed the drug to drive as long as they can do so safely.

William said he wasn’t impaired seven hours after taking a low dose of medicinal cannabis and that the officers who charged him agreed.

He is now fighting the charge in court, with the help of pro bono lawyers David Heilpern, Greg Barns and Mat Henderson, and faces a conviction and licence suspension.

Ms Patten said William was one of many chronic pain or cancer sufferers who were forced to take other prescription drugs that were less effective or more dangerous to take while driving.

“I had a commitment from the government, that they would work out how do we ensure that medicinal cannabis patients were not unfairly discriminated against,” she said.

“What this paper shows is there’s no evidence to suggest that allowing additional cannabis patients to drive when they are not impaired will have any impact on road accidents.”

Victoria Police strongly opposes any changes to the act.

In a statement, the force said there was significant evidence of a link between the presence of THC in a driver’s system and road trauma.

“The law makes it clear that it is an offence to drive or be in charge of a motor vehicle with any concentration of a prescribed drug (one of which is THC),” the statement said.

A government spokeswoman said it was considering the working group’s report and would have more to say in due course.