London: Prime Minister Boris Johnson is boosting spending on defence by an extra £16.5 billion ($30 billion) over the next four years, in what he says amounts to Britain's biggest investment in the military since the Cold War.

He said the military needed to be modernised to deal with the changed face of modern warfare, which he said had previously been confined to "distant battlefields" but was now being waged "in the pockets" of ordinary citizens via the mobile phones or computers at home.

"I have taken this decision in the teeth of the pandemic because the defence of the realm must come first," Johnson said. 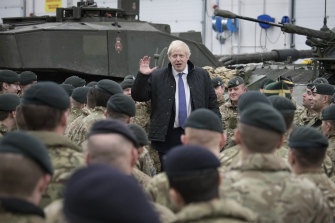 "The international situation is more perilous and more intensely competitive than at any time since the Cold War and Britain must be true to our history and stand alongside our allies.

"To achieve this we need to upgrade our capabilities across the board.

"This is our chance to end the era of retreat, transform our Armed Forces, bolster our global influence, unite and level up our country, pioneer new technology and defend our people and way of life."

The new funding will be partly spent on a new agency dedicated to artificial intelligence as well as the creation of a national cyber force and new space command. That latter should be capable of launching its first rocket by 2022. 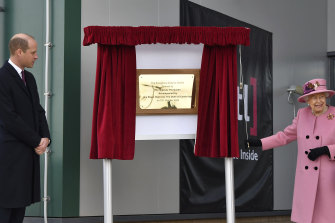 Prince William looks on as the Queen unveils a plaque to officially open the new Energetics Analysis Centre at the Defence Science and Technology Laboratory in England, last month. It houses a display of weaponry and tactics used in counter intelligence.Credit:AP

Alan Mendoza from the Henry Jackson Society, a hawkish think tank, said the boost was recognition the government considered its foes to be growing more dangerous.

"With China and Russia on the march, this investment will deliver on keeping the UK secure," Mendoza said.

He warned that the Ministry of Defence must spend its extra funding wisely to warrant the investment, amid concerns it has overspent on procuring new equipment in the past.

Johnson will formally announce the extra spending in a statement to the Commons on Thursday, London time, although he will have to deliver it virtually as he is self-isolating in his Downing Street flat after coming into contact with a Tory MP who tested positive for COVID-19.

The Conservatives have already promised to spend 2 per cent of the country's GDP, as well as increase the defence budget by 0.5 per cent above inflation, taking the forecasted defence budget to £24.1 billion, more than $10 billion per year for the next four years.

Number 10 said this would make the UK the highest spender on defence in Europe and the second-largest in NATO behind the United States. Outgoing US President Donald Trump had repeatedly complained the US disproportionately funded NATO and has pressured European allies, including Britain to boost their commitments.

But the government has been under pressure from hawks within it to commit to an increased spend as part of its integrated review into the Defence Force. 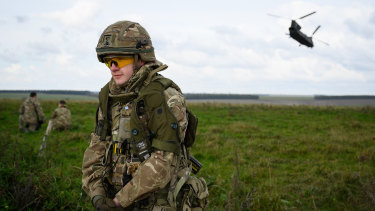 A British soldier takes part in the UK Task Group Mission Rehearsal Exercise ahead of their deployment to Mali last month.Credit:Getty Images

That review is designed to look at whether Britain's defence, foreign policy and security strategies are aligned as it responds to new forms of warfare and hostility from countries like Russia, China and Iran.

However, the study has been repeatedly delayed and is now not due until next year.

Earlier on Wednesday Johnson did not deny that the UK could divert foreign aid to pay for the country’s domestic recovery from the coronavirus pandemic when asked by a Labour MP during Prime Minister's Questions.

Britain has already merged its aid department with the Foreign Office, a move that was widely seen as preparing the ground to raid the aid budget and divert it to trade, defence or Foreign Office priorities.

Unlike Australia, Britain’s aid budget is in enshrined in legislation and commits the country to spending 0.7 per cent of its gross national income on international development. The pledge was put into law by former Conservative prime minister David Cameron and praised as recently as last year by former Australian Labor prime minister Julia Gillard.

The Tory chairman of the Commons Defence Select Committee and former foreign office minister Tobais Ellwood told The Sydney Morning Herald and The Age that any move to tamper with the aid budget would be a mistake.

"Cutting our overseas aid commitment would herald an embarrassing start to our G7 presidency and efforts to promote a global Britain agenda," he said.

"A new era of global leadership dawns following [US President-elect] Joe Biden’s win and an opportunity to reboot Western resolve and confront growing instability – yet here we are, retreating from the global stage," he said.

History of BTCV. Why it Should Be on Your Watchlist?