CHINA may have finished second in the Olympic medal table at Tokyo 2020 – but it wasn't for lack of trying as its sporting machine puts gold and glory as the ultimate goal.

Being pipped by the US with 39 golds to 38 on the final weekend, China has a sprawling state-backed operation which puts young athletes through brutal training regiments to prepare them for the world stage. 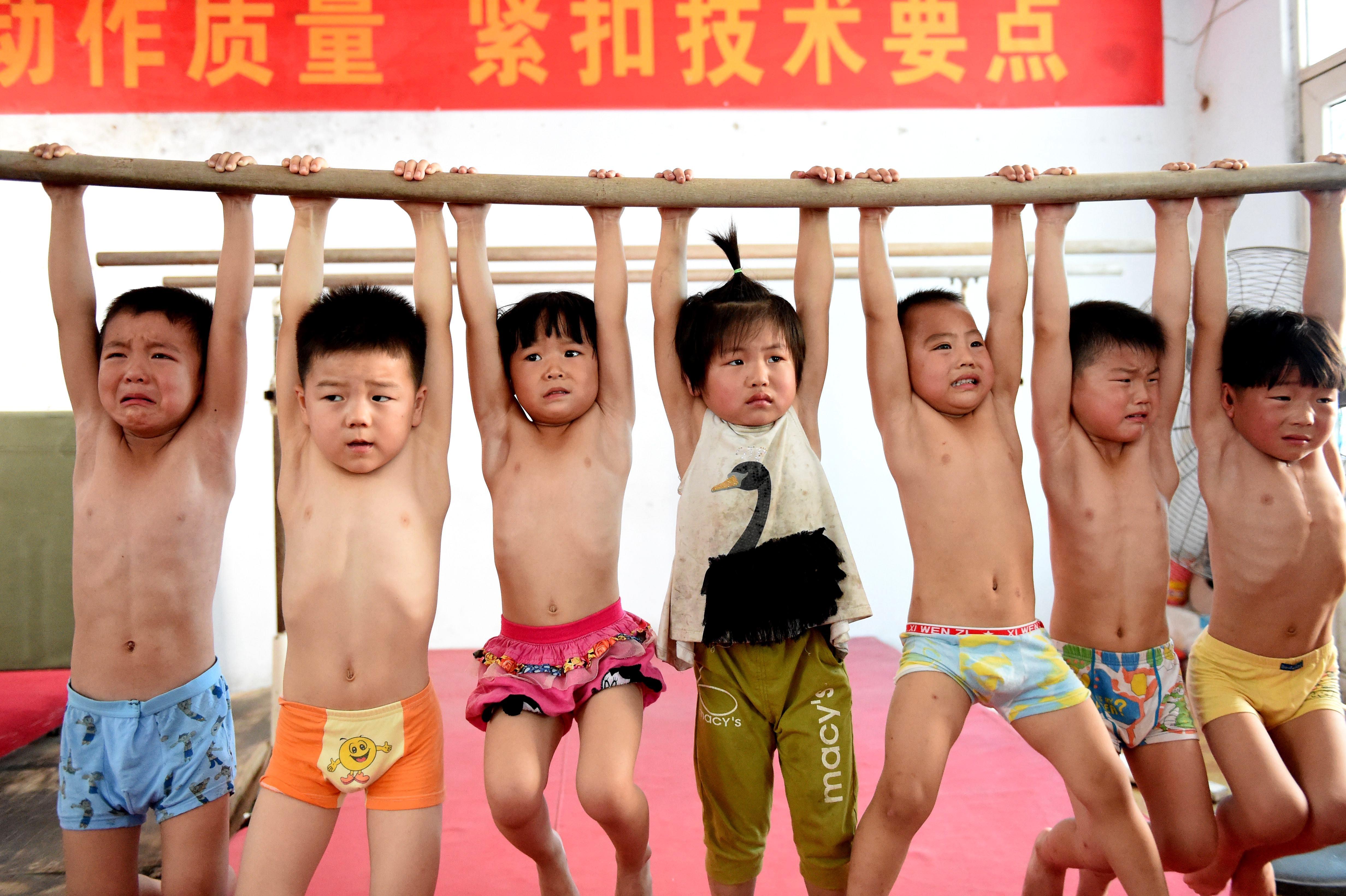 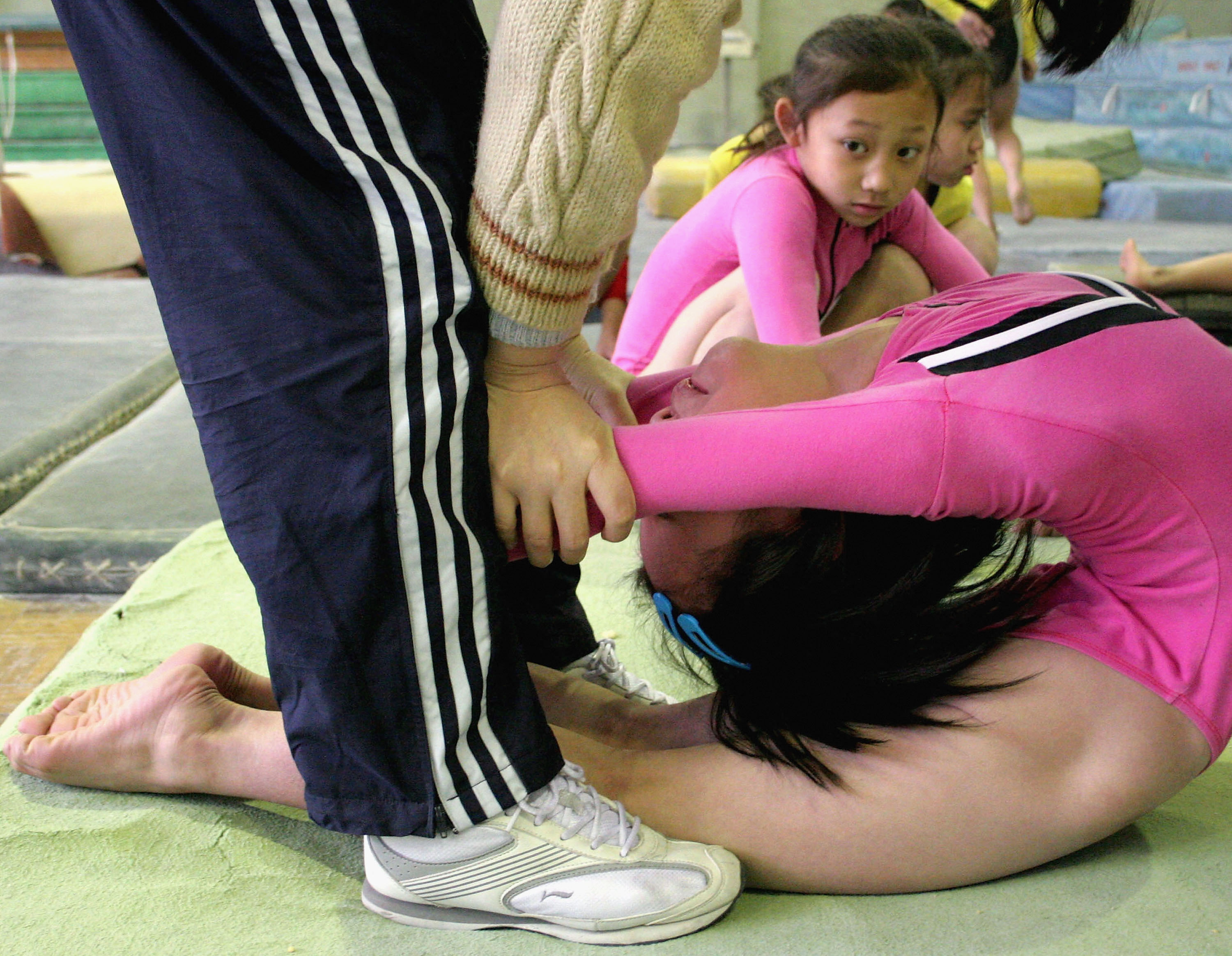 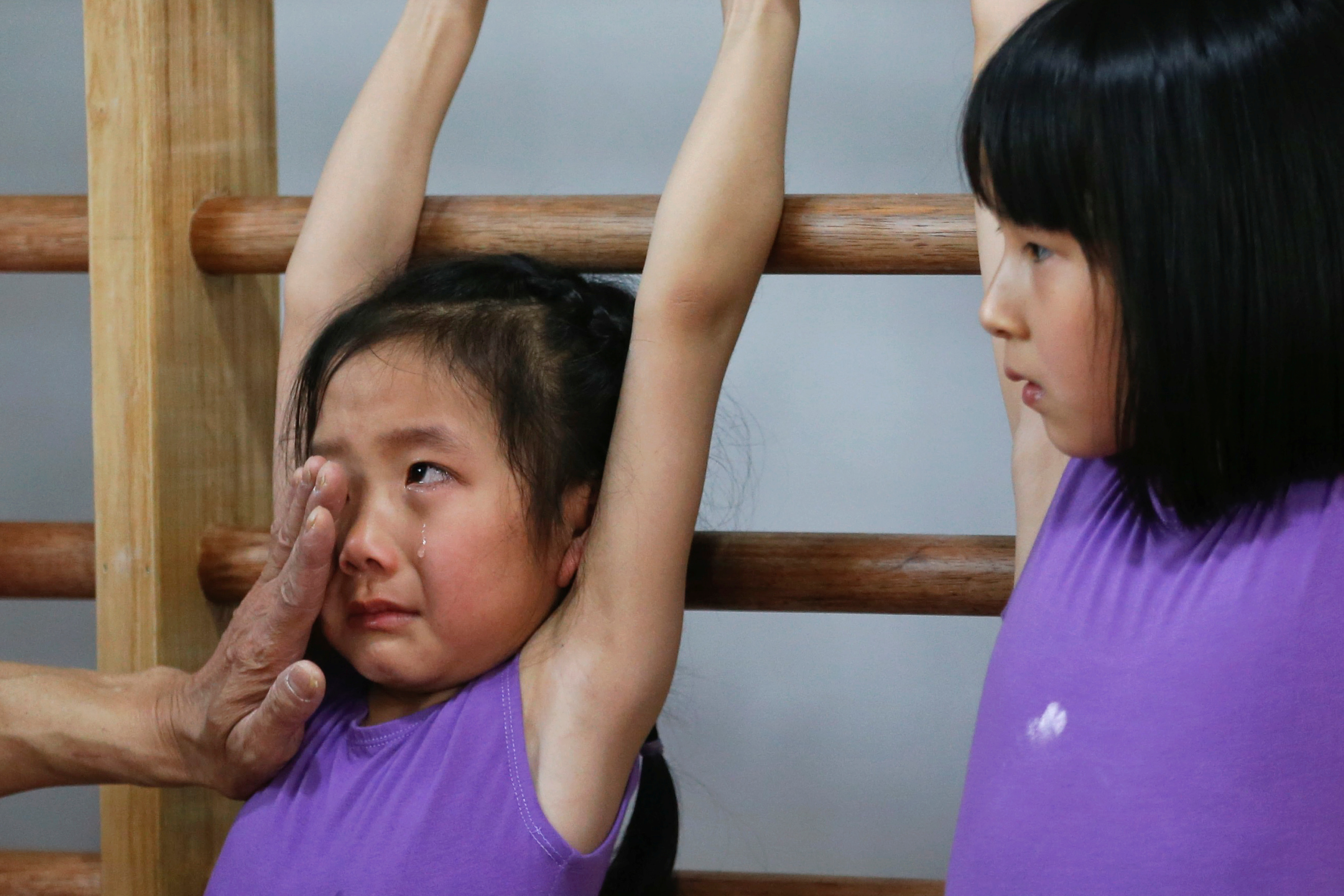 Combined with the country's sheer size -with a population of 1.4billion – it is this which propels the country to success at the Olympics.

Communist Party-backed sports officials ruthlessly select and train competitors from an early age – with children as young as four being enlisted to train for the team.

China's demanding state sports system has attracted criticism – but has also made it one of the most successful Olympic nations since it returned to the games in 1980.

The Chinese system is rooted in the Soviet model, which saw sport a way of attracting prestige for the Communist system.

Gou Zhongwen, director of China’s sports administration and head of the Chinese delegation, left no doubt about the country’s goals, saying on the eve of Tokyo "we must resolutely ensure we are first in gold medals".

The state sends out scouts to hunt for tens of thousands of children for full-time training at more than 2,000 government-run sports schools.

Tests for selection see kids being given challenges such as press-ups, endurance running and bench presses that prioritise overall strength over specific skills.

Many Chinese parents used to send their kids to sports schools, lured by government subsidies and promising-looking careers for their children.

It doesn't matter if the sports have mass appeal or if the youngsters have interest – if they are deemed worthy it is their duty to perform for the sake of the nation.

Disturbing pictures show children as young as four being trained at a Chinese gymnastics school.

In one heartbreaking picture, a girl can be seen sobbing as she dangles from bars while a coach stands in front of her wielding a stick.

Children from rural areas or from families that are not so good economically, they adapt well to the hardships

Another image shows a line of boys, most of them in tears, holding on to a bar at a gymnastics training centre.

At the Li Xiaoshuang Gymnastics School in there is little room for error, AFP reported.

They bow to their coaches in apology if they are not up to scratch, and a bad performance is punished with extra weight training at the end of a long day.

At night, they sleep in bunk beds – two sharing the top mattresses, two in the lower berths, in dormitories. 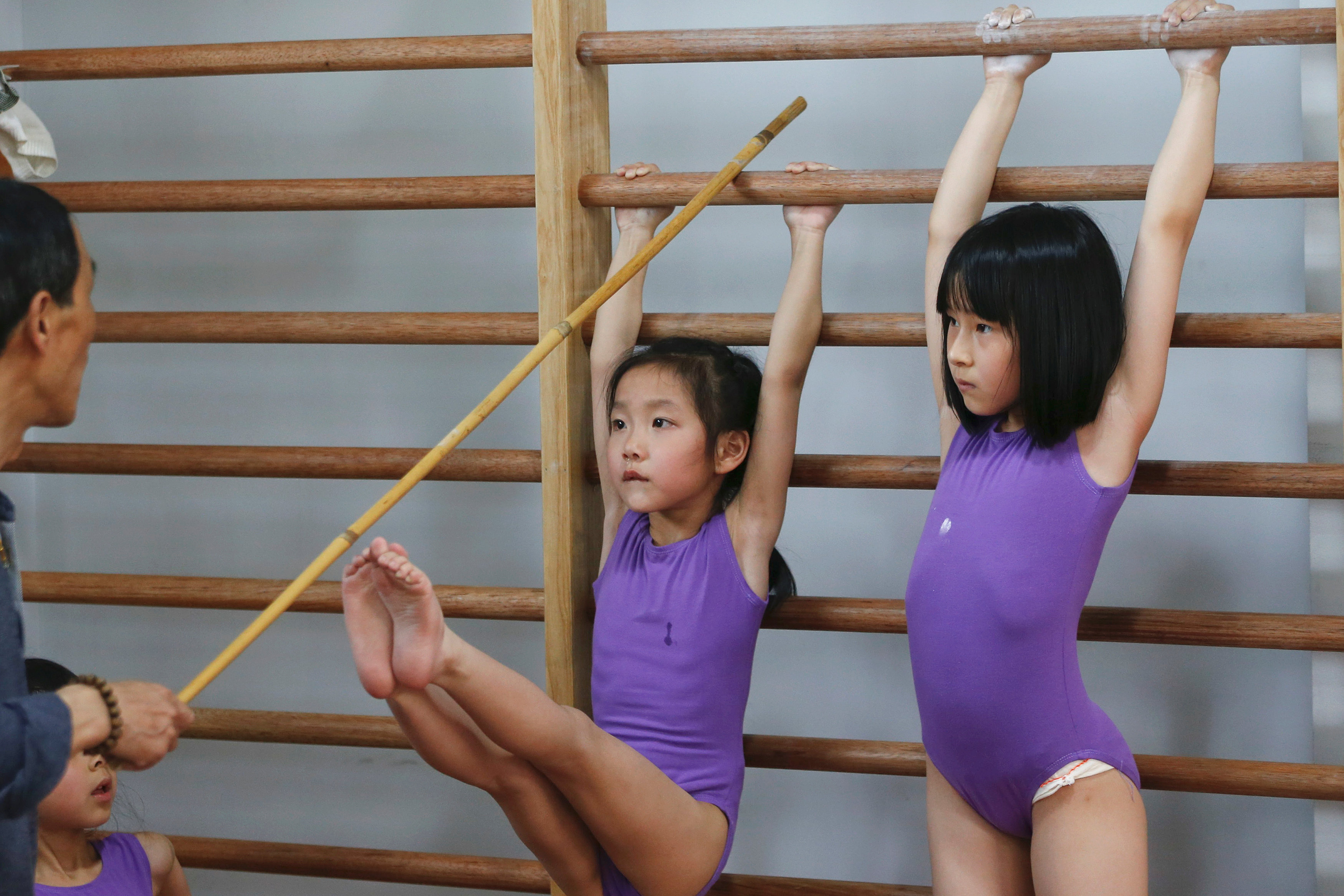 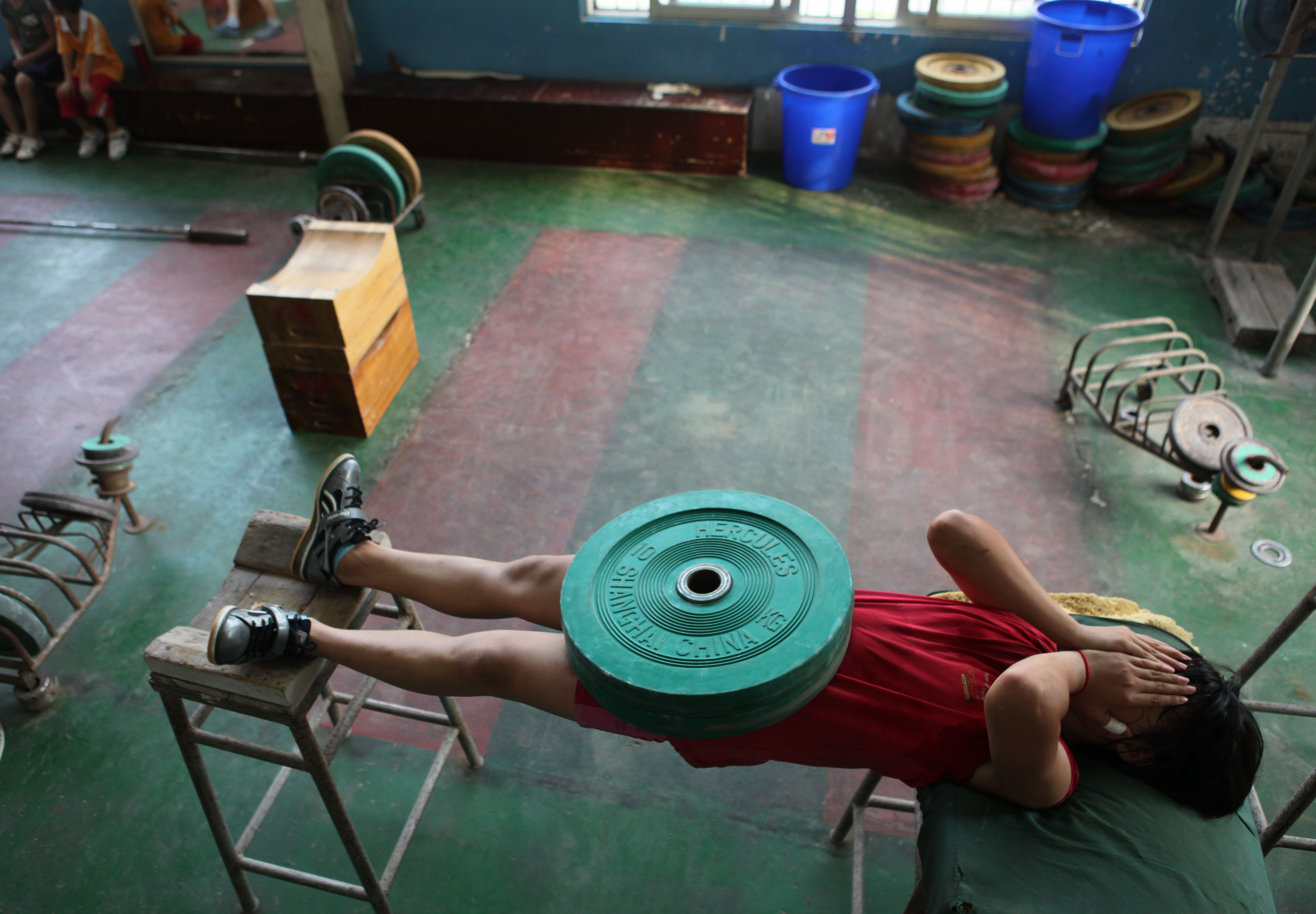 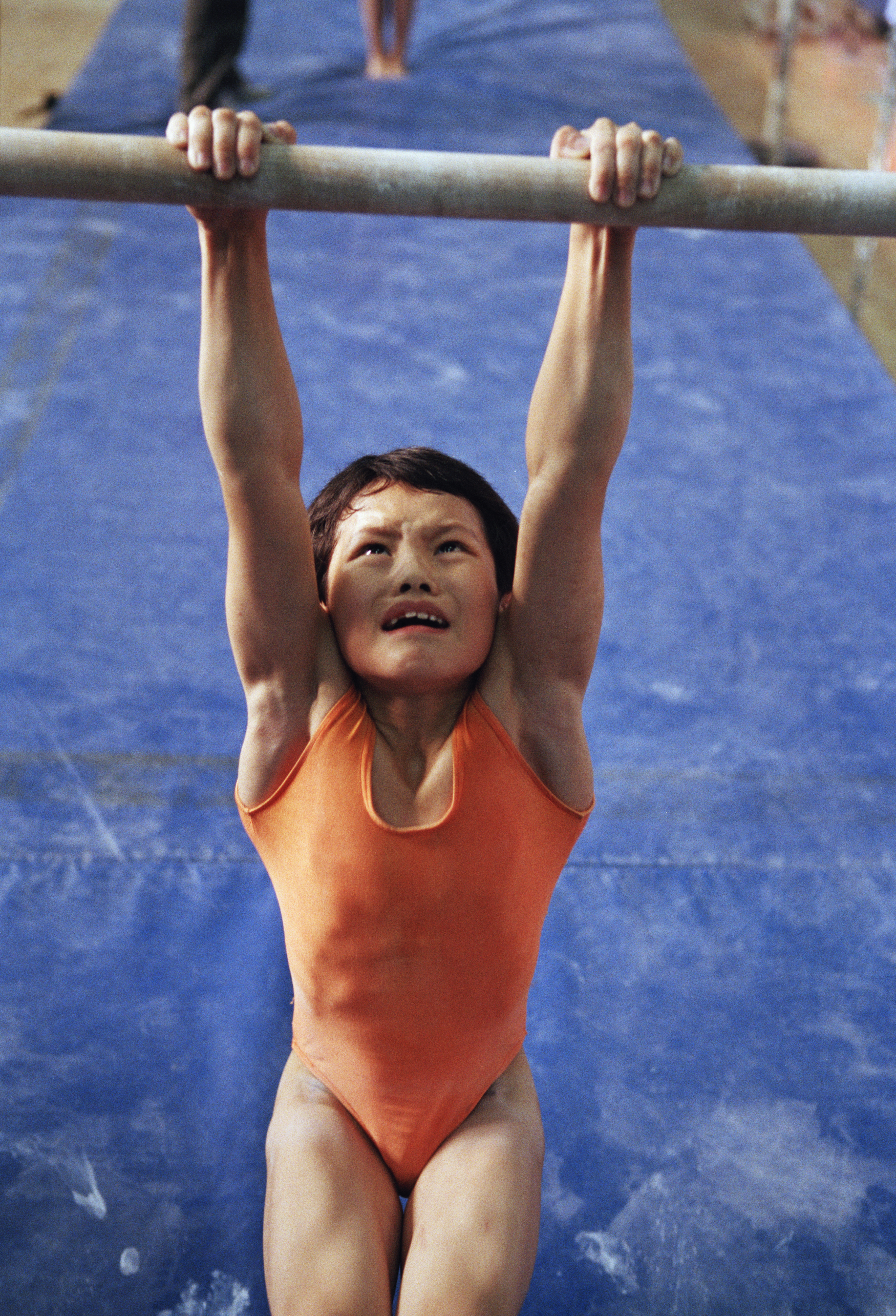 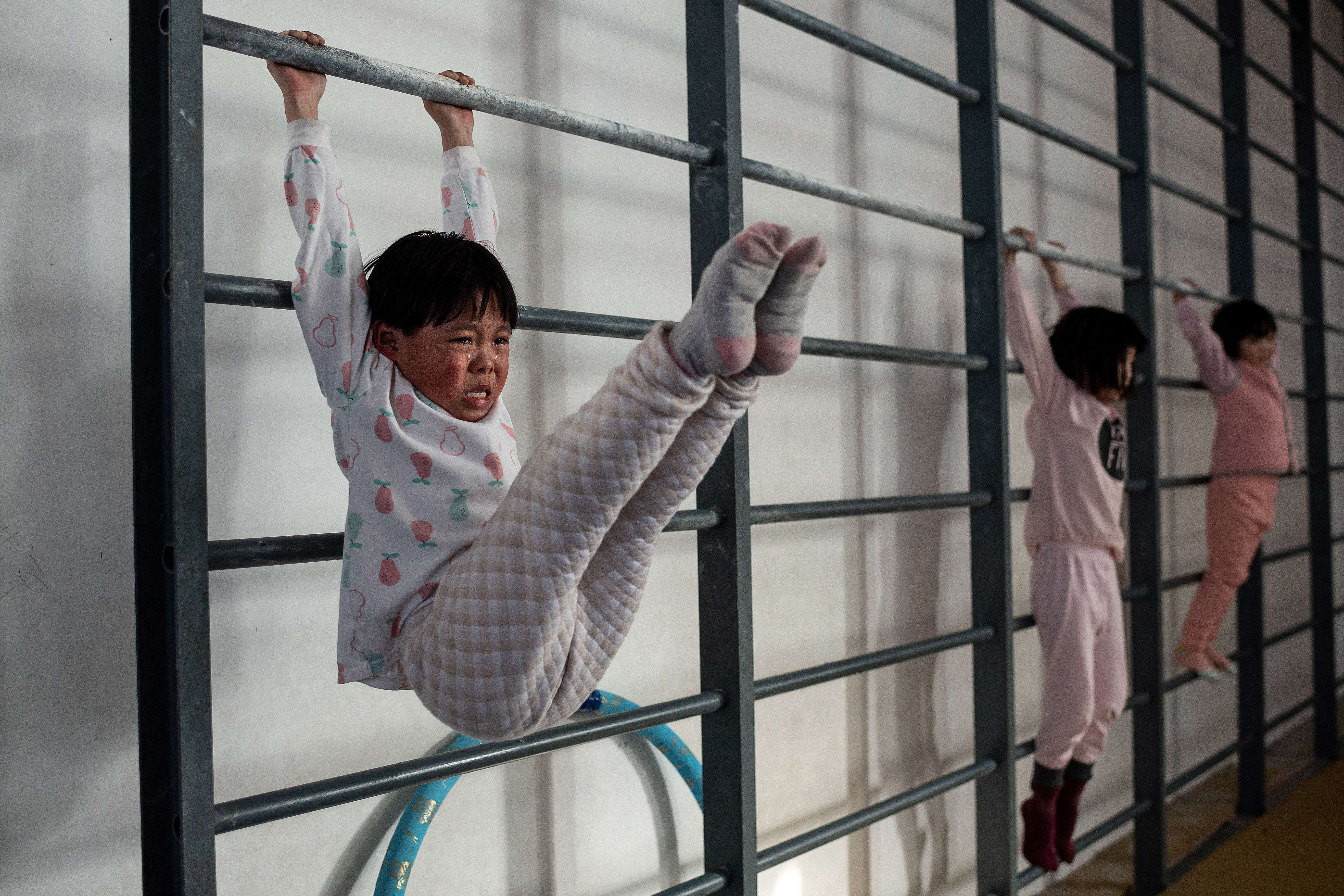 Children are selected by methods such as those who can stack bullets on their hands chosen for archery, and girls with long arms sent to weightlifting.

"Children from rural areas or from families that are not so good economically, they adapt well to the hardships," said one Chinese sporting official, reports the New York Times.

But academic teaching remains paltry and students are lucky to see their family a few times a year.

For those athletes that don’t succeed, a lack of education can mean life is hard.

And their young bodies have often been damaged by such intensive training at such a tender age.

Gymnastic stars are known for starting at an incredibly early age but other sports, such as weightlifting, also put kids through brutal regimes. 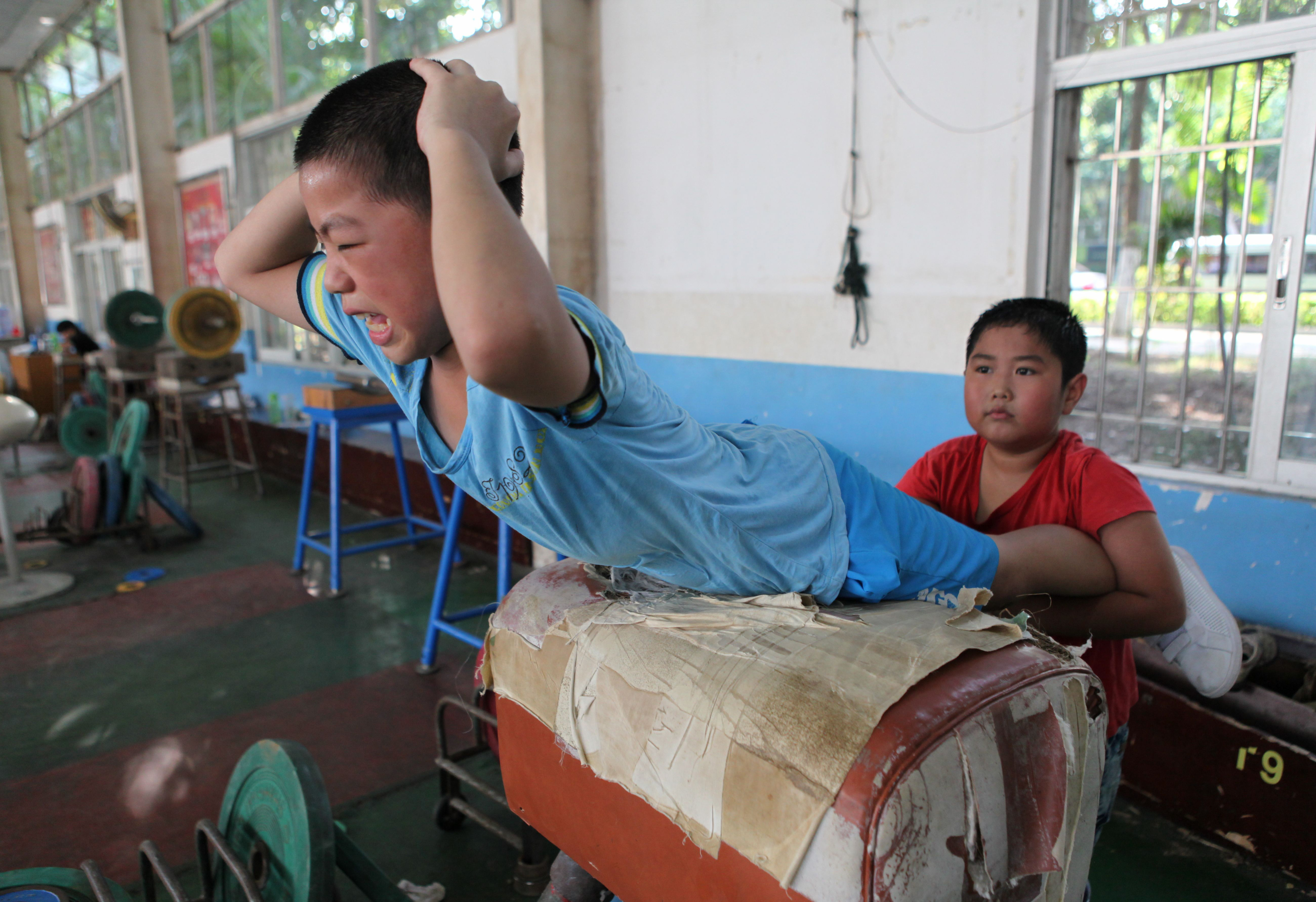 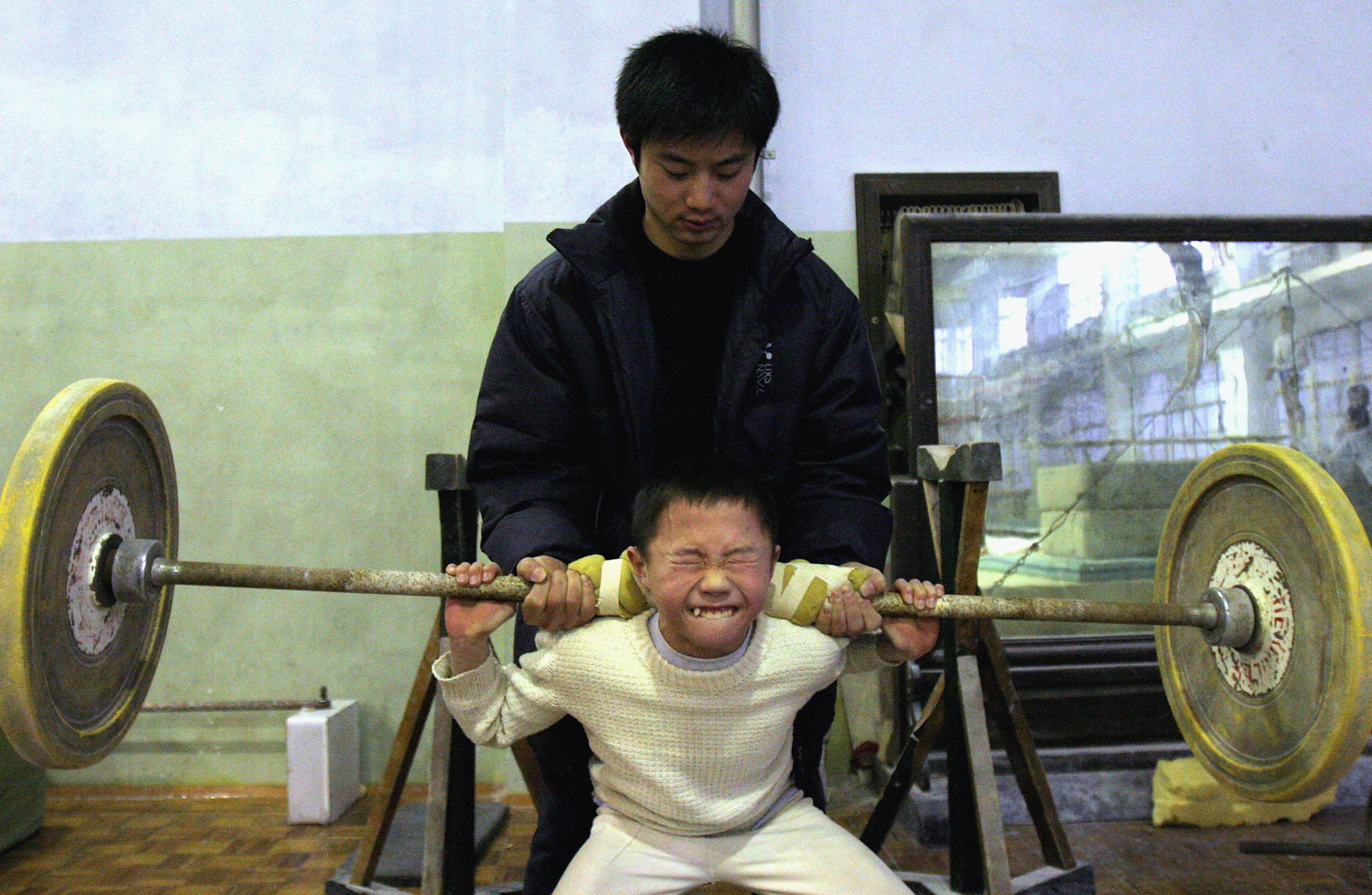 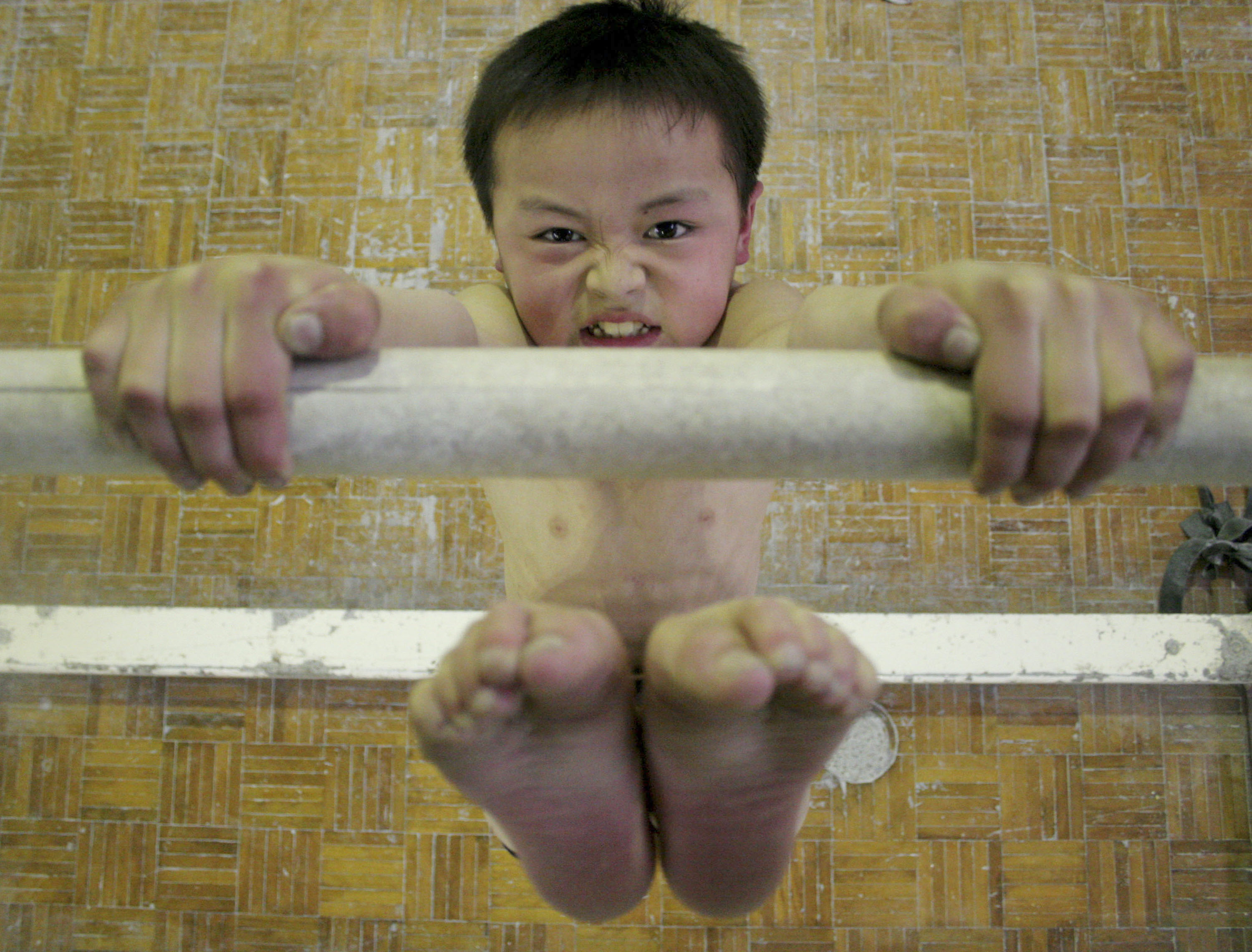 Another image shows a tiny boy with his feet and head on two chairs while his body supports a huge weight.

The pain is clearly unbearable and his hands are clasped over his face.

Beijing has focused on less prominent sports that are underfunded in the West or sports that offer multiple Olympic gold medals.

Women’s weight lifting, which became a medal sport at the 2000 Sydney Games, has become a focus for Beijing’s gold at all cost strategy with a human price to pay.

One former national champion was so impoverished after retirement that she ended up working in a public bathhouse.

She grew a beard, which she said was the result of a doping forced on her as a young athlete.

But this year's champion Hou Zhihui, 24, who has trained six days a week since she was 12, secured glory for China.

"The only thing we athletes think about is focusing on training," she said after winning gold.

China selects sports which rely on predictably and the individual to ensure the best chance of success – with the country never winning a gold in a team sport, aside from volleyball.

Chinese state media last week hit back at reports of Beijing's manufacturing of its athletes, bullishly boasting it showed "sour grapes" in the West and boasted the nation would "guard its leading position".

However, The Global Times – a popular newspaper often seen as the unfiltered voice of the Communist Party – was left with egg on its face as the US pulled ahead in the final table.

"In relation to all the positive vibes of the Chinese athletes and the mature mentality of Chinese fans, a few Western media outlets chose to turn a blind eye," it raged.

Meanwhile, Team GB finished in fourth place behind the US, China and host nation Japan with an impressive tally of 22 golds – despite having a population of just 66million.