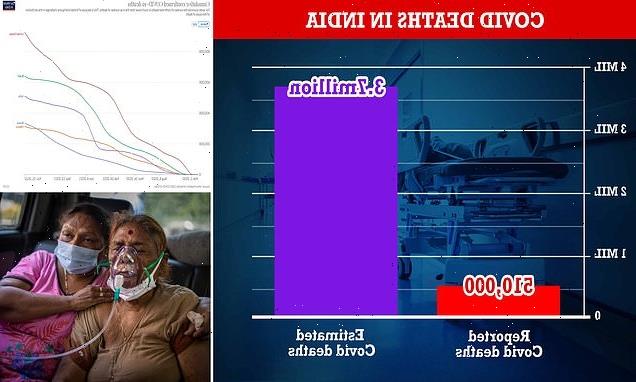 India’s Covid death toll could be as high as 3.7MILLION — the highest in the world and seven times the country’s official estimates, modelling suggests

If true, it would mean India has by far suffered the highest number of virus casualties in the world, and four times the amount in second worst-hit the US (922,000).

According to official records, roughly 510,000 Indians have died from the coronavirus since March 2020, giving it the third highest death toll in the world.

But now Professor Christophe Guilmoto, a population expert at the University of Paris, has upgraded the count by using a mathematical model.

He looked at Covid deaths in Kerala — India’s most developed state located in the south — which is the only one to publish them by age, sex and date of death, and applied the trends to the country’s 27 other states.

But Professor Guilmoto warned the death toll could be even higher than feared because his analysis is based on affluent areas, and not the poorer rural areas that were believed to have been hardest hit by the virus.

Indian ministers have reacted angrily to suggestions its Covid death toll is an under-estimate previously, slamming a report from The Economist that the actual toll is six times higher as ‘speculative’ and ‘misinformed’. But its tally is widely believed to be a major underestimate due to a lack of Covid testing in the country.

Scientists said the results underscored the ‘magnitude’ of the pandemic in India, and called for the country to scale up its vaccination drive and improve Covid surveillance across the country. 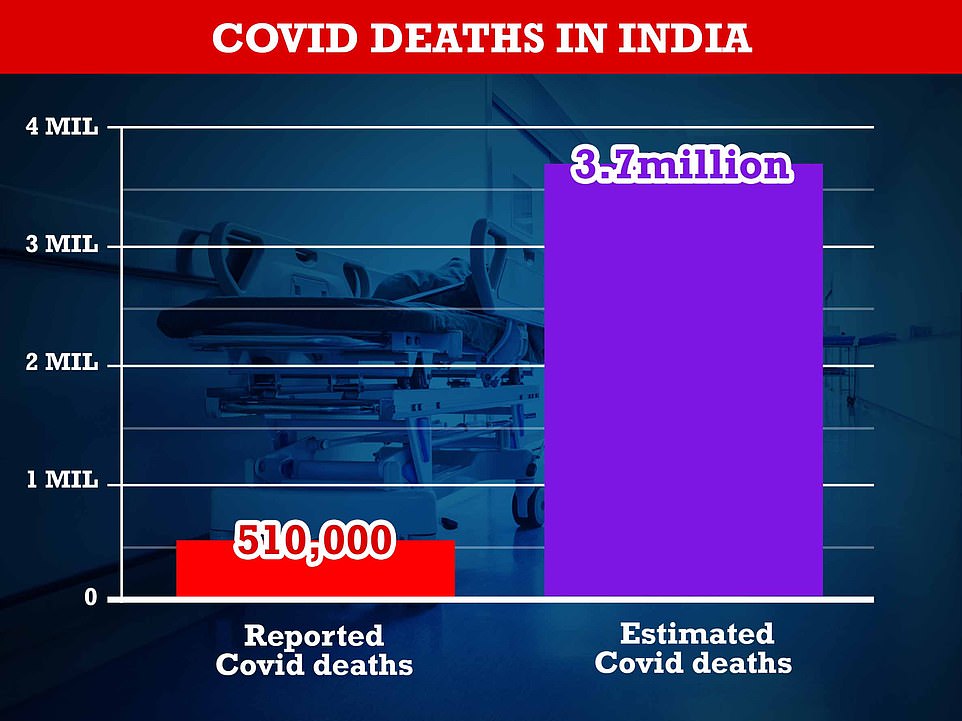 According to official records, roughly 510,000 Indians have died from the coronavirus since March 2020, giving it the third highest death toll in the world. But modelling suggests the country’s pandemic death toll may be as high as 3.7million — seven times official tally 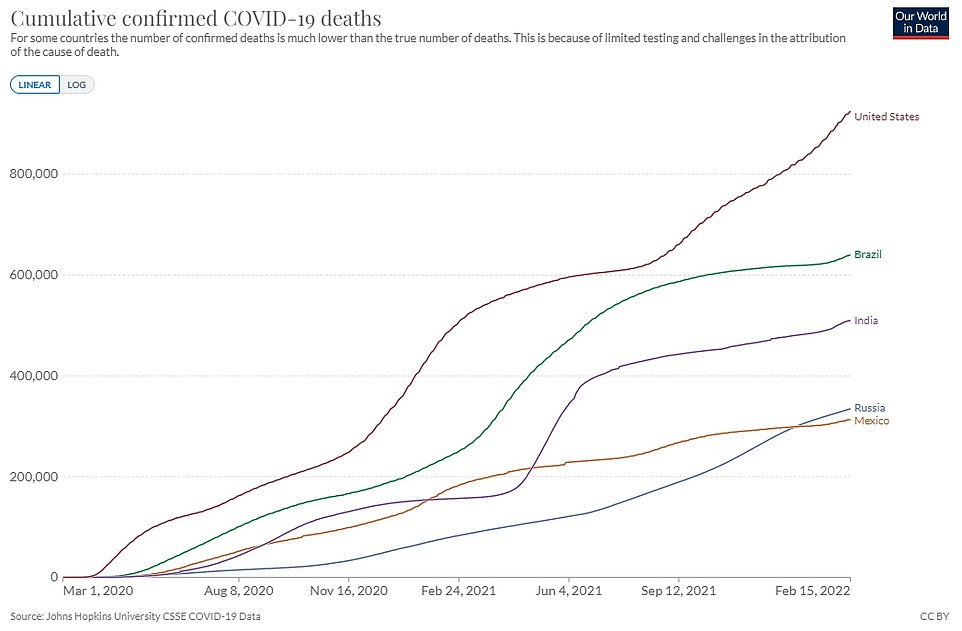 India currently has the third highest Covid death toll in the world, behind the US (780,000 deaths) and Brazil (614,000). But the scientist’s re-calculated death toll suggests it has suffered a much greater hit from the virus. The above shows the country’s with the top five Covid death tolls in the world 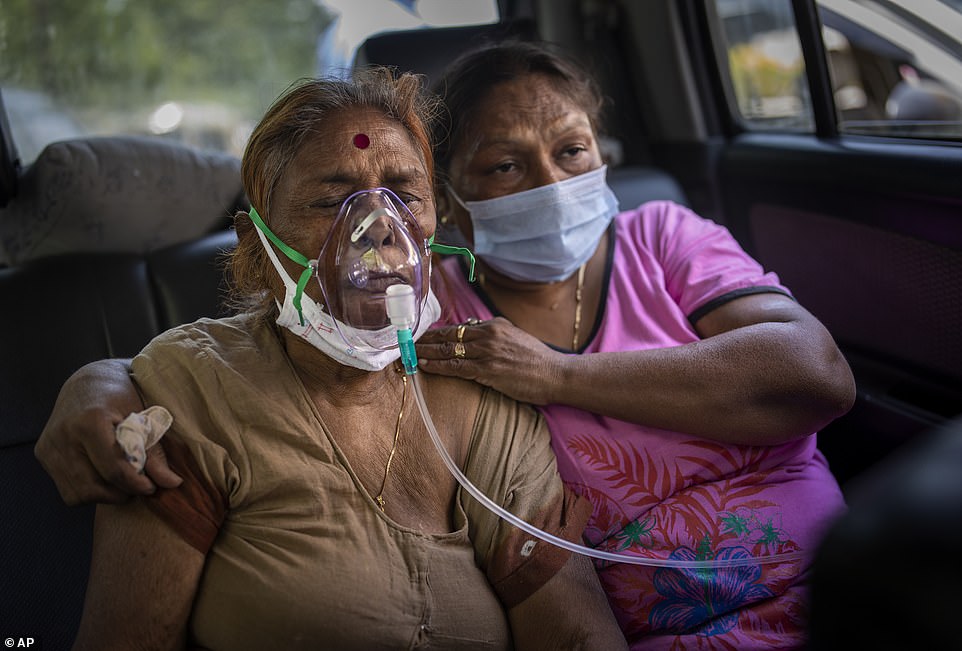 A woman receives oxygen inside a car provided by a Gurdwara, a Sikh house of worship, in Delhi in April when the Delta wave was hitting the country 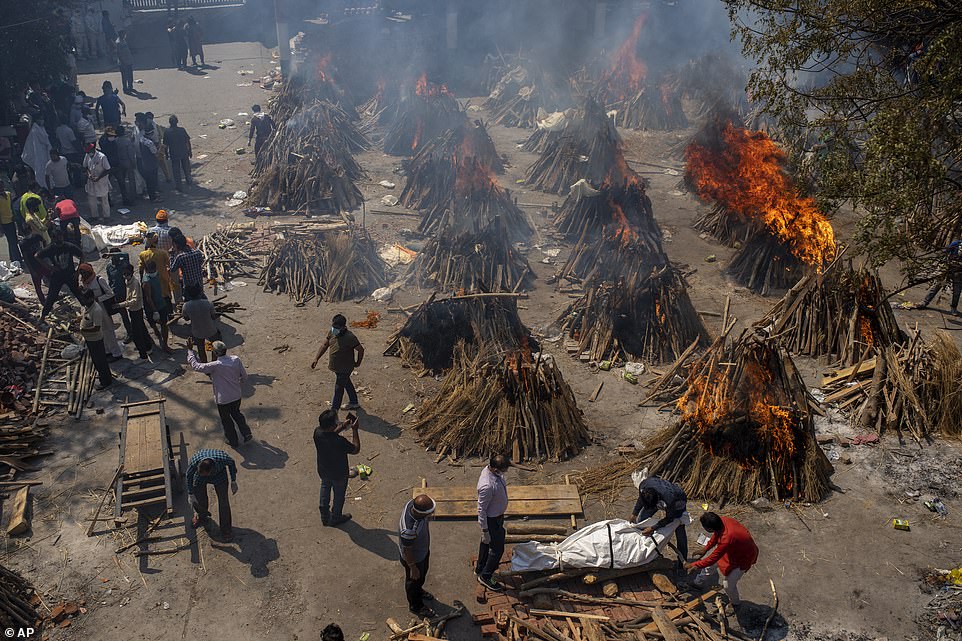 India currently has the third highest Covid death toll in the world, behind the US (780,000 deaths) and Brazil (614,000). When compared by population, it is 116th in the world — or in the bottom half of countries.

Brazil is also believed to be suffering from a similar level of under-reporting, because the country also has few swabs available to check patients for the virus.

India initially imposed a full lockdown along with much of the rest of the world in early 2020 to preserve its health services.

But unlike many countries in the West, it avoided the Alpha wave that winter — prompting suggestions parts of the country were already enjoying herd immunity.

When Covid first emerged in March 2020, India initially locked down along with much of the rest of the world.

But when the Alpha wave failed to materialise in the country — even as other nations were forced back into tighter restrictions  — a sense of optimism emerged.

Some experts wrongly suggested the country may have reached herd immunity, while others said India’s mostly young population was keeping the virus at bay.

The country’s politicians then threw caution to the wind, with the Prime Minister Narendra Modi holding a maskless political rally in the country.

A major Hindu festival that sees millions take pilgrimages to bathe in the river Ganges was also allowed to go ahead.

But around this time the Delta variant also emerged, and quickly spread round the country.

It led to hospitals being so overwhelmed with patients that they ran out of oxygen, and mortuaries were unable to keep up with the death toll.

But just as the country was declaring victory over the virus, cases suddenly sky-rocketed in Maharashtra — a state in the west of the country and home to its financial capital Mumbai.

Scientists were initially stumped as to what had caused the rise, but by early April they had detected a new variant — Delta.

Horrifying scenes of bodies piling up in streets or being burned in makeshift crematoriums quickly followed as the more transmissible mutant strain overwhelmed the country’s major hospitals.

And urgent calls for oxygen supplies were sent out by Indian health authorities, as bodies were pictured floating along the banks of the river Ganges.

India only does about 1 Covid test per 1,000 people each day, and never made mass community swabbing part of its pandemic response.

The lack of testing has left the country in the dark about the true number of people infected with Covid — and uncertainty over the death toll.

Antibody studies in India suggest about 70 per cent of people had had the virus by July last year — compared to the official tally showing less than 0.03 per cent of the population have tested positive.

Vaccination rates were also low, with less than three per cent of the country’s population fully jabbed when the Delta variant appeared.

Its jabbing drive has been hampered by ministers failing to place orders for Covid jabs early, despite it being one of the largest vaccine manufacturers in the world. Some 30 per cent of Indians are now double-jabbed.

In the study published in PLOS One, Professor Guilmoto looked at 26,268 Covid fatalities in Kerala — near India’s coastline with Sri Lanka — to estimate the Covid mortality rate by age and sex.

This was compared against 1,952 Covid deaths out of 1.3million workers at Indian Railways — one of the country’s largest employers which offered benefits to families of pandemic victims, encouraging them to come forward.

And it was also compared against 43 virus fatalities out of 5,837 politicians in Legislative Assemblies, the lower political houses in India’s 27 states, and 263 deaths from Covid reported among 190,000 teachers in Karnataka — a state bordering Kerala that has the sixth largest economy in India.

Using these figures Professor Guilmoto estimated the Covid fatality rate by age and sex for India, and then used this to estimate the actual pandemic death toll for the country.

Mr Guilmoto said: ‘The estimates point to a very high Covid mortality rate… The magnitude of the pandemic in India requires immediate attention.

‘In the absence of effective remedies, this calls for a strong response based on a combination of non-pharmaceutical interventions and the scale-up of vaccination to make them accessible to all, with an improved surveillance system to monitor the progression of the pandemic and its spread across India’s regions and social groups.’ 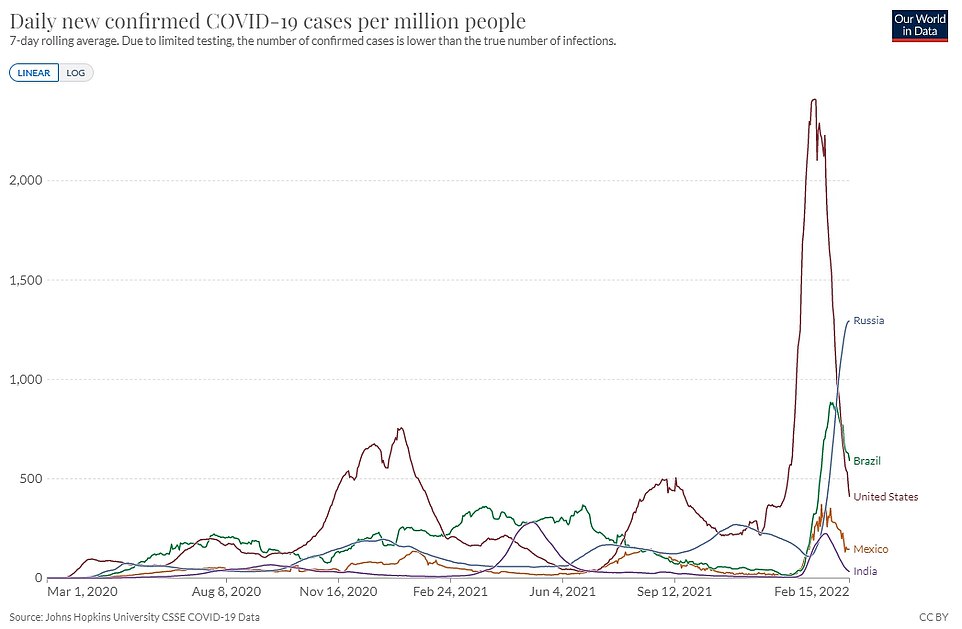 Pictured above are the Covid infection rates per million people across the countries with the top five Covid death rates in the world. It showed India had among the lowest infection rates, but this may be due to a lack of testing 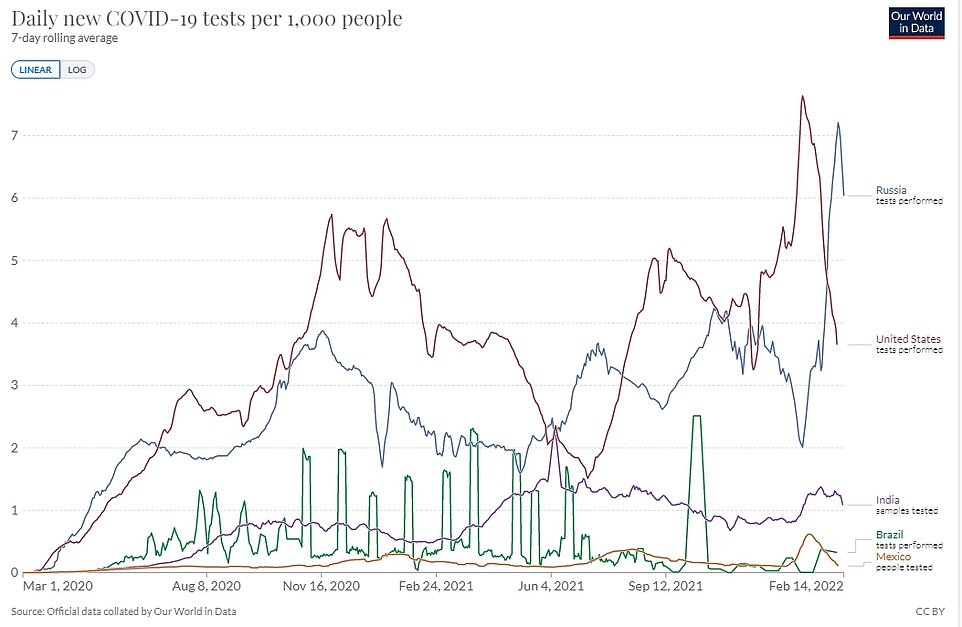 Pictured above is the Covid testing rate per 1,000 people across the countries with the top five Covid death rates globally

Mr Guilmoto is an expert on India’s population, after completing a three-year PhD on the population history of South India and spending five years working at the French Institute in Pondicherry.

He is currently based at the Centre de Sciences Humaines in New Delhi, the country’s capital, which investigates population structures and economics both in India and neighbouring nations.

India’s Government has previously slammed suggestions that its Covid death toll is about seven times higher than the official tally, which was reported by The Economist magazine in June last year.

Its health ministry said: ‘It is a speculative article, which is without any basis and seems to be misinformed. The unsound analysis of the said article is based on the extrapolation of data without any epidemiological evidence.’

Separate studies have also suggested India’s death toll is much higher than reported, with one from US researchers published last summer suggesting it was between 3.4 and 4.7million.