Warning: This story contains graphic content, and the name and images of a deceased Indigenous person.

A prison nurse who held concerns about inmate Veronica Nelson’s health before she was found dead in her cell says basic medical checks were not made despite welfare issues being raised.

During confronting evidence on Monday at an inquest into Nelson’s death, nurse Stephanie Hills told the coroner that when she raised concerns about the new inmate’s presentation, the on-duty doctor dismissed her observations, telling her “you’re just a nurse”. 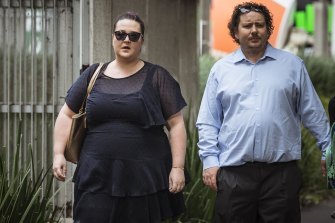 Nurse Stephanie Hills (left) arrives to give evidence at the Coroners Court of Victoria on Monday.Credit:Chris Hopkins

“I made it quite clear to Dr Sean [Runacres] my concerns … and I was put back into my place,” she said. “It was, ‘I’m the doctor, I will make the decisions.’ ”

Coroner Simon McGregor is investigating Nelson’s death. The Indigenous woman was remanded in custody after being refused bail for alleged shoplifting and bail offences. Soon after, she was taken to Dame Phyllis Frost Centre where she spent a night in a medical cell before she was cleared and moved to the general population.

On Monday, the inquest heard for the first time from Hills, who had been working at the women’s prison when Nelson arrived on New Year’s Eve in 2019.

The nurse said she was so concerned about Nelson, who was suffering an undiagnosed medical condition and withdrawing from heroin, that she told her colleague – Dr Sean Runacres – that the 37-year-old needed hospital treatment.

Hills said she had grown alarmed at learning of Nelson’s low blood pressure and heart rate, revealing the new arrival was disoriented, incoherent, complaining of stomach pain and fading in and out of consciousness.

Under questioning from counsel assisting the coroner Sharon Lacey, Hills said that during Nelson’s initial medical examination, which lasted just 13 minutes, the doctor failed to perform basic health checks including to the inmate’s chest, heart and abdomen, or to place her on the examination table. 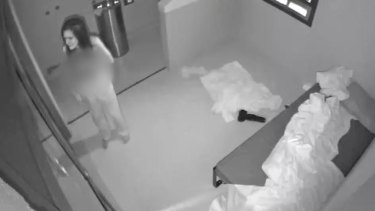 A still from a video released during the inquest showing Veronica Nelson inside a prison cell.

But a medical form, presented to the inquest, showed entries were made for each of these categories, including that Nelson weighed 40.7 kilograms, in contrast with her autopsy reading of 33 kilograms.

Hills said it was not possible these assessments were made, with the doctor remaining in his chair throughout the examination while Hills attempted to hold Nelson up. She said Nelson could not even walk to the scales to be weighed and was slumped in a chair during the examination.

Nelson was told to sign a consent-to-healthcare form, but Hills said it was never explained to her what she was signing and the nurse had to help her hold the pen.

“[Nelson] wasn’t understanding of the questions that were being asked of her. She could barely respond or talk,” Hills said.

Soon after that interaction, the inquest heard, Runacres cleared Nelson to be moved out of medical and into a general population cell in the Yarra Unit.

Pausing throughout her recollections, Hills revealed this was not the first time she believed Runacres had failed to perform a full and adequate assessment of new prison arrivals.

Friends and family of Nelson sobbed and wiped away tears as details of her final interactions with staff were revealed at the inquest.

Hills cried as she said that when the doctor left the prison at 5.30pm, she defied his orders and told night staff to keep Nelson in a medical cell overnight.

Ultimately, though, Nelson was moved to the Yarra Unit about 24 hours later, where she later died.

An autopsy found she had Wilkie syndrome, which restricts a person’s arteries.

On Monday, Hills said that despite her concerns for Nelson, a “medical hierarchy” meant she did not defy the doctor and call an ambulance.

“The doctor decided that she was well enough to stay in the prison and not go to hospital, so I was guided by that,” she said.

Runacres is expected to give evidence on Wednesday.

Images and audio contained in this story were released to the media with permission from the family. For 24/7 crisis support run by Aboriginal and Torres Strait Islander people, contact 13YARN (13 92 76).

02/05/2022 World News Comments Off on ‘I’m the doctor, I will make the decisions’: Nelson health check inadequate, coroner told
Markets