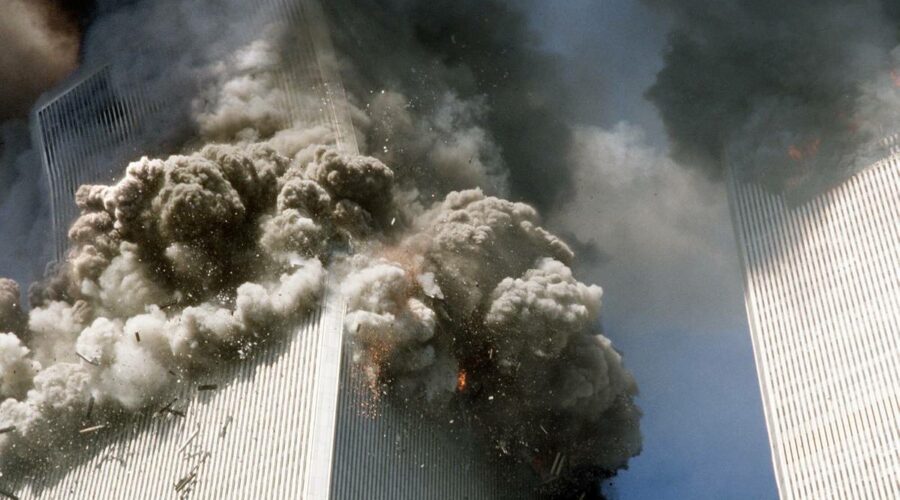 When the Twin Towers fell, Brendan Greeley ran. This is his story .

When the South Tower started to fall I was the last to turn, rooted on Cedar Street for maybe a second as people streamed past me. Then I ran, just fast enough, in the right direction. I stopped behind a bagel cart on Nassau Street and then a low glass wall on Chase Manhattan Plaza, and then the cloud hit me, black and heavy. I found an open door, I still don’t know how, and stepped through it.

It was just a drawing of lots. A lot of people died. I watched them die. I know the soft thud of each floor collapsing in turn. People around me died. I assumed I would die. And then I didn’t. There is a hierarchy of grief and I know my place in it. I lost no one. I never fought in the wars that followed. I never came home from those wars missing a limb or a friend. I just stumbled around lower Manhattan for two hours.

When I heard the North Tower go, I tried to fling myself through a glass door into a copy shop for safety. I bounced off, humiliated in the middle of my own terror. Someone told me to go to a hospital and the instructions were a relief. I moved oxygen tanks, pushed people in wheelchairs from triage up on to the wards. I helped someone into an ambulance that had arrived from an Orthodox Jewish community in Queens. Then there were no more people and I walked across the Brooklyn Bridge and into the rest of my life.
If you grew up white and American at the end of the 20th century, you grew up knowing that nothing bad would ever happen to you. An accident, perhaps — a tragedy, but not a catastrophe. And so all I did on the morning of September 11 was become one of those people that bad things happen to. It is a large group of people. It includes most of the people in the world.

I was 26 years old then. I’m 46 now, with a wife and four children. I told myself that what happened mattered less to me with each passing year. Then last month, with everyone else in the house asleep, I began to think about details. Dust. Thuds. Screams. I sat alone in my basement and wept, heaving, uncontrollably, in waves for about an hour. And then I opened my bedroom door, woke up my wife and told her I wasn’t over it. How could I be?
I think of terrorism now as pure performance. I don’t take the ostensible political goals of any terrorist seriously, because I don’t think they do, either. Terrorism is simply a display of potence. It is always theatrical, with proclamations and flourishes, because that’s the point. It’s a one-act play with a single message: I can do this, you have to watch and you will always remember. I’m left now with a loathing for any kind of theatrical politics — flags, costumes, armed patrols, street brawls, occupations, even a fist pounding on a desk. I’ve lost the patience to watch anyone play at revolution.

After 2001, I spent a year in denial, then left my job in reinsurance and drank for two years until I ran out of money. I thought about killing myself but my mum made me promise I wouldn’t, so then I couldn’t. And so I began the slow process of starting from scratch, as a journalist. One of the pleasures of this job is that you get to meet people who actually fix problems. I’ve found those people aren’t that dramatic. Actual change is boring. It asks for dogged resilience and attention to detail. It measures victory in tedious little steps.

I still love actual theatre. I’ll sit in the dark and watch pretty much anything, grateful for small moments of beauty. In 2000 I saw Philip Seymour Hoffman in Sam Shepard’s . Just after the lights went down, ushers hustled Sean Connery into the audience and seated him two rows in front of me. In the second act, Seymour Hoffman plugged in a stage full of toasters that his character had stolen, and filled them with slices of bread. The bread actually toasted, and I thought “I smell toast right now, and so does Sean Connery.” I will be grateful for that moment for ever. I will remember it for ever.

That is the unforgivable problem with terror. It’s a performance you have to remember for ever. I am one person, of thousands standing there, 20 years ago. I lived and walked away, and that moment sometimes still arrests me. I remain captive, in a seat in the dark. A group of young men staged a play about how virile and important they were, and one small consequence of all that destruction is that they wasted years of my life. I get to have a wife and children. I used to think that meant I won. I also still live with long bouts of depression. I’ve got better at managing it, but I didn’t win. Nobody wins.

In 2015, I went to Paris to cover the aftermath of some more kids who thought it would be cool to kill people. They, too, staged it dramatically, shooting literally into a theatre in the dark. On the last night I was there, I talked to a bartender who had pulled screaming, fleeing Parisians into his basement for shelter. He had the flat affect of someone who’s watched something horrible and hasn’t even begun to think it through. I told him the only thing I could, the only thing I knew was true. You will never forget this. You will never be completely OK. I’m sorry.