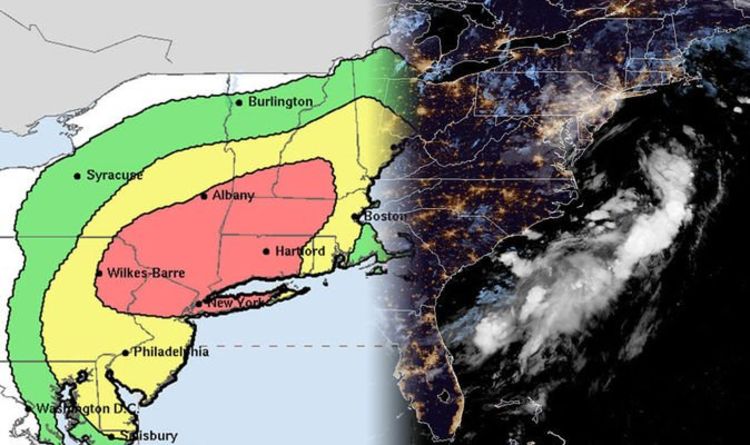 Hurricane Henri weakened to a tropical depression on Sunday, but is still forecast to dump enormous amounts of rain over populated areas on Monday, with flash flooding a risk. US President Joe Biden said he had approved emergency declarations to aid Rhode Island, Connecticut and New York, if necessary.

The National Hurricane Center (NHC) from the  National Oceanic and Atmospheric Administration (NOAA) said Henri came ashore in the town of Westerly around 12.30pm EDT (5.30pm BST) on Sunday.

The NHC now describes Henri as “slow-moving”, which poses the risk of “heavy rainfall and flooding” across portions of southern New England and the Northern mid-Atlantic states throughout Monday.

The NHC added in its latest public advisory: “On the forecast track, Henri is expected to slow down further and possibly stall near the Connecticut-New York border tonight, then move across Massachusetts on Monday afternoon and Monday night and over the Atlantic on Tuesday.”

Rainfall is expected to be the biggest hazard, as well as strong surf in coastal areas.

The NHC is forecasting three to six inches of rainfall, with “locally higher amounts expected” on Monday.

The NHC said: “Isolated maximum totals of 10 to 12 inches are possible across northern New Jersey into southern New York.

“Heavy rainfall from Henri will continue to result in considerable flash, urban, and small stream flooding, along with the potential for additional minor to isolated moderate river flooding.”

As well as the heavy rain expected, strong surf is expected to continue across much of the east coast of the US and Atlantic Canada tonight and into Monday.

The NHC warned, “these swells could cause life-threatening surf and rip current conditions.”

President Biden said emergency declarations had been approved if necessary in the affected states.

He said: “While New Englanders are used to dealing with some tough weather.

“This storm has the potential for widespread consequences across the region with significant flooding and power outages that could affect hundreds of thousands of people.”

On Sunday, Rhode Island briefly shut down major bridges, and all roads to the beach community of Misquamicut were closed because of wind-driven flooding.

The storm was downgraded from a hurricane before making landfall but still packed gusts of up to 75mph.

By Sunday afternoon, more than 82,000 electric customers in southern New England were still without power, including 61,000 in Rhode Island, according to PowerOutage.US, which collects data from electric utility companies.

The storm’s slowdown and prolific rain production over an area already saturated with rain prompted concerns from area governors about flooding in New York’s Hudson River Valley and western Connecticut.

Towns throughout New Jersey reported heavy rains and street flooding, with some getting as much as eight inches by midday Sunday.

Major airports remained open as the storm approached, though hundreds of flights were cancelled.

Service on some branches of New York City’s commuter rail system was suspended, as was Amtrak service between New York and Boston.